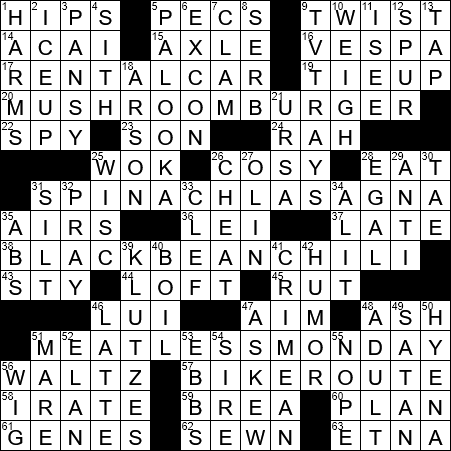 Each of the themed answers in this MONDAY puzzle is a common dish that has been made MEATLESS:

9. Turn into a pretzel : TWIST

Vespa is a brand of motor scooter originally made in Italy (and now all over the world) by Piaggio. “Vespa” is Italian for “wasp”.

Thrifty Car Rental was founded back in 1958. Thrifty became part of Chrysler in 1989 and was merged by Chrysler with Dollar Rent A Car the following year.

The Budget Rent a Car company started out in 1958 with the intent of undercutting the existing price of renting a car at airports. Budget was founded by Morris Mirkin. Mirkin enlisted Julius Lederer as a co-founder the following year. Lederer was the husband of newspaper columnist “Ann Landers”.

The French call a ball made of tufted wool a “pompon”, a word that we imported into English directly as “pompon”. We use “pompon” to describe perhaps bobbles on some hats, or the tufted balls that are shaken by cheerleaders at sports events. Over time, the spelling “pompom” has become common in English, probably due to mishearing. To confuse matters a little, we also use the word “pom-pom”, which is a nickname for a British autocannon used mainly as an anti-aircraft weapon, particularly during WWII.

A tea cozy (sometimes “cosy”) is an insulated cover for a teapot, something to keep the tea hot. I don’t know what I’d do without my tea cosy/cozy …

Lasagna was originally the name of a cooking pot, but it came to mean a dish that was cooked in it. Lasagna also became the name of the flat noodle used in the dish. If you order lasagna on the other side of the Atlantic, you’ll notice the “lasagne” spelling, the plural of “lasagna”. The plural is used as there is more than one layer of pasta in the dish.

To help the war effort, the United States Food Administration (led by Herbert Hoover) introduced “Meatless Tuesdays” and “Wheatless Wednesdays” for the duration of WWI. Similar campaigns were revived during WWII. Wheatless Wednesdays have fallen by the wayside but Meatless Monday is very much in vogue these days as an attempt to improve the population’s health and help reduce global warming (less methane from fewer cows).

Mount Etna on the island of Sicily is the largest of three active volcanoes in Italy. Etna is about 2 1/2 times the height of its equally famous sister, Mt. Vesuvius. Mt. Etna is home to a 110-km long narrow-gauge railway, and two ski resorts.

The garden flower called the “pansy” takes its name from the French word “pensée” meaning “thought”. This name was chosen as the flower was often used as a symbol of remembrance.

A convict (con) might be incarcerated in the penitentiary (pen).

Lena Olin is a Swedish actress, and clearly someone who had acting in her blood. Her mother was the actress Britta Holmberg and her father the actor and director Stig Olin. Olin had a very successful career in Sweden, often working with the great Ingmar Bergman. Olin’s breakthrough international and English-speaking role was playing opposite Daniel Day-Lewis in “The Unbearable Lightness of Being” released in 1988. Way back in 1974, the lovely Miss Olin was crowned Miss Scandinavia in a beauty pageant for Nordic women held in Helsinki, Finland.

“Égal” (feminine “égale”) is the French word for “equal, alike”, and a word we sometimes use in English. The national motto of France is “Liberté, égalité, fraternité”, meaning “Liberty, equality, fraternity (brotherhood).

The abdominal muscles (abs) are more correctly referred to as the rectus abdominis muscles. They are all called a “six-pack” in a person who has developed the muscles and who has low body fat. In my case, more like a keg …

A klutz is an awkward individual, and the term comes from Yiddish. The Yiddish word for a clumsy person is “klots”.

Samuel Langhorne Clemens was the real name of the author Mark Twain. Twain wasn’t the only pen name used by Clemens. Early in his career he signed some sketches as “Josh”, and signed some humorous letters that he wrote under the name “Thomas Jefferson Snodgrass”. The name of Mark Twain came from the days when Clemens was working on riverboats on the Mississippi. A riverboatman would call out “by the mark twain” when measuring the depth of water. This meant that on the sounding line, according to the “mark” on the line, the depth was two (“twain”) fathoms, and so it was safe for the riverboat to proceed.

Our word “élan” was imported from French, in which language the word has a similar meaning to ours, i.e “style” or “flair”.

9. Turn into a pretzel : TWIST

47. Completely finishing this crossword, to you : AIM

2. Freeze over, as airplane wings : ICE UP

40. Directive in a pasta recipe : BOIL