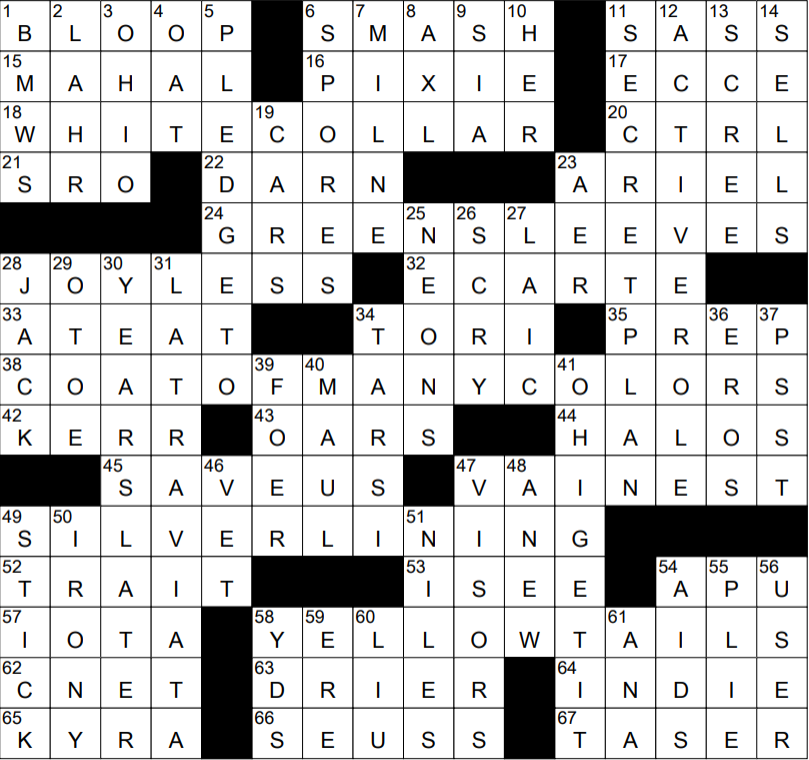 The MANY themed answers each start with a COLOR and end with part of a COAT:

In baseball, a bloop single is more usually called a blooper. It’s a fly ball that drops for a single between an infielder and an outfielder.

Friedrich Nietzsche was a German philosopher. He’s not my cup of tea …

We are perhaps most familiar with blue-collar and white-collar classifications for groups of workers. There are many more “collar colors” that have been coined:

The rather delightful English ballad known as “Greensleeves” starts with:

Alas, my love, you do me wrong,
To cast me off discourteously.
For I have loved you well and long,
Delighting in your company.

There is a persistent urban legend that “Greensleeves” was written by King Henry VIII for Anne Boleyn when he was courting her. In fact the song was more likely written after the king’s death, in the Elizabethan era.

According to the Bible, Joseph was the eleventh of Jacob’s twelve sons. Ten of Jacob’s sons were borne by his first wife Leah, and two by his second wife Rachel. Joseph was Rachel’s firstborn. Joseph proved to be Jacob’s favorite son, to whom he gave a “long coat of many colors”. Joseph’s half-brothers plotted against him and sold him into slavery. This Biblical story is retold in the hit musical by Andrew Lloyd Webber and Tim Rice called “Joseph and the Amazing Technicolor Dreamcoat”.

Oarlocks are swiveling braces on the sides of a rowing boat that hold the oars as the boat is being propelled. Back in Ireland, we call them “rowlocks” (pronounced “rollox”).

49 Upside, when down : SILVER LINING

The Japanese amberjack is also known as yellowtail in English, and “hamachi” or “buri” in Japanese. It might show up on a menu as “yellowtail tuna”, but it isn’t even in the same family as true tuna.

Actress Kyra Sedgwick is perhaps best known for playing Deputy Chief Johnson, the lead character on the crime drama show “The Closer”. Sedgwick married fellow actor Kevin Bacon in 1988. Sedgwick appeared on a family history show, and discovered that she and her husband are cousins, albeit tenth cousins once removed. I bet that was a surprise …

7 Children’s author who wrote “People say nothing is impossible, but I do nothing every day” : MILNE

Guns N’ Roses (GNR) is a hard rock band founded in 1985 that is still going strong. The group was pulled together by Axl Rose, the lead vocalist. The lead-guitar player back then was Tracii Guns, and it was the combination of Axl and Tracii’s “family” names that led to the band being called Guns N’ Roses.

“Cheap Thrills” is a 2015 song that was the first number-one hit in the US for Australian singer/songwriter Sia.

“Sia” is the stage name of Australian singer Sia Furler from Adelaide. She is a cousin of Australian Christian Rock musician Peter Furler. Sia is a very private person, and even covers her face with a blond wig while performing.

When a rock face erodes, lumps of rock and dust fall to the ground. The pile of rocks gathered around the rock face is called “scree”, a word derived from the old Norwegian term for a landslide.

26 Prognosticate with a crystal ball : SCRY

“Vet” is an abbreviation for “veterinarian”, a professional who treats animals for disease and injury. The word “veterinary” comes from the Latin “veterinae” meaning “working animals, beasts of burden”.

In the sitcom “Frasier”, Niles Crane is the brother of the title character Frasier Crane. Frasier is played by Kelsey Grammer and Niles is played by David Hyde Pierce. Frasier was originally intended to be an only child in the show’s storyline, but the producers decided to add a brother when they noted the remarkable similarity in appearance between David Hyde Pierce and Kelsey Grammer.

In football, aspects of a running back’s (RB) performance is measured in yards (yds).