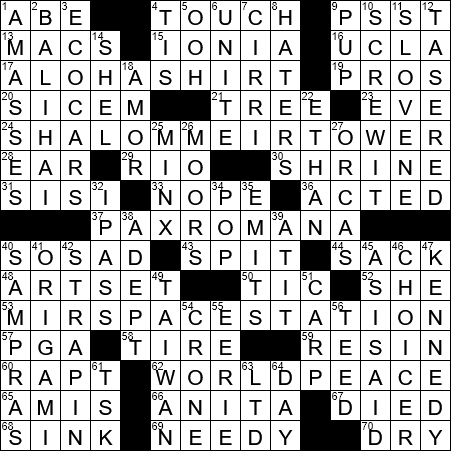 CROSSWORD CONSTRUCTOR: Timothy Polin
THEME: World Peace
Each of today’s themed answers starts with a word for PEACE written in a foreign language from somewhere in the WORLD:

Today’s Wiki-est, Amazonian Googlies
Across
1. Emancipation Proclamation prez : ABE
The Emancipation Proclamation was issued by President Abraham Lincoln on January 1, 1863 during the Civil War. The order freed slaves in Confederate territory, but did not apply to the five slave states that were not in rebellion. Slavery became illegal in the whole of the United States in December 1865 when the Thirteenth Amendment to the US Constitution was ratified.

13. Apple computers : MACS
Macintosh (also “Mac”) is a line of computers from Apple Inc. The first Mac was introduced in 1984, and I remember someone showing me one at work in those early days of personal computing. There was a piece of white plastic connected to the main computer by a cord, and I was amazed when the guy showed me that it controlled where the cursor was on the screen. My colleague told me that this lump of plastic was called “a mouse” …

15. Ancient land in Asia Minor : IONIA
The geographic region called Ionia is located in present day Turkey. Ionia was prominent in the days of Ancient Greece although it wasn’t a unified state, but rather a collection of tribes. The tribal confederacy was more based on religious and cultural similarities than a political or military alliance. Nowadays we often refer to this arrangement as the Ionian League.

16. The Bruins of the N.C.A.A. : UCLA
The UCLA Bruins’ mascots are Joe and Josephine Bruin, characters that have evolved over the years. There used to be “mean” Bruin mascots but they weren’t very popular with the fans, so now there are only “happy” Bruin mascots at the games.

24. Tel Aviv skyscraper that was the first to be built in the Mideast : SHALOM MEIR TOWER (“shalom” is “peace” in Hebrew)
The Shalom Meir Tower is an office block in Tel Aviv. Construction on the tower was completed in 1965, at which time it was the tallest building in the Middle East. It has 34 floors and a height of 466 ft.

29. ___ de Janeiro : RIO
Rio de Janeiro is the second largest city in Brazil (after São Paulo). “Rio de Janeiro” translates as “January River”. The name reflects the discovery of the bay on which Rio sits, on New Year’s Day in 1502.

37. Long, tranquil period ushered in by the emperor Augustus : PAX ROMANA (“pax” is “peace” in Latin)
“Pax Romana” is Latin for “Roman Peace”. The term literally described a period in Roman history for the 1st and 2nd centuries AD during which the Roman Empire was ruled by Caesar Augustus. Under his control, expansionist ideas by powerful generals were held in check, and the peoples of foreign lands ruled by the Romans were relatively calm. The peace enjoyed was considered uneasy as Rome governed its conquered territories with an iron fist, and insurrection was likely at all times. The expression “pax Romana” then came to be used in English to describe any situation in which there is an uneasy peace, a peace imposed by a powerful state on a weaker state.

52. “That’s all ___ wrote” : SHE
No one seems to be very certain of the origin of the phrase “that’s all she wrote”. One popular story though is that it stems from the unfortunate “Dear John” letters that some soldiers received during WWII.

53. Orbiter from 1986 to 2001 : MIR SPACE STATION (“mir” is “peace” in Russian)
The Russian Mir Space Station was a remarkably successful project, with the station still holding the record for the longest continuous manned presence in space, at just under ten years. Towards the end of the space station’s life however, the years began to take their toll. There was a dangerous fire, multiple system failures, and a collision with a resupply ship. The Russian commitment to the International Space Station drained funds for repairs, so Mir was allowed to reenter the Earth’s atmosphere and burn up in 2001. “Mir” is a Russian word meaning “peace” or “world”.

57. Links org. : PGA
The Professional Golfers’ Association (PGA) was founded in 1916 and today has its headquarters (unsurprisingly) in Florida, where so many golfers live. Back in 1916, the PGA was based in New York City.

65. “Lucky Jim” author Kingsley : AMIS
Kingsley Amis (what a great name!) was a very successful English writer, famous for producing entertaining, comedic novels. His most famous novel probably is his first, “Lucky Jim” published in 1954, although he won a Booker Prize for a later novel, “The Old Devils” published in 1986. He passed on some of his talent through his genes, it seems, as his son Martin Amis is a very successful novelist too.

67. Went kaput : DIED
“Kaput” is a familiar term meaning “incapacitated, destroyed”, and comes to us from French (via German). The original word “capot” means “not having won a single trick” in the French card game called Piquet.

Down
2. “South Pacific” show tune : BALI HA’I
The song “Bali Ha’i” is from the musical “South Pacific” by Rodgers and Hammerstein. In the musical, Bali Ha’i is the name of a volcanic island that neighbors the island on which the story takes place.

4. “___ the season …” : ‘TIS
The music for the Christmas song “Deck the Halls” is a traditional Welsh tune that dates back to the 16th century. The same tune was used by Mozart for a violin and piano duet. The lyrics with which we are familiar (other than the “f-la-la”) are American in origin, and were recorded in 19th century.

11. Ljubljana resident : SLOVENE
Ljubljana is the capital of Slovenia, a status the city was awarded on the creation of the Republic in 1991 following the breakup of Yugoslavia.

12. Used a stun gun on : TASERED
Victor Appleton wrote a novel for young adults called “Tom Swift and His Electric Rifle”. The company that developed the TASER electroshock weapon partly named its product as a homage to the novel. The acronym “TASER” stands for “Thomas A. Swift’s Electric Rifle”.

14. Poet/illustrator Silverstein : SHEL
Author Shel Silverstein had a varied career and did a lot more than write books. Silverstein was a poet, composer, cartoonist and screenwriter among other things. One of his successful children’s books is “The Giving Tree”, which was first published in 1964. “The Giving Tree” tells of a young boy who has a special relationship with a tree in a forest. The message of the book seems to be that the tree provides the little boy with everything he needs.

18. God of love : AMOR
Cupid was the god of love in Roman mythology. Cupid’s name comes from the Latin verb “cupere” meaning “to desire”. Cupid’s Latin name was Amor, and his Greek counterpart was Eros.

22. Joel Coen’s filmmaking brother : ETHAN
I think it’s great to see two brothers working together and being so successful. Joel and Ethan Coen are two movie producers and directors who both live in New York City. The Coen brothers do love the movie-making business and they even married industry “insiders”. Ethan’s wife is film editor Tricia Cooke, and Joel is married to one of my favorite actresses, the lovely Frances McDormand.

25. Coquette : MINX
A minx is a flirtatious woman. The term derives from the 16th-century word “mynx” used for a pet dog.

A “coquet” is a male flirt, with “coquette” being a female flirt. The word comes from French, and is the diminutive of “coq”, the word for a cock.

27. Killer whales : ORCAS
The taxonomic name for the killer whale is Orcinus orca. The use of the name “orca”, rather than “killer whale”, is becoming more and more common. The Latin word “Orcinus” means “belonging to Orcus”, with Orcus being the name for the Kingdom of the Dead.

34. Partner of Snap and Crackle : POP
Snap, Crackle and Pop are three elves employed as the mascots for Kellogg’s Rice Krispies. The trio first appeared in an ad campaign in 1933, although the phrase “snap, crackle and pop” had been used for the cereal for some time in radio ads. By the way, the elves are selling “Rice Bubbles” in Australia, and the elves have different names in other parts of the world (like “Cric!, Crac! and Croc! in Quebec).

40. Pete with seven Wimbledon championships : SAMPRAS
Pete Sampras is a retired Greek-American tennis professional. Sampras was rated number one in the world rankings for six years in a row in the nineties.

41. Paper-folding craft : ORIGAMI
Origami is the traditional Japanese art form of paper folding. The best-known example of the craft is the paper crane. The word “origami” is derived from “ori“ (folding) and “kami” (paper).

49. Disputed island in the China Sea : TAIWAN
Prior to 1945, the island that we know today as Taiwan was called “Formosa”, the Portuguese word for “beautiful”. Portuguese sailors gave the island this name when they spotted it in 1544. The official name for the state of Taiwan is the “Republic of China”.

51. Incessantly complain : CARP
The word “carp” used to mean simply “talk” back in the 13th century, with its roots in the Old Norwegian “karpa” meaning “to brag”. A century later the Latin word “carpere” meaning “to slander” influenced the use of “carp” so that it came to mean “find fault with”.

63. Inc., in England : LTD
In Britain and Ireland the most common type of business (my perception anyway) is one that has private shareholders whose liability is limited to the value of their investment. Such a company is known as a private limited company, and has the letters “Ltd” after the name. If the shares are publicly traded, then the company is a public limited company, and has the letters “plc” after the name.