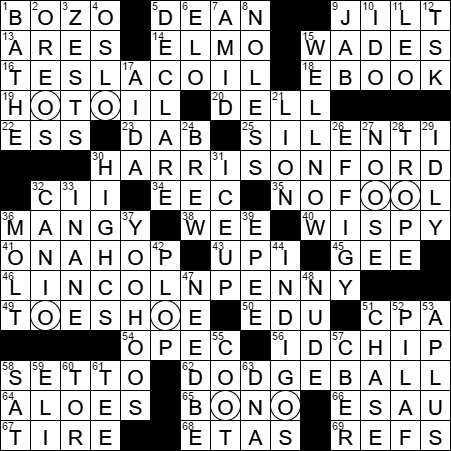 CROSSWORD CONSTRUCTOR: Paul Coulter
THEME: Tires
Today’s grid includes several circled letters O that represent TIRES. Each pair of TIRES sits under the name of a car that forms part of the answer above:

67A. Bad thing to blow … or what each of the circled letters in this puzzle represents : TIRE

Today’s Wiki-est, Amazonian Googlies
Across
5. Campus bigwig : DEAN
A “bigwig” is someone important. The use of the term harks back to the days when men of authority and rank wore … big wigs.

9. Leave standing at the altar : JILT
To jilt someone with whom you have a relationship is to drop them suddenly or callously. “Jilt” is an obsolete noun that used to mean “harlot” or “loose woman”.

13. Greek counterpart to Mars : ARES
The Greek god Ares is often referred to as the Olympian god of warfare, but originally he was regarded as the god of bloodlust and slaughter. Ares united with Aphrodite to create several gods, including Phobos (Fear), Deimos (Terror) and Eros (Desire). Ares was the son of Zeus and Hera, and the Roman equivalent to Ares was Mars.

14. “Tickle Me” doll : ELMO
The toy called Tickle Me Elmo was a sensational fad in the late nineties, with stores raising prices dramatically above the recommended retail price to take advantage of demand. Reportedly, prices as high as $1500 were paid at the height of the craze. The toy’s manufacturer, Tyco, originally planned to market the “tickle” toy as Tickle Me Tasmanian Devil (after the “Looney Tunes” character), but then went with “Elmo” after they bought the rights to use “Sesame Street” names.

16. Early radio transmitter : TESLA COIL (“Tesla” over two “tires”)
A Tesla coil is used to create the high voltages needed to ionize air in those pyrotechnic shows where sparks jump from globe to globe. The same technology was used up to the twenties in spark-gap radio transmitters which were central to wireless telegraphy back then.

18. Download for a Kindle : E-BOOK
Amazon’s Kindle line of e-book readers was introduced in 2007. The name “kindle” was chosen to evoke images of “lighting a fire” through reading and intellectual stimulation. I bought myself a Kindle Fire HD not that long ago. I’ve started reading e-books for the first time in my life, as well as enjoying other computing options available with the tablet device. I love it …

25. Part of “business,” phonetically : SILENT I
The letter I in the word “business” is silent.

30. “Raiders of the Lost Ark” star : HARRISON FORD (“Ford” over two “tires”)
“Raiders of the Lost Ark” is, in my humble opinion, the best of the Indiana Jones franchise of movies. This first Indiana Jones film was released in 1981, produced by George Lucas and directed by Steven Spielberg. Harrison Ford was Spielberg’s first choice to play the lead, but Lucas resisted as he was concerned that he would be too closely associated with the actor (as Ford played Han Solo in “Star Wars”, and also appeared in Lucas’s “American Graffiti”). Tom Selleck was offered the role but he couldn’t get out of his commitments to “Magnum, P.I.” Eventually Spielberg got his way and Ford was hired, a good thing I say …

34. Common Market letters : EEC
The European Economic Community (EEC) was also called “the Common Market”. The EEC was a NAFTA-like structure that was eventually absorbed into today’s European Union (EU).

36. Like a sorry-looking dog : MANGY
Mange is a skin disorder in animals caused by parasitic mites that embed themselves in the skin, perhaps living in hair follicles. The same disorder in humans is called scabies.

41. How some ground balls are fielded : ON A HOP
That would be baseball.

43. Longtime news inits. : UPI
Founded in 1958, United Press International (UPI) used to be one of the biggest news agencies in the world, sending out news by wire to the major newspapers. UPI ran into trouble with the change in media formats at the end of the twentieth century and lost many of its clients as the afternoon newspapers shut down due to the advent of television news. UPI, which once employed thousands, still exists today but with just a handful of employees.

46. One-cent coin since 1909 : LINCOLN PENNY (“Lincoln” over two “tires”)
The US one-cent coin has borne the profile of President Abraham Lincoln since 1909, the centennial of Lincoln’s birth. Fifty years later, a representation of the Lincoln Memorial was added to the reverse side.

50. Email address ending for a student : EDU
The .org domain was one of the six original generic top-level domains specified. The complete original list is:

54. Oil cartel : OPEC
The OPEC cartel (the Organization of the Petroleum Exporting Countries) was formally established in 1960 and has been headquartered in Vienna since 1965. The US is actually the third largest oil producer in the world (after Russia and Saudi Arabia). One reason America isn’t in OPEC, even though we are a big producer, is that we import a lot more than we export. But we all probably knew that already …

A cartel is a group of independent businesses who cooperate to regulate production, pricing and marketing of their common product(s).

62. Common game in a school gym : DODGEBALL (“Dodge” over two “tires”)
The Dodge brand of automobile started life as the Dodge Brothers Company in 1900. The Dodge Brothers first made parts for the auto industry, and turned to making their own cars in 1915.

65. U2’s lead singer : BONO
Irish singer Bono is a Dubliner who was born Paul David Hewson. As a youth, Hewson was given the nickname “Bono Vox” by a friend, a Latin expression meaning “good voice”, and so the singer has been known as Bono since the late seventies. His band’s first name was “Feedback”, later changed to “The Hype”. The band members searched for yet another name and chose U2 from a list of six names suggested by a friend. They picked U2 because it was the name they disliked least …

66. Biblical brother with a birthright : ESAU
Esau was the twin brother of Jacob, the founder of the Israelites. When their mother Rebekah gave birth to the twins “the first emerged red and hairy all over (Esau), with his heel grasped by the hand of the second to come out (Jacob)”. As Esau was the first born, he was entitled to inherit his father’s wealth (it was his “birthright”). Instead, Esau sold his birthright to Jacob for the price of a “mess of pottage” (a meal of lentils).

68. Greek H’s : ETAS
Eta is the seventh letter of the Greek alphabet, and is a forerunner of our Latin character “H”. Originally denoting a consonant, eta was used as a long vowel in Ancient Greek.

69. Some whistle blowers : REFS
Back in the early 17th century, a “referee” was someone who examined patent applications. We started using the same term for a person presiding over a sporting event in the 1820s. “Referee” is derivative of the verb “to refer”, and literally describes someone who has the authority to make a decision by “referring to” a book, archive etc.

Down
2. Stackable cookies : OREOS
How the Oreo cookie came to get its name seems to have been lost in the mists of time. One theory is that it comes from the French “or” meaning “gold”, a reference to the gold color of the original packing. Another suggestion is that the name is the Greek word “oreo” meaning “beautiful, nice, well-done”.

4. Norway’s capital : OSLO
The Norwegian capital of Oslo is located at the northern end of a fjord known as Oslofjord. The fjord is home to 40 islands that lie within the city’s limits. Oslo also has 343 lakes.

6. “Xanadu” band, for short : ELO
The title song of the 1980 movie “Xanadu” was performed by the Electric Light Orchestra (ELO) and Olivia Newton-John (who starred in the film). Despite the popularity of ELO around the world, the song “Xanadu” was the band’s only number one hit back in their homeland of the UK.

11. Sign between Cancer and Virgo : LEO
Leo is the fifth astrological sign of the Zodiac. People born from July 23 to August 22 are Leos.

17. Elton John/Tim Rice Broadway musical : AIDA
The rock musical “Aida” is based on Giuseppe Verdi’s original opera. It premiered in 1998 and is still performed today. Music is by Elton John and lyrics are by Tim Rice.

32. Tragic clown in “Pagliacci” : CANIO
Canio is the character in Leoncavallo’s opera “Pagliacci” who famously is dressed as a clown.

“Pagliacci” (“The Clowns” in English) is an opera by Ruggero Leoncavallo, first performed in 1892 in Milan. Included in the opera is one of the most famous arias of all time, “Vesti la giubba” (“put on the costume”).

39. Blade in a sporting match : EPEE
The French word for sword is “épée”. In competitive fencing the épée is connected to a system that records an electrical signal when legal contact is made on an opponent’s body.

42. Alka-Seltzer sound : PLOP
Alka-Seltzer is a brand of fizzy antacid that has been marketed since 1931. In terms of ingredients, it is a mix of sodium bicarbonate, aspirin and anhydrous citric acid.

44. Blue hues : INDIGOS
The name of the color “indigo” ultimately comes from the Greek “indikon” meaning “blue dye from India”.

52. Rice dish : PILAF
“Pilaf” is a Persian word, and we use it to describe rice that is browned in oil and then cooked in a seasoned broth.

55. Geezer : COOT
Geezer, codger and coot are all not-so-nice terms for an old man.

57. Trucker on a radio : CBER
A CBer is someone who operates a citizens’ band (CB) radio. In 1945, the FCC set aside certain radio frequencies for the personal use of citizens. The use of the Citizens’ Band increased throughout the seventies as advances in electronics brought down the size of transceivers and their cost. There aren’t many CB radios sold these days though, as they have largely been replaced by cell phones.

59. Inventor Whitney : ELI
The inventor Eli Whitney is a best known for inventing the cotton gin. Whitney also came up with the important concept of “interchangeable parts”. Parts that are interchangeable can be swapped out of equipment or perhaps used in related designs.

63. Paternity identifier : DNA
I’ve always been fascinated by the fact that the DNA of living things is so very similar across different species. Human DNA is almost exactly the same for every individual (to the degree of 99.9%). However, those small differences are sufficient to distinguish one individual from another, and to determine whether or not individuals are close family relatives.