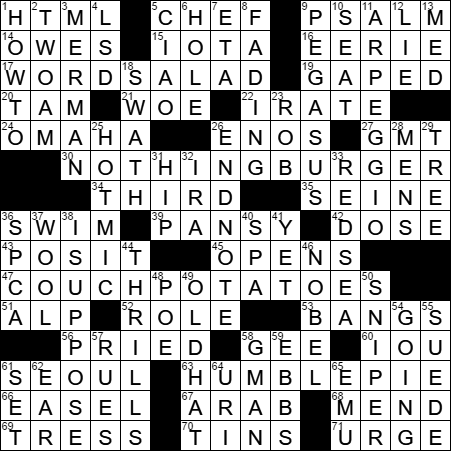 CROSSWORD CONSTRUCTOR: Gary Cee
THEME: Food!
Each of today’s themed items ends with a food item served at a meal:

17A. Gobbledygook : WORD SALAD
30A. Big fat zero : NOTHING BURGER
47A. Habitual tube watchers : COUCH POTATOES
63A. What a shamed person has to “eat” : HUMBLE PIE

Today’s Wiki-est, Amazonian Googlies
Across
1. Web designer’s code : HTML
HTML is HyperText Markup Language, the language used to write most Internet web pages (including this one).

9. One includes “My cup runneth over” in the Bible : PSALM
The Greek word “psalmoi” originally meant “songs sung to a harp”, and gave us the word “psalms”. In the Jewish and Western Christian traditions, the Book of Psalms contains 150 individual psalms, divided into five sections.

15. Slight amount : IOTA
Iota is the ninth letter in the Greek alphabet. We use the word “iota” to portray something very small as it is the smallest of all Greek letters.

17. Gobbledygook : WORD SALAD
“Gobbledygook” is pompous, officious talk. The term is the 1944 invention of US Congressman Maury Maverick from Texas. He said he wanted to come up with a word that was imitative of a turkey.

20. Scot’s cap : TAM
A tam o’shanter is a man’s cap traditionally worn by Scotsmen. “Tams” were originally all blue (and called “blue bonnets”) but as more dyes became readily available they became more colorful. The name of the cap comes from the title character of the Robert Burns poem “Tam O’Shanter”.

24. Nebraska’s capital before Lincoln : OMAHA
Omaha is the largest city in the state of Nebraska. It is located on the Missouri River, about 10 miles north of the mouth of the Platte River When Nebraska was still a territory Omaha was its capital, but when Nebraska achieved statehood the capital was moved to the city of Lincoln.

26. Grandson of Adam : ENOS
Enos was the son of Seth, and therefore the grandson of Adam and Eve. According to the ancient Jewish work called the Book of Jubilees, Enos married his own sister Noam.

27. Clock-setting std. : GMT
Greenwich Mean Time (GMT) is the time at the Prime Meridian, the meridian that runs through Greenwich in London.

34. Like Jefferson on a list of presidents : THIRD
Thomas Jefferson was the US’s first Secretary of State (under George Washington), the US’s second Vice President (under John Adams), and the US’s third president. Jefferson is a personal hero of mine, I must admit. Anyone interested in biographies of US presidents might like to read Jon Meacham’s “Thomas Jefferson: The Art of Power”. I highly recommend it …

35. River through Paris : SEINE
The Seine is the river that flows through Paris. The Seine empties into the English Channel to the north, at the port city of Le Havre.

39. Flower that’s also a girl’s name : PANSY
The garden flower called the pansy takes its name from the French word “pensée” meaning “thought”. This name was chosen as the flower was often used as a symbol of remembrance.

53. Hair that hangs over the forehead : BANGS
“Bangs” is another word that caught me out when I arrived in the US. “Bangs” back in Ireland are called “a fringe”. Apparently the US term is derived from the hair on horses somehow.

61. Capital of South Korea : SEOUL
Seoul is the capital city of South Korea. The Seoul National Capital Area is home to over 25 million people and is the second largest metropolitan area in the world, second only to Tokyo, Japan.

66. Stand on three legs? : EASEL
The word “easel” comes from an old Dutch word meaning “donkey” would you believe? The idea is that an easel carries its load (an oil painting, say) just as a donkey would be made to carry a load.

Down
3. Ethel who sang “There’s No Business Like Show Business” : MERMAN
Ethel Merman was an actress and singer, one noted for having a very powerful voice. Merman was married and divorced four times, the last time to the actor Ernest Borgnine, albeit for only 32 days in 1964.

“Annie Get Your Gun” is an Irving Berlin musical, first performed on Broadway in 1946. The show is a fictionalized account of the life of sharpshooter Annie Oakley. It was written as a vehicle for Ethel Merman, and when she sang the hit tune “There’s No Business Like Show Business”, she apparently brought down the house.

4. It was often dropped in the ’60s : LSD
LSD (known colloquially as “acid”) is short for lysergic acid diethylamide. A Swiss chemist called Albert Hofmann first synthesized LSD in 1938 in a research project looking for medically efficacious ergot alkaloids. It wasn’t until some five years later when Hofmann ingested some of the drug accidentally that its psychedelic properties were discovered. Trippy, man …

6. Woodchuck’s escape route : HOLE
The woodchuck is also known as the groundhog, and is one in a group of large ground squirrels called marmots. Repeat after me:

9. Flying horse of Greek myth : PEGASUS
Pegasus is a white, winged stallion of Greek mythology. Pegasus was sired by Poseidon and foaled by Medusa.

11. Notes of a chord played in rapid succession : ARPEGGIO
An arpeggio is a technique in which the notes of a chord are played in sequence, one after the other. “Arpeggio” can be translated from Italian as “broken chord”

13. Club ___ : MED
Club Méditerranée is usually referred to as “Club Med”. It is a French company that started in 1950 with a resort on the Spanish island of Mallorca in the Mediterranean. It was originally a “club” with annual membership dues. Now it is an operator of numerous all-inclusive resorts located all over the world.

33. Body of water that separates Africa and Asia : RED SEA
The Red Sea (sometimes called the Arabian Gulf) is a stretch of water lying between Africa and Asia. The Gulf of Suez (and the Suez Canal) lies to north, and the Gulf of Aden to the south. According to the Book of Exodus in the Bible, God parted the Red Sea to allow Moses lead the Israelites from Egypt.

36. Pet safety org. : SPCA
Unlike in most developed countries, there is no “umbrella” organization in the US with the goal of preventing cruelty to animals. Instead there are independent organizations set up all over the nation using the name SPCA. Having said that, there is an organization called the American Society for the Prevention of Cruelty to Animals (ASPCA) that was originally intended to operate across the country, but really it now focuses its efforts in New York City.

46. 2016 prize for Bob Dylan : NOBEL
The real name of singer Bob Dylan is Robert Zimmerman. Zimmerman chose that particular stage name because he was greatly influenced by the poetry of the Welsh poet, Dylan Thomas.

48. Who wrote of “sorrow for the lost Lenore” : POE
“The Raven” is a narrative poem by Edgar Allan Poe that tells of a student who has lost the love of his life, Lenore. A raven enters the student’s bedchamber and perches on a bust of Pallas. The raven can talk, to the student’s surprise, but says nothing but the word “nevermore” (“quoth the raven, ‘Nevermore’”). As the student questions all aspects of his life, the raven taunts him with the same comment, “nevermore”. Finally the student decides that his soul is trapped beneath the raven’s shadow and shall be lifted “nevermore” …

49. Out-of-date : OLD HAT
The use of “old hat” to mean something “out of date, stale” started about 1911. Before that, the term “old hat” meant something very different, and very vulgar. “Old hat” was the name given to a very private part of the female anatomy, the idea being that it was “often felt” (as in a “felt hat”). I just don’t know what to say …

55. Napped leather : SUEDE
Suede is leather made from the underside of the skin, mainly from a lamb. As such it is very soft, although not as durable as leather made from the exterior skin. The soft leather was, and is still used for making gloves. Back in 1859 these gloves were called “gants de Suede” in France, or “gloves of Sweden”. So, the name “suede” comes from the French word for Sweden.

58. F.B.I. worker, informally : G-MAN
The nickname “G-men” is short for “Government Men” and refers to agents of the Federal Bureau of Investigation.

64. Celebrity psychic Geller : URI
Uri Geller’s most famous performance is perhaps his uncomfortable failure on “The Tonight Show” with Johnny Carson in 1973. Carson “hijacked” Geller on live television by providing him with spoons to bend and watches to start, none of which had been available to Geller before the show aired. Clever!