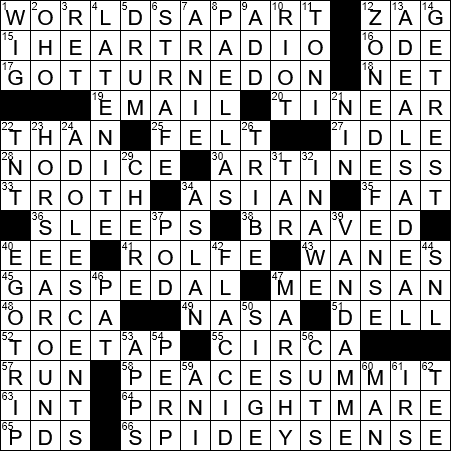 15. Alternative to Pandora or Spotify : IHEARTRADIO

Felt is used for the playing surface of a pool table.

There’s a phrase used in some traditional wedding vows that goes “… and thereto I plight thee my troth”. “I plight” is an obsolete way of saying “I pledge”. “Troth” is an old variant of the word truth, and meant “truth” but also “loyalty”. So, “I plight thee my troth” means, “I promise to be loyal to you”. I am sure all of us who uttered those words knew what we were saying …

An oxford is a type of lace-up shoe that originated not in Oxford, but actually in Scotland and/or Ireland.

Dell, the computer manufacturer, is named after the company’s founder Michael Dell. Michael Dell started his company in his dorm room at college, shipping personal computers that were customized to the specific needs of his customers. He dropped out of school in order to focus on his growing business, a decision that I doubt he regrets. Michael Dell is now one of the richest people in the world.

President Bill Clinton hosted Israeli Prime Minister Ehud Barak and Palestinian Authority Chairman Yasser Arafat at Camp David in 2000. The intent was to progress towards resolution of the conflict in the Middle East, but there was no agreement.

66. Intuition about something soon to happen : SPIDEY SENSE

“Spidey sense” is a phrase used to describe one’s intuition or instinct, especially when sensing something that might be dangerous. The term arises from the comic book hero Spider-Man’s ability to sense danger before others.

6. Fire on from above : STRAFE

We’ve been using “strafe” to mean an attack on a ground position from low-flying aircraft since WWII. Prior to that, the word was used by British soldiers to mean any form of attack. It was picked up from the German word for “punish” as it was used in “Gott strafe England” meaning, “May God punish England”.

The body-builder, actor and politician Arnold Schwarzenegger was born in Graz in Austria, the son of the local police chief. Schwarzenegger’s family name translates into the more prosaic “black plough man”. In his bodybuilding days, he was often referred to as the Austrian Oak. When he was Governor of California he was called “the Governator”, a play on his role in the “The Terminator” series of movies.

Toni Collette is a marvelous actress from Australia who really started to garner the public’s attention playing the title role in the 1994 film “Muriel’s Wedding”. She went on to take major roles in films like “Emma” (1996), “The Sixth Sense” (1999), “About a Boy” (2002), all of which are favorites of mine. Collette also played the lead in the excellent Showtime comedy-drama “United States of Tara”.

“United States of Tara” is a comedy-drama that aired for a couple of years on Showtime. Star of the show is the talented Australian actress Toni Collette. The character she plays is Tara, a woman suffering from multiple personality disorder.

“Cher” is the French for “dear”. The spelling is “chère” when used with a feminine noun.

Billet-doux is a French term for a love letter. A “billet” is a short note, and “doux” means sweet.

Jean-Claude Van Damme is a Belgian actor and expert in martial arts. Given his background, he is referred to by the nickname “The Muscles from Brussels”.

44. Its artists do many sketches, for short : SNL

50. Counterpart of a blitz : SIEGE

Pandora is a clever music-streaming site that runs what’s called the Music Genome Project. The idea behind the project is that particular pieces of music can be classified by specific characteristics (genes). The assumption is that given a person’s liking for the genome of a particular song, then a recommendation of another song with a similar genome will also be enjoyed by that person. I’ve used Pandora quite a lot, and it seems to work!

15. Alternative to Pandora or Spotify : IHEARTRADIO

17. Became excited : GOT TURNED ON

45. One getting depressed on the road : GAS PEDAL

66. Intuition about something soon to happen : SPIDEY SENSE

6. Fire on from above : STRAFE

44. Its artists do many sketches, for short : SNL

50. Counterpart of a blitz : SIEGE