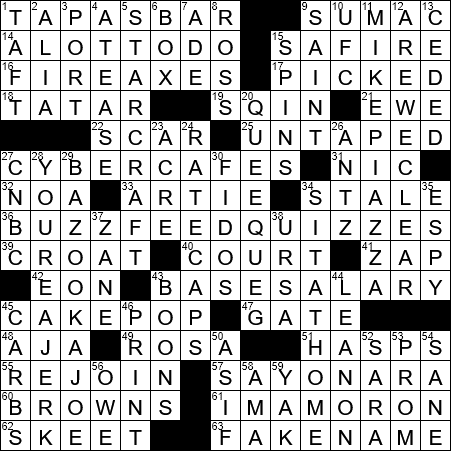 Sumacs are a group of flowering shrubs and small trees that includes poison oak, poison ivy and poison sumac (nasty stuff!). The leaves of some species of sumac contain tannins that are used for tanning leather. Morocco leather is an example of the use of sumac tannins.

William Safire was a syndicated columnist for the New York Times. He also worked for the Nixon election campaigns in 1960 and 1968, and was a speechwriter for both Richard Nixon and Spiro Agnew.

Tatars are an ethnic group of people, mainly residing in Russia (a population of about 5 1/2 million). One of the more famous people with a Tatar heritage was Hollywood actor Charles Bronson. Bronson’s real name was Charles Buchinsky.

The actor Nicolas “Nic” Cage was born Nicolas Coppola. Cage is the nephew of director Francis Ford Coppola and actress Talia Shire, both of whom are his father’s siblings.

Artie Abrams is a character in the Fox television show “Glee”. Abrams is played by the young actor Kevin McHale, and is the character who gets around in a wheelchair.

36. Things like “Which Disney Princess Are You?” : BUZZFEED QUIZZES

BuzzFeed is an Internet media company that was founded in 2006 in New York City.

Steely Dan’s heyday was in the seventies when they toured for a couple of years, although the group mainly focused on studio work. The band was formed in 1972 and broke up in 1981. The core of the band reunited in 1993, and is still performing today despite the passing of founding member Walter Becker in 2017. Steely Dan’s best-selling album is “Aja” (pronounced “Asia”), which was released in 1977.

8. Who set the standard for the United States? : ROSS

Legend has it that Betsy Ross made the first American flag for General George Washington. However, this story only surfaced during the centennial celebrations of 1876, and although Betsy Ross was indeed one of several flag makers in Philadelphia in the days of George Washington, sadly there’s no definitive evidence that Ross provided that first stars and stripes.

The Ultimate Fighting Championship (UFC) is a largest promoter in the world of mixed martial arts competitions. I think the idea is that competitors fight each other in various disciplines to see who is the “best of the best” …

Queequeg is a character in Herman Melville’s classic tale “Moby Dick”. Queequeg is the chief harpooner on the boat. He is the son of South Sea chieftain, and is also a cannibal who is covered in tattoos.

23. Israeli city that shares its name with a unit of measure : ACRE

Acre is a port city in northern Israel, on Haifa Bay.

“Closing Bell” is a business show on CNBC that airs each weekday. As the title suggests, the show covers the period just before the end of trading (the “closing bell”) and reviews that that day on the floor after the market has closed.

Billy Zane is an actor from Chicago, Illinois. One of Zane’s most prominent roles was the title character in the 1996 superhero film called “The Phantom”. He also played the somewhat creepy bad guy in the 1989 thriller movie called “Dead Calm”.

45. What whole-grain foods and sugary drinks have lots of : CARBS

54. Not a candidate for the invoking of the 25th Amendment, say : SANE

The Twenty-fifth Amendment to the US Constitution defines procedures adopted in the event of a vacancy in the office of the US President or Vice President. Adopted in 1967, the amendment also addresses situations in which the president becomes incapacitated.

22. Bare place on the side of a mountain : SCAR

27. Places to get wired, in two senses of the word : CYBERCAFES

36. Things like “Which Disney Princess Are You?” : BUZZFEED QUIZZES

43. Amount before bonuses : BASE SALARY

8. Who set the standard for the United States? : ROSS

15. Does some postdebate political commentary : SPINS

23. Israeli city that shares its name with a unit of measure : ACRE

45. What whole-grain foods and sugary drinks have lots of : CARBS

54. Not a candidate for the invoking of the 25th Amendment, say : SANE