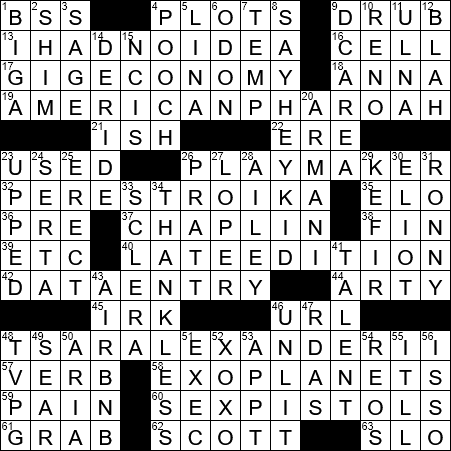 Musicians use “gig” to describe a job, a performance. The term originated in the early 1900s in the world of jazz. The term “gig economy” applies to a relatively recent phenomenon where workers find themselves jumping from temporary job to temporary job, from gig to gig.

American Pharoah was the twelfth winner of the Triple Crown, achieving the feat in 2015. The horse’s name was inspired by that of his parents: Pioneerof the Nile (dam) and Yankee Gentleman (sire). And, as some kind blog readers have pointed out, there are a some unexpected spellings in the names of horses. One might expect “American Pharoah” to be spelled “American Pharaoh”, and indeed “Pioneerof the Nile” to be written as “Pioneer of the Nile”. More challenges for us crossworders …

37. Who said “All I need to make a comedy is a park, a policeman and a pretty girl” : CHAPLIN

Tsar Alexander II ruled the Russian Empire from 1855, but he lived in dangerous times. There was an attempt on his life in St. Petersburg in 1866, and then another in 1879. Later in 1879 someone exploded a bomb intended for the tsar’s train, but missed. In 1880 another explosion, this time in a Winter Palace dining room, killed eleven people but missed Alexander. Finally, in 1881 after a bomb exploded under the tsar’s bulletproof carriage, he emerged unharmed but then a second bomb was thrown and exploded at Alexander’s feet, killing him instantly.

An exoplanet is simply a planet that exists outside of our own solar system. Astronomers have detected thousands of exoplanets, most of which are quite large (the size of Jupiter), no doubt because bigger planets are easier to find.

One of the claims to fame of the Scott Paper Company is that it was the first to sell toilet paper on a roll.

The Aqueduct Racetrack in Queens, New York is known by many as the Big A. The track opened in 1894 and was located near an aqueduct belonging to the Brooklyn Water Works, which gave the name.

5. Chinese tennis star who has won both the French and Australian Opens : LI NA

Li Na is a retired tennis professional from China who was ranked world no. 2 on the circuit in 2014.

“Pronation” is the medical term for rotation of the forearm.

NCIS is the Naval Criminal Investigative Service, which investigates crimes in the U.S. Navy and Marine Corps. The service gives its name to the CBS TV show “NCIS”, a spin-off drama from “JAG” in which the main “NCIS” characters were first introduced. The big star in “NCIS” is the actor Mark Harmon. “NCIS” is now a franchise, with spinoff shows “NCIS: Los Angeles” and “NCIS: New Orleans”.

24. Maker of the iComfort line : SERTA

The Pratt Institute is an art college in Brooklyn, New York. The school started out as an engineering college in 1887, founded by oil industry pioneer Charles Pratt. However, the engineering program was dropped in 1993 due to small enrollment numbers.

Alvin Ailey was a dancer who formed his own group in New York in 1958, the Alvin Ailey American Dance Theater. The most famous work that Ailey choreographed was called “Revelations”. President Barack Obama awarded Ailey the Presidential Medal of Freedom, posthumously in 2014.

“Burnt Norton” is the first of the series of poem that T. S. Eliot dubbed “Four Quartets”.

Ronny Chieng a comedian and actor from Malaysia who is perhaps best known in the US for his appearances on “The Daily Show” on Comedy Central.

The sclera is the white part of the eye. Usually the sclera is white, but in horses for example, it is black. Really, go check!

A cantatrice is a female professional singer, especially one who sings opera.

37. Who said “All I need to make a comedy is a park, a policeman and a pretty girl” : CHAPLIN

57. What fish or chicken can be, but not turkey : VERB

5. Chinese tennis star who has won both the French and Australian Opens : LI NA

24. Maker of the iComfort line : SERTA