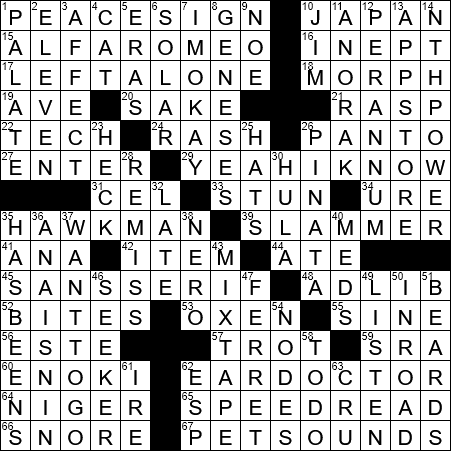 The “Alfa” in Alfa Romeo is actually an acronym, standing for Anonima Lombarda Fabbrica Automobili (“Lombard Automobile Factory, Public Company”). ALFA was an enterprise founded in 1909 and which was taken over by Nicola Romeo in 1915. In 1920 the company name was changed to Alfa Romeo.

The Spider is a roadster that was manufactured by the Italian auto company, Alfa Romeo. It was in production from 1966 to 1993, and is considered a design classic.

“Ave” is a Latin word meaning “hail” as in “Ave Maria”, which translates as “Hail Mary”. “Ave” can also be used to mean “goodbye”.

I find this clue to be a bit confusing. It is indeed true that British people often shorten the word “pantomime” to “panto”. It’s also true that the term “pantomime” is used outside of the Britain to describe a mime performance. The confusing truth is that “pantomime” and “panto” in Britain describe a form of musical entertainment that is far from silent.

“Ad libitum” is a Latin phrase meaning “at one’s pleasure”. In common usage the phrase is usually shortened to “ad lib”. On the stage the concept of an “ad lib” is very familiar.

Queen Isabella I of Castile was recognized as a formidable sovereign, and was perceived as a joint ruler with her husband, King Ferdinand II of Aragon. The pair united their two kingdoms in a move that heralded the unification of Spain.

Udon noodles are made from wheat-flour and are very popular in Japanese cuisine like tempura.

The eardrum lies at the intersection of the outer ear and middle ear. Also called the tympanic membrane, the eardrum picks up vibrations in air caused by sound waves, and transmits these vibrations to the three tiny bones called the ossicles. These ossicles (hammer, anvil and stirrup) are in the middle ear, and transmit the vibration to the oval window. The oval window is the membrane-covered opening lying at the intersection of the middle ear and the inner ear. The vibrations are transmitted into fluid in the inner ear, and converted into nerve impulses in the cochlea that are transmitted to the brain.

The principal river in western Africa is the Niger, which runs 2,600 miles through the continent. The river has a boomerang shape, taking a sharp turn around the the ancient city of Timbuktu in Mali.

2. Number of sides on a loonie : ELEVEN

There are eight tokens included in the game of Monopoly as of 2013. These are the wheelbarrow, battleship, race car, thimble, boot, Scottie dog, top hat and cat. The latest to be introduced was the cat in 2013, replacing the iron. The battleship and the cannon (aka howitzer, now retired) had been added to the Monopoly game as part of a recycling exercise. The pieces were intended for the game “Conflict” released in 1940, but when Parker Bros. pulled “Conflict” off the market due to poor sales, they added their excess battleships and cannons to Monopoly.

Noe Valley is a neighborhood in San Francisco. The area is named after José de Jesús Noé who was the last Mexican mayor of Yerba Buena, which is what San Francisco was called when it was part of Mexico.

Our word “gymnasium” comes from the Greek “gymnasion” meaning “public place where exercise is taken”. The Greek term comes from “gymnos” meaning “naked”, as that physical training was usually done unclothed.

Anoraks aren’t very popular over here in America. Everyone has one in Ireland! An anorak is a heavy jacket with a hood, often lined with fur (or fake fur), and is an invention of the Inuit people.

The Latin word for year is “annus”. We often see it used in Latin phrases, but usually with a different spelling. For example in “anno Domini”, the “anno” is the ablative case of “annus” as the phrase means “in the year of the Lord”. Another example is “per annum”, in which “annum” is the accusative case as the literal translation of the phrase is “during the year”.

Anaïs Nin was a French author who was famous for her journals that she wrote for over sixty years from the age of 11 right up to her death. Nin also wrote highly regarded erotica and cited D. H. Lawrence as someone from whom she drew inspiration. Nin was married to banker and artist Hugh Parker Guiler in 1923. Decades later in 1955, Nin married former actor Rupert Pole, even though she was still married to Guiler. Nin and Pole had their marriage annulled in 1966, but just for legal reasons, and they continued to live together as husband and wife until Nin passed away in 1977.

Eric Bana is an Australian actor who enjoyed a successful career in his home country before breaking into Hollywood playing an American Delta Force sergeant in “Black Hawk Down”. A couple of years later he played the lead in Ang Lee’s 2003 movie “Hulk”, the role of Dr Bruce Banner. More recently he played the Romulan villain Nero, in the 2009 “Star Trek” movie.

43. Collection of favorites, of a sort : MIXTAPE

Even though “tapes” are no longer used, the term “mixtape” still describes any homemade collection of musical tracks. The less retro term for the same thing might be “playlist”.

In French, one might see the word “cru” on “une bouteille de vin” (a bottle of wine).

“Cru” is a term used in the French wine industry that means “growth place”. So, “cru” is the name of the location where the grapes are grown, as opposed to the name of a specific vineyard. The terms “premier cru” and “grand cru” are also used, but the usage depends on the specific wine region. Generally it is a classification awarded to specific vineyards denoting their potential for producing great wines. “Grand cru” is reserved for the very best vineyards, with “premier cru” the level just below

65. Get through lines quickly : SPEED-READ

2. Number of sides on a loonie : ELEVEN

3. Make a difference to : AFFECT

43. Collection of favorites, of a sort : MIXTAPE