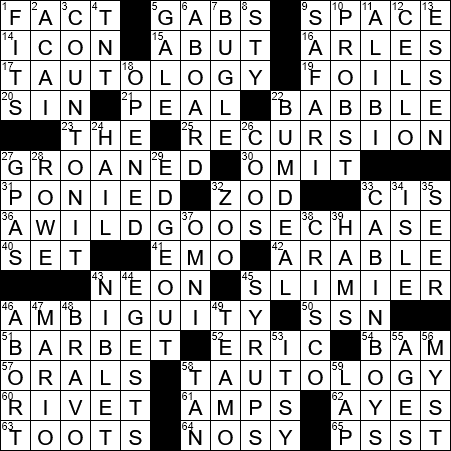 In today’s puzzles we clues referring to clues, in a very clever way:

“Tautology” is one of my favorite words. It describes needless repetition, the redundant use words to convey the same message perhaps in the same sentence.

When something refers to itself, it is said to be recursive, self-referential.

“To pony up” means “to pay”. Apparently the term originated as slang use of the Latin term “legem pone” that was once used for “money”. “Legem Pone” was the title of the Psalm that was read out on March 25 each year, and March 25 was the first payday of the year in days gone by.

General Zod is a supervillain and enemy of Superman of DC Comics. Zod is from Krypton, Superman’s home planet, so the two have many of the same superpowers. Zod appeared in the movies “Superman” and “Superman II”, and was played by English actor Terence Stamp.

Looking for 66-across? That would be a wild goose chase, as it doesn’t exist.

41. Kind of look with bangs and eye shadow : EMO

“Bangs” is another word that caught me out when I arrived in the US. “Bangs” back in Ireland are called “a fringe”. Apparently the US term is derived somehow from the hair on horses.

Éric Rohmer was a French film director, critic and journalist. He was regarded as one of the French New Wave filmmakers, along with François Truffaut and Jean-Luc Godard.

9. What you might see the big game on : SAFARI

Jeff Probst is the highly successful host of the US version of the reality show “Survivor”. He is obviously a friendly guy, and ended up in a 3-year relationship with Julie Berry, one of the contestants from “Survivor: Vanuatu”.

Mike Rowe is the host of the successful reality show called “Dirty Jobs” that is broadcast by “Discovery Channel”. Rowe is also a spokesperson for Ford Motor Company in a series of television commercials. He is quite the singer too, as he sang professionally with the Baltimore Opera for a while.

The Crisco brand of shortening was the first shortening to be made entirely from vegetable oil. Although that sounds like a good thing, it’s actually made by hydrogenating vegetable oil so that it has physical properties similar to the animal shortening it was designed to replace. This hydrogenation turns good fats into bad fats, so medical professionals suggest limited intake.

45. Options on an IHOP table : SYRUPS

Mario Batali is an American celebrity chef who specializes in Italian cuisine. He is often referred to as “Molto Mario”.

48. Exclamation that’s also the name of a cable channel : BRAVO!

In the days when I played the occasional video game, the best of the bunch was undoubtedly Myst. It is a game full of puzzles with the player wandering through a beautifully-designed (for its day) interactive world.