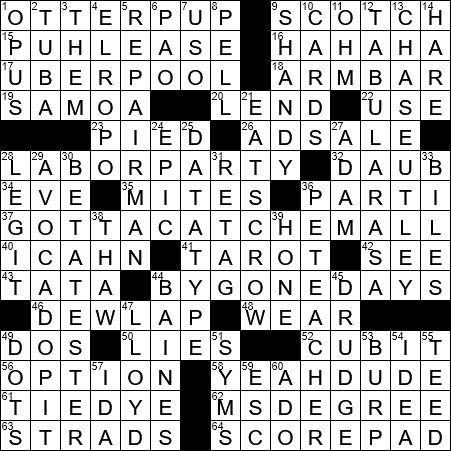 1. Youngster in a stream : OTTER PUP

Uber is a ridesharing service that was founded in 2009 and is based in San Francisco. The service is somewhat controversial and has been described as an illegal taxicab operation. Central to Uber’s service is the company’s mobile app, which can use the client’s GPS location to help find the nearest available ride. Uber’s main competitor is Lyft.

Slapstick is a physical form of comedy or horseplay. Back in the late 19th century, the term described a device made from two sticks loosely fastened together, which could be “slapped” together to create a sound effect offstage. The sound effect added to the laugh when a clown or actor was given a slap on stage.

“To daub” is to coat a surface with something thick and sticky, like say plaster or mud.

According to the Bible, Eve was created as Adam’s companion by God. God created Eve from Adam’s rib.

“Pokémon” is the second-biggest video game franchise in the world, second only to the “Mario” franchise. “Pokémon” is a contraction of “Pocket Monsters”.

46. Something found on a hound : DEWLAP

A dewlap is a flap of skin that hangs below the neck of some creatures. Dewlaps are found on anything from dogs to iguanas.

A shag cut is a layered hairstyle. Actress Meg Ryan famously sported a shag cut for many years.

“A Shropshire Lad” is a collection of poems published in 1896, written by the English poet A. E. Housman. Housman couldn’t find a publisher for his work, so he had to use his own money to get the collection in print. The poems all hark back to the simple life of a young man in rural England. The collection gained in popularity as young men went overseas to fight in the Second Boer War, and then again during WWI. The nostalgic themes struck a chord with the young soldiers.

Our term “dude” arose as slang in New York City in the 1880s, when it was used to describe a fastidious man. In the early 1900s, the term was extended to mean “city slickers”, Easterners who vacationed in the West. The first use of the term “dude ranch” was recorded in 1921.

“El ropo” is American slang not only for a big cheap cigar, but also for a cannabis cigarette, so I am told …

11. Eponym of an electrical law : OHM

“The Last Emperor” is a 1987 biographical film about Puyi, the last Emperor of China. “The Last Emperor” was unique in that it was the first time the Chinese government allowed filming in the Forbidden City in Beijing. In fact, Queen Elizabeth II was on a state visit to China the same time that filming was taking place, and the Chinese government gave priority to filming, so the British royal party could not visit the Forbidden City.

In the world of software development, the first tested issue of a new program is usually called the “alpha” version. Expected to have a lot of bugs that need to be fixed, the alpha release is usually distributed to a small number of testers. After reported bugs have been eliminated, the refined version is called a “beta” and is released to a wider audience, but with the program clearly labeled as “beta”. The users generally check functionality and report further bugs that are encountered. The beta version feeds into a release candidate, the version that is tested just prior to the software being sold into the market, hopefully bug-free.

Lloyd Price is an R&B singer. One of Price’s hits is 1959’s “Personality”, a release that earned him the nickname “Mr. Personality”.