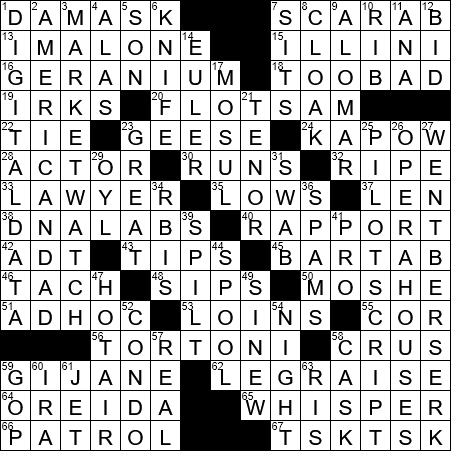 The Illini (also “Fighting Illini”) are the athletic teams and marching band of the University of Illinois at Urbana-Champaign. “Illinois” is a French name that was given to the people who lived in the area (called “Illiniwek”).

33. Either Bill or Hillary Clinton, once : LAWYER

On the sitcom “Seinfeld”, Jerry’s eccentric maternal uncle is Leo, played by actor Len Lesser. Lesser acted in movies and television for many years, alongside some of the greats of stage and screen. He was fond of telling a marvelous story about acting in the 1973 film “Papillon” starring Steve McQueen and Dustin Hoffman. In his role as a prison guard, Lesser was required to shove McQueen, but McQueen didn’t think that Lesser was pushing him roughly enough. He turned to Lesser and told him “Don’t think of me as a movie star. Think of me as a character in a show”, encouraging him to be more aggressive. When McQueen walked away, Hoffman was left standing there beside Lesser. He paused and quietly said to Lesser, “Think of me as a movie star …”

ADT is a home and small-business security company based in Boca Raton, Florida. The company was founded back in 1874 by Edward Calahan. Calahan had invented the stock ticker several years earlier, and ran the Gold and Stock Telegraph Company. Calahan was awoken one morning by the sound of a burglar in his house, and so he decided to develop a telegraph-based security alarm system. The success of the system led to the founding of American District Telegraph, later known as ADT.

45. A screwdriver might be added to it : BAR TAB

The tachometer takes its name from the Greek word “tachos” meaning “speed”. A tachometer measures engine revolutions per minute (rpm).

65. What a laryngitis sufferer may do : WHISPER

Roberto Alomar is a former Major League Baseball player, considered by many to be the greatest ever second baseman. Alomar won 10 Gold Glove awards in his career, which is more than any other second baseman in history.

Mosul is located in northern Iraq and is the third largest city in the country, after Baghdad and Basra. Mosul is located on the west bank of the Tigris river, opposite the ruins of the ancient Assyrian city of Nineveh in the east bank.

“Swabbie” (also “swabby, swab, swabber”) is a slang term for a sailor that we’ve been using since the late 1700s. A “swab” was originally a member of the crew assigned to the swabbing (mopping) of the ship’s decks.

Jacuzzi is one of those brand names that has become so much associated with the product that it is often assumed to be a generic term. The Jacuzzi company was founded in 1915 by the seven(!) Jacuzzi brothers in Berkeley California. The brothers, who were Italian immigrants, pronounced their name “ja-coot-si”, as one might suspect when one realizes the name is of Italian origin. The company started off by making aircraft propellers and then small aircraft, but suspended aircraft production in 1925 when one the brothers was killed in one of their planes. The family then started making hydraulic pumps, and in 1948 developed a submersible bathtub pump so that a son of one of the brothers could enjoy hydrotherapy for his rheumatoid arthritis. The “hydrotherapy product” took off in the fifties with some astute marketing towards “worn-out housewives” and the use of celebrity spokesman Jack Benny.

Sue Grafton writes detective novels, and her “alphabet series” features the private investigator Kinsey Millhone. She started off with “A Is for Alibi” in 1982 and is working her way through the alphabet. Apparently Ms. Grafton has already decided that “Z is for Zero” will be the final title in the series. What a clever naming system!