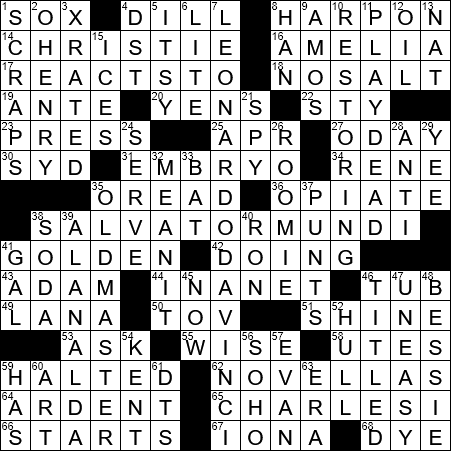 Themed answers refer to the record-breaking sale of the painting “SALVATOR MUNDI” by Leonardo da Vinci in November 2017:

Often a dill pickle is actually a pickled gherkin, as the gherkin and cucumber are different cultivars within the same species. Here in the US, dill is commonly added to the pickling vinegar or brine, but this wasn’t the case when I used to eat them back in Ireland (I can’t stand dill!). You might see jars labeled as “cornichons”, but they’re gherkins. “Cornichon” is just the French word for “gherkin”.

8. Talk about ad nauseam : HARP ON

To do something “ad nauseum” is to do so to a ridiculous degree, to the point of nausea. “Ad nauseum” is the Latin for “to sickness”.

Christie’s is an auction house based in London, the largest auction house in the world. The business was founded in 1766 by James Christie.

Belgian artist René Magritte was a surrealist. His most recognized work maybe is “The Son of Man”, a painting he created as a self-portrait. It is the work that shows a man in a bowler hat with his face covered by an apple. The image features prominently in a great movie, the 1999 remake of “The Thomas Crown Affair”.

38. Renaissance painting that was sold in November 2017 for a record $450.3 million : SALVATOR MUNDI

“Salvator Mundi” (“Savior of the World” in Latin) is a painting by Leonardo da Vinci that dates back to circa 1500. It is speculated that the work was commissioned by Louis XII of France, and came into the possession of Charles I of England in 1625. It passed through several hands before being auctioned off in 1763 along with several pieces of art from Buckingham Palace in London (then “Buckingham House”). The painting reemerged in 1900 when it was bought by a British collector, by which time it had been damaged in attempts at restoration. Also, the work was now attributed to Bernardino Luini, a follower of da Vinci. In 1959, it was sold as a painting by Giovanni Antonio Boltraffio, one of Leonardo’s students, for the princely sum of 45 pounds. By 2011, the heavily overpainted work had been restored and attributed to Leonardo da Vinci himself, and was on display in the National Gallery in London. “Salvator Mundi” was purchased by Abu Dhabi’s Department of Culture and Tourism in November, 2017 for just over $450 million, making it the most expensive painting ever sold.

Lana Turner started work as a Hollywood actress at a very young age, signing up with MGM at only sixteen. Early in her career she earned the nickname “The Sweater Girl” after wearing a pretty tight sweater in the film “They Won’t Forget”, which was her film debut. She married eight times, to seven different husbands, the first of which was bandleader Artie Shaw. Shaw and Turner eloped and married on their very first date, when the young actress was just nineteen years old. After divorcing Shaw she married restaurateur Joseph Crane, but had the marriage annulled when she found out that Crane was still married to his first wife. The two had a daughter together, and so remarried when Crane’s divorce was finalized. Cheryl Crane was the daughter from the marriage to Joseph and she lived with Turner after her parents split up. When Cheryl was 14-years-old, her mother was romantically involved with a shady character named Johnny Stompanato. One evening Cheryl found her mother engaged in a violent argument with Stompanato, and Cheryl became so scared that she pulled out a gun and killed him in what was deemed to be justifiable homicide. Turner’s last marriage was to a nightclub hypnotist, Ronald Pellar, and that union lasted just six months as Pellar disappeared one day with a lot of Turner’s money and jewelry. Years later Turner said, “My goal was to have one husband and seven children, but it turned out to be the other way around.”

Amos Oz is an Israeli writer. Oz has written 18 books in Hebrew and his works have been translated into 30 languages, including Arabic.

Vampire bats feed mostly in the blood of mammals, including humans. When they find a suitable “victim”, often one that is asleep, the bat usually lands close by and approaches its “meal” on the ground. It makes a small cut with its razor-sharp teeth and laps up the blood. The blood tends to flow freely as the bat’s saliva contains anticoagulants. Reports of bats biting the neck of humans are very rare in the real world, but the neck is the preferred location of attack in the fantasy world of vampires.

Author and journalist Ron Chernow is perhaps best known as a biographer. Chernow wrote about the lives of two US presidents: Ulysses S. Grant and George Washington. His biography of Founding Father Alexander Hamilton was adapted into the incredibly successful stage musical “Hamilton” by Lin-Manuel Miranda.

Ulysses S. Grant (USG) had risen to commander of all the Union armies by the end of the Civil War. He was elected as the 18th president of the US in 1869. Grant served two terms as president, and also made a failed bid for a third term. Grant’s reputation was tarnished by his apparent tolerance of corruption in his administration. On the other hand, Grant worked hard to protect African Americans during Reconstruction after the Civil War, and pursued peaceful relations with Native Americans.

45. Word said before “then,” oxymoronically : NOW

The word “oxymoron” is in itself an oxymoron. It is derived from the Greek words “Oxys” and “moros” meaning “sharp” and “stupid”.

The singer Bessie Smith had the nickname “The Empress of the Blues”. Smith was the most popular blues singer in the twenties and thirties.

54. Superman without a cape : KENT

“Dark Ages” was a term that used to be popular as a description of the period following the decline of the Roman Empire in Europe, the period after the “light of Rome” was extinguished. The Dark Ages were said to end with the rise of the Italian Renaissance in the 14th century. The Italian Renaissance was centered on the cities of Florence and Siena in Tuscany.