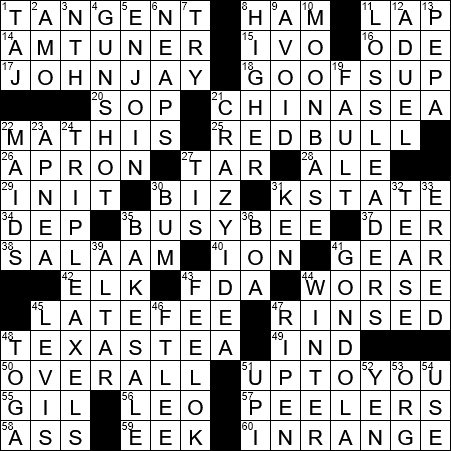 The answers to the five starred clues have a very unusual property in common. What is it? And can you think of a familiar two-word exclamation, of five and three letters, respectively, that shares that property?

The answers to the starred clues end with a word that sounds like a letter. That same letter starts the answer:

After a few seconds noodling, I came up with “GOLLY GEE!” as the exclamation referred to in the note.

The most familiar trigonometric functions are sine, cosine and tangent (abbreviated to “sin, cos and tan”). Each of these is a ratio, a ratio of two sides of a right-angled triangle.

Ivo Andrić was a novelist from former Yugoslavia who won the 1961 Nobel Prize for Literature.

John Jay was one of the Founding Fathers and President of the Continental Congress from 1778 to 1779. From 1789 to 1795, Jay was the nation’s first Chief Justice of the Supreme Court. He retired from the court to serve as the second Governor of New York.

Okinawa Island is the largest of the Ryukyu Islands, a long chain that arcs over 1,000 miles south of Japan in the direction of Taiwan. Okinawa is home to over 30 US military facilities, including Kadena Air Base and the Marine Corps’ Camp Foster.

“Bluejacket” is a familiar term used for enlisted sailors in the Royal Navy and US Navy. In fact, the basic handbook for US Navy personnel is titled “The Bluejacket’s Manual”.

31. The Wildcats of the Big 12 Conference, informally : K-STATE

The word “salaam” is an Anglicized spelling of the Arabic word for “peace”. It can describe an act of deference, and in particular a very low bow.

Back in the 17th century, paraphernalia was a woman’s property, above and beyond that which was classified as her dowry. Nowadays we tend to use the word to mean just “personal belongings”.

Visa doesn’t actually issue any credit or debit cards. Visa just sells the electronic systems and infrastructure to banks who then put the Visa logo on their own cards. And so, both the customer and merchant know to use the VISA system when making a transaction.

Gil Hodges was a professional baseball player and manager. Perhaps Hodges’ most celebrated achievement was managing the New York Mets team (the “Miracle Mets”) that won the 1969 World Series. Hodges died from a heart attack just a few years later in 1972, when he was only 48 years old.

In legal terms, “to enjoin” means “to prohibit”, to issue an injunction prohibiting a specific act.

Salt-n-Pepa are an all-female hip hop trio from New York, made up of “Salt” (Cheryl James), “Pepa” (Sandra Denton) and “DJ Spinderella” (Deidra Roper). Their 1991 song “Let’s Talk Sex” created quite a fuss as the lyrics explored the subject of sex, and safe sex in particular. A later version addressed the dangers of AIDS.

The music for the Christmas song “Deck the Halls” is a traditional Welsh tune that dates back to the 16th century. The same tune was used by Mozart for a violin and piano duet. The lyrics with which we are familiar (other than the “f-la-la”) are American in origin, and were recorded in 19th century.

44. Perpetual period in Narnia in “The Lion, the Witch and the Wardrobe” : WINTER

Fort Lee, New Jersey is located at the western side of the George Washington Bridge that spans the Hudson River. Fort Lee is known as the birthplace of the motion picture industry. The world’s first movie studio was built there by Thomas Edison, a facility known as the Black Maria.

The Hudson River flows through eastern New York State from Henderson Lake in the Adirondacks to the Port of New York and New Jersey. The river is named for the English explorer Henry Hudson who navigated it in 1609.

In Ancient Rome the classical attire known as a toga (plural “togae”) was usually worn over a tunic. The tunic was made from linen, and the toga itself was a piece of cloth about twenty feet long made from wool. The toga could only be worn by men, and only if those men were Roman citizens. The female equivalent of the toga was called a “stola”.

Founded in 1958, United Press International (UPI) used to be one of the biggest news agencies in the world, sending out news by wire to the major newspapers. UPI ran into trouble with the change in media formats at the end of the twentieth century and lost many of its clients as the afternoon newspapers shut down due to the advent of television news. UPI, which once employed thousands, still exists today but with just a handful of employees.