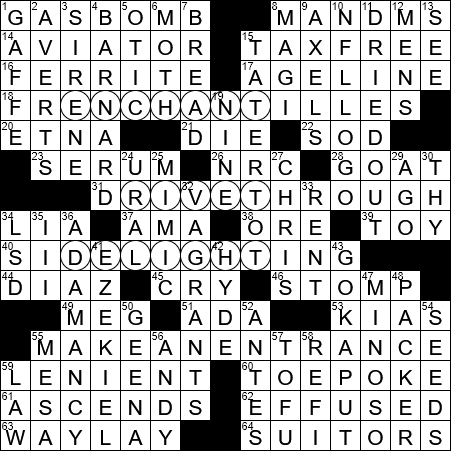 Themed answers each include a hidden word that it a synonym of “ENTRANCE”, that’s “entrance” and not “entrance”:

8. Mars produces billions of them each week : M AND MS

Dominica is an island nation in the Caribbean, one not to be confused with the Dominican Republic. Christopher Columbus and his crew first spotted the island on a Sunday. Columbus named it “Dominica” as “dominica” is Latin for “Sunday”.

“Truth serum” is a common name given to any medication used to obtain information from subjects who are unwilling to give the information willingly. Examples of drugs used as a truth serum are scopolamine, sodium pentathol and ethanol (aka “alcohol”, like that served in a bar!).

The “Lia Fáil” is the coronation stone that is found on the Hill of Tara, the traditional seat of the High Kings of Ireland. “Lia Fáil” translates from Irish as “stone of destiny”.

Rodrigo Diaz de Vivar was known as El Cid Campeador, which translates as “The Champion” or perhaps “The Lord, Master of Military Arts”. El Cid was a soldier who fought under the rule of King Alfonso VI of Spain (among others). However, he was sent into exile by the King in 1080, after acting beyond his authorization in battle. El Cid then offered his services to his former foes, the Moorish kings, After a number of years building a reputation with the Moors, he was recalled from exile by Alfonso. By this time El Cid was very much his own man. Nominally under the orders of Alfonso, he led a combined army of Spanish and Moorish troops and took the city of Valencia on the Mediterranean coast, making it is headquarters and home. He died there, quite peacefully in 1099.

The Kia Sedona is a minivan that is also sold as the Kia Carnival.

Our word “gaffe”, meaning a social blunder, comes from the French “gaffe” meaning “clumsy remark”, although it originally was the word for a boat hook. The exact connection between a boat hook and a blunder seems to be unclear.

The larvae of several types of moth are noted for eating fabrics made from natural fibers such as wool or cotton. Many people store woolens in cedar chests believing that the scent of the wood prevents a moth infestation. In fact, the only known effective repellent is the naphthalene found in mothballs, which might be a health concern for humans. One way to kill moth larvae in fabric is to freeze the garment for several days at a temperature below 8 degrees centigrade.

“Captain America: The First Avenger” is a superhero film released in 2011 based on the Marvel Comics character. Chris Evans appears in the title role. This one is set in WWII, so I might take a look one day …

33. $2 for Mediterranean Avenue, in Monopoly : RENT

Ezekiel is recognized as a Hebrew prophet in the three main Abrahamic religions. Ezekiel’s story is told in the Jewish and Christian traditions in the Book of Ezekiel. Ezekiel’s final resting place is said to be a tomb in southern Iraq near the town of Al Kifl.

Minnie Minoso is a Cuban-born former baseball player who had a very long professional career. He is one of just two player in Major League history to have played in five separate decades (40s-80s), the other being Nick Altrock.

“Thelma & Louise” is a thought-provoking movie, but one that is very entertaining. It was directed by Ridley Scott in 1991, and stars two fabulous leads in Geena Davis and Susan Sarandon. You’ll also spot Brad Pitt onscreen in his first significant movie role.

Mesa Verde National Park is in Colorado. Mesa Verde is home to ancient cliff dwellings built by the Puebloan people, also know as the Anasazi.

1995’s “Toy Story” was the world’s first feature-length computer-animated movie. “Toy Story” was also the studio Pixar’s first production. The main roles in the film are Woody and Buzz Lightyear, voiced by Tom Hanks and Tim Allen respectively. Hanks was the first choice to voice Woody, Allen was asked to voice Buzz after Billy Crystal turned down the role.