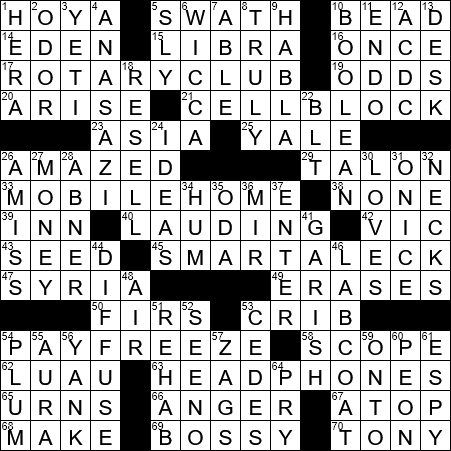 Themed answers are HEADED by types of PHONES:

The athletic teams of Georgetown University are known as the Hoyas. The name is derived from “Hoya Saxa”, a traditional cheer yelled out at Georgetown games as far back as 1893. The term is a mixture of Greek and Latin, with the Greek word “hoya” meaning “such” or “what”, and “saxa” translating from Latin as “rocks” or “small stones”. The cheer is usually rendered in English as “what rocks!”.

The astrological sign of Virgo is associated with the constellation of the same name. The Virgo constellation is related to maidens (virgins), purity and fertility.

The stock phrase “Once upon a time” has been used in various forms as the start of a narrative at least since 1380. The stock phrase at the end of stories such as folktales is often “and they all lived happily ever after”. The earlier version of this ending was “happily until their deaths”.

The first Rotary Club meeting was held in 1905 in Chicago in the office of one of the four businessmen who attended. The name “Rotary Club” was chosen as the plan was to “rotate” the locations of the meetings to the offices of each of the club’s members in turn.

Siberia is a vast area in Northern Asia. The region’s industrial development started with the construction of the Trans-Siberian Railway from 1891 to 1916, which linked Siberia to Russia in the west.

The Old Vic is a very famous theater (or I should I say “theatre”?) in London, previously known as the Royal Coburg Theatre and then the Royal Victorian Theatre (giving it the current name “The Old Vic”). The theater owes a lot of its fame and standing to the fact that it housed the National Theater of Great Britain after it was founded in 1963 by Sir Laurence Olivier. Today the National Theater has new, modern premises, but the Old Vic Theatre Company stills garners a lot of attention. American actor Kevin Spacey was the artistic director of the company from 2003 until 2015.

43. Something a strawberry has on the outside : SEED

An achene is a simple, one-seeded dry fruit that is produced by some flowering plants. The so-called “seeds” of strawberries are actually achenes. The strawberry’s seed is found inside the achene. The strawberry itself is an aggregate fruit with lots of achenes that are attached to accessory tissue, albeit very delicious accessory tissue.

The modern state that we know as Syria was established after WWI as a French mandate. Syria was granted independence from France in 1946.

53. Place where a mother might sing “Rock-a-Bye Baby” : CRIB

Sardi’s is a renowned restaurant in the Theater District of Manhattan that was opened in 1927 by Italian immigrant Vincent Sardi, Sr. Sardi’s is famous for attracting celebrities who pose for caricatures that are then displayed on the restaurant’s walls. After the death of actress and director Antoinette Perry in 1946, her friend and partner Brock Pemberton was having lunch at Sardi’s and came up with idea of a theater award that could be presented in Perry’s honor. The award was to be called the Tony Award. In fact, Vincent Sardi, Sr. was presented with a special Tony at the first award ceremony, held in 1947.

3. Dubious sighting in the Himalayas : YETI

The yeti, also called the abominable snowman, is a beast of legend. “Yeti” is a Tibetan term, and the beast is fabled to live in the Himalayan regions of Nepal and Tibet. Our equivalent legend in North America is that of Bigfoot, also known as Sasquatch. The study of animals whose existence have not yet been substantiated is called cryptozoology.

“Habla español?” is Spanish for “Do you speak Spanish?” “Aqui se habla español” translates as “Spanish is spoken here”.

10. Kind of logic in which all values are either true or false : BOOLEAN

The “$” sign was first used for the Spanish American peso, in the late 18th century. The peso was also called the “Spanish dollar” (and “piece of eight”). The Spanish dollar was to become the model for the US dollar that was adopted in 1785, along with the “$” sign.

“Li’l Abner” was created and drawn by Al Capp for over 43 years starting in 1934. Al Capp stopped producing the strip in 1977, largely due to illness (he died from emphysema two years later). As the strip finished up, he went so far as to apologize to his long-standing fans, saying that he should have stopped 3-4 years earlier as he felt that the quality of his work had gone down in those latter years. The comic strip character’s full name is “Li’l Abner Yokum”.