Constructed by: George Barany & Michael Shteyman
Edited by: Will Shortz 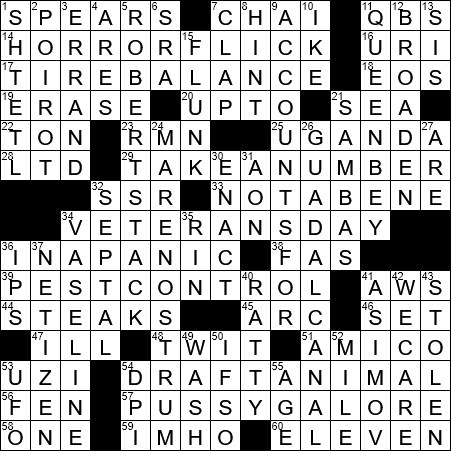 We have a mini-theme today, with the number “Eleven” hinting at VETERAN’S DAY (today, 11/11). We have ELEVEN 11-LETTER answers in the grid:

18. Whose tears create the morning dew, in myth : EOS

In Britain and Ireland the most common type of business (my perception anyway) is one that has private shareholders whose liability is limited to the value of their investment. Such a company is known as a private limited company, and has the letters “Ltd” after the name. If the shares are publicly traded, then the company is a public limited company, and has the letters “plc” after the name.

The former Soviet Union (USSR) was created in 1922, not long after the Russian Revolution of 1917 that overthrew the Tsar. Geographically, the new Soviet Union was roughly equivalent to the old Russian Empire, and comprised fifteen Soviet Socialist Republics (SSRs).

46. Group in any circle in a Venn diagram : SET

“The Avengers” was must-see television when I was growing up. “The Avengers” was a sixties comedy spy series set in England during the days of the Cold War. The hero was John Steed, played ably by Patrick MacNee. Steed had various female partners as the series progressed, the first of which was Cathy Gale, played by Honor Blackman (who also played Pussy Galore in “Goldfinger”). Following Ms. Gale was Emma Peel played by the wonderful Diana Rigg. Finally there was Tara King, played by Linda Thorson.

60. How many letters are in the longest answers in this puzzle – or how many of these answers there are : ELEVEN

The Yiddish word for “town” is “shtot”, and so “shtetl” is the diminutive form meaning “small town”. The fictional shtetl featured in the musical in “Fiddler on the Roof” is called Anatevka, which is also the title of my favorite song from the show.

“Yentl” is a play that opened in New York City in 1975. The move to adapt the play for the big screen was led by Barbara Streisand, and indeed she wrote the first outline of a musical version herself as far back as 1968. The film was eventually made and released in 1983, with Streisand performing the lead role.

2. Agatha Christie once described him as a “detestable, bombastic, tiresome little creature” : POIROT

The actor Robert Stack appeared in many Hollywood films, but is best known for his TV appearances. Stack played the lead in the crime series “The Untouchables” and was the host of “Unsolved Mysteries”.

The samba is a Brazilian dance that is very much symbolic of the festival known as Carnival. Like so much culture around the world, the samba has its roots in Africa, as the dance is derived from dances performed by former slaves who migrated into urban Rio de Janeiro in the late 1800s. The exact roots of the name “samba” seem to have been lost in the mists of time. However, my favorite explanation is that it comes from an African Kikongo word “semba” which means “a blow struck with the belly button”. We don’t seem to have a need for such a word in English …

Guadalcanal is the largest island in the Solomon Islands in the South-Western Pacific. The island is named after Guadalcanal, a village in Andalusia, Spain which was the home of the explorer who discovered it.

32. Acting as a partition : SEPTAL

Vaseline is a brand of petroleum jelly owned by Unilever. The term “vaseline” has entered many languages, including English, as a generic term for petroleum jelly.

“Xerosis” is the medical term for dry skin, from the Greek word “xero” meaning “dry”.

A netizen is an “Internet citizen”, someone with a presence on the Internet. I guess I would be a netizen, then …

53. Subj. of some conspiracy theories : UFO

Dots per inch (DPI) is a term usually reserved for printing resolution, a measure of the density of individual ink dots that can be positioned on the printed surface. Screen resolution is measured in pixels per inch (PPI), a measure of how closely individual pixels can be placed in a digital display.