Constructed by: Patrick Berry
Edited by: Will Shortz 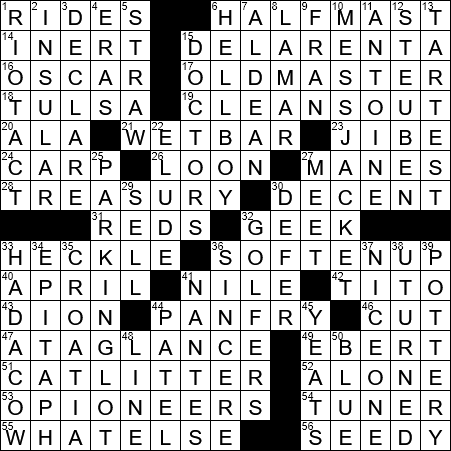 Back at the 1893 World’s Columbian Exposition held in Chicago there were rides and amusements that were all concentrated in one place, away from the exhibition halls. The rides included the world’s first Ferris wheel, and one could also see Buffalo Bill Cody’s Wild West show. All these attractions were located in the mile-long linear park on the South Side of Chicago known as Midway Plaisance. Ever since then, the attractions at any fair have been located at “the midway”.

Oscar de la Renta is a fashion designer who really came to prominence in the sixties when his designs were worn by Jacqueline Kennedy.

Great American Ball Park is named after Great American Insurance Group. It seems a pity to me that the name was chosen for a sponsor, as it is such a grand name for a field dedicated to America’s pastime. Oh, and it is home to the Cincinnati Reds baseball team.

Originally, a geek was a sideshow performer, perhaps one at a circus. We use the term today for someone regarded as foolish or clumsy, and also for someone who is technically driven and expert, but often socially inept.

Originally, the verb “to heckle” meant to question severely, and for many years was associated with the public questioning of parliamentary candidates in Scotland. In more recent times, the meaning has evolved into questioning that is less polite and that is directed at standup comics.

Herodotus was a historian from Ancient Greece. Roman orator Cicero referred to him as “the Father of History” as Herodotus was regarded as the first historian to work methodically and publish a well-constructed narrative. The only known work completed by Herodotus is “The Histories”.

Marshal Josip Broz Tito led the Yugoslav resistance during WWII. After the war, he led the country as Prime Minister and then President.

A latke is a delicious potato pancake (I’m Irish … so anything made with potato is delicious!).

“Band-Aid” is a brand name owned by Johnson & Johnson, although like many popular brands “band-aid” has become the generic term for an adhesive bandage, at least here in North America. The generic term we use in the British Isles for the same product is “plaster” …

Roger Ebert co-hosted a succession of film review television programs for over 23 years, most famously with Gene Siskel until Siskel passed away in 1999. Siskel and Ebert famously gave their thumbs up or thumbs down to the movies they reviewed.

American novelist Willa Cather wrote what’s referred to as the “prairie trilogy”, books that tell the story of Swedish immigrants living in Nebraska. The titles in the trilogy are “O Pioneers!”, “The Song of the Lark” and “My Antonia”. Cather won the Pulitzer Prize for another novel, “One of Ours”, that is set in Nebraska and the French battlefields of WWI.

Lamar Odom is a basketball forward in NBA. Apparently Odom loves candy, and that’s how he earned his nickname, “The Candy Man”. Odom was married to Khloé Kardashian, and the couple’s wedding featured on an episode of the reality show “Keeping Up with the Kardashians”. Not a show that I have ever seen …

“Kukla, Fran and Ollie” is an early television show that aired from 1947-1957. Kukla and Ollie (Oliver J. Dragon) were puppets and Fran was Fran Allison, usually the only human on the show.

10. Bit of attire for a bellhop : MESS JACKET

A bell captain supervises bellhops in a hotel. The term “bellhop” comes from the fact that the front desk clerk used to ring a “bell” to summon a porter, who then “hopped” to attention and received his or her instructions.

Antoine “Fats” Domino was born and raised in New Orleans, with Creole as his first language. He made into the big time in 1949 when he recorded an early rock and roll record called “The Fat Man”. That record sold over a million copies, the first rock and roll record to achieve that milestone.

Steuben Glass Works was a manufacturer of art glass that was founded in 1903 and was shut down not so long ago, in 2011. The glass factory was located in Corning, New York. The city of Corning is in Steuben County, giving the company its name.

The phrase “don’t have a cow” originated in the fifties, a variation of the older “don’t have kittens”. The concept behind the phrase is that one shouldn’t get worked up, it’s not like one is giving birth to a cow.

BTW, that would be a grave marker.

Zagreb is the capital city of the Republic of Croatia. Zagreb has been around a long, long time, and dates back to the diocese of Zagreb that was founded at the end of 11th century.

“Lion” is a 2016 film based on the autobiographical book “A Long Way Home” by Saroo Brierley. Brierley is an Indian-born Australian who was accidentally separated from his mother when he was 5 years old, ending up stranded on a train that took the young boy nearly 1,500 km from his home. The excellent film adaption stars Dev Patel as the older Brierley, who searches for his birth-family. Excellent movie …

The title character in Lewis Carroll’s 1865 novel “Alice’s Adventures in Wonderland” is based on a child named Alice Liddell. Lewis Carroll (real name “Charles Lutwidge Dodgson”) met the Liddell family while he was photographing Christ Church Cathedral in Oxford, after which he befriended the Liddells. Carroll told the three Liddell sisters (including Alice) a story about a little girl named Alice and her adventures, in order to entertain the children while on a boating trip on the River Isis in Oxford. He elaborated on the story for the girls on a subsequent boat trip, and agreed to write down the tale as the children loved it so much. Carroll’s writings became a full-fledged manuscript, including the author’s own illustrations. It was first published in 1865, three years after that boat trip.