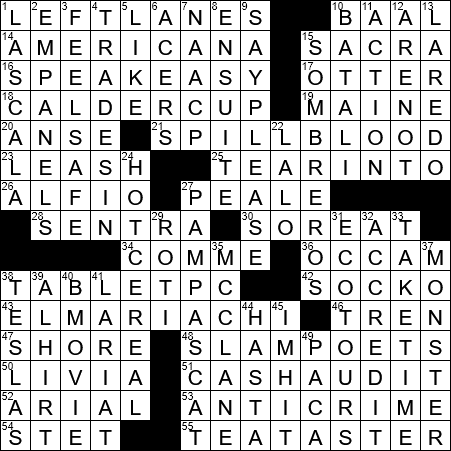 10. Whom the children of Israel served, per Judges : BA’AL

According to Canaanite mythology, Ba’al was the most powerful of all gods. He was worshiped as the sun, storm and fertility god.

An ana (plural “anas”) is a collection, perhaps of literature, that represents the character of a particular place or a person. “Ana” can be used as a noun or as a suffix (e.g. “Americana”).

“To bootleg” is to make or smuggle alcoholic drinks illegally. The term arose in the late 1800s as slang for the practice of concealing a flask of liquor down the leg of a high boot. The term has been extended to mean the illegal production and sale of just about anything.

The Chow Chow is a breed of dog that originated in China. The Chinese name for the breed is “Songshi Quan”, which translates as “puffy-lion dog”, a rather apt name given its appearance …

“Cavalleria rusticana” is an opera by Italian composer Pietro Mascagni that was first performed in 1890. The title translates as “Rustic Chivalry”, which is reference to the opera’s bucolic setting. The beautiful symphonic intermezzo from “Cavalleria rusticana” is often heard in “highlights from movie soundtracks” as it was used in the opening of “Raging Bull” and the finale of “The Godfather Part III”.

27. Portraitist with a Baltimore museum named after him : PEALE

Artist Charles Willson Peale’s most famous works are portraits of historical figures from the American Revolution, most notably George Washington. Benjamin Franklin, John Hancock, Thomas Jefferson and Alexander Hamilton. Peale had a lot of children, sixteen in all with two wives. Many of those children were named for his favorite artists, including Rembrandt Peale who became a celebrated artist in his own right.

The Nissan Sentra is sold as the Nissan Sunny back in Japan.

Ockham’s Razor (also “Occam’s Razor”) is a principle in philosophy and science that basically states that the simplest explanation is usually the correct one. This explanation is a corollary to the more exact statement of the principle, that one shouldn’t needlessly use assumptions in explaining something.

53. Describing the efforts of Batman and Spider-Man : ANTICRIME

Batman and Robin are unique among their superhero compatriots in that they have no special powers, just a whole load of cool gadgets. Batman is sometimes referred to as the Caped Crusader, Robin as the Boy Wonder, and the pair as the Dynamic Duo.

Spider-Man is a creation of Stan Lee and Steve Ditko, and first appeared in comics in 1962. Spider-Man was a somewhat groundbreaking character in that his alter ego was a teenage high school student (named Peter Parker), which marked the first time that a young person featured front and center as the superhero.

La Scala Opera House opened in 1778. It was built on the site of the church of Santa Maria della Scala, which gave the theater its name: “Teatro alla Scala” in Italian.

Acer is a Taiwanese company that I used to visit a lot when I was in the electronics business. I was very impressed back then with the company’s dedication to quality, although I have heard that things haven’t gone so well in recent years …

The full name of the NAACP, the National Association for the Advancement of Colored People, is remarkable in that it actually still uses the offensive term “colored people”. The NAACP was founded in 1909, by a group that included suffragette and journalist Mary White Ovington, wealthy socialist William English Walling, and civil rights activist Henry Moscowitz. Another member of the founding group was W. E. B. Du Bois, the first African-American to earn a doctorate at Harvard University. The date chosen for the founding of the NAACP was February 12th, 1909, the 100th anniversary of the birth of President Abraham Lincoln, the man most visibly associated with the emancipation of African-American slaves.

8. Directly connected, as a bathroom to a bedroom : EN SUITE

The expression “en suite” is an example of the French language being used in English, but with a new meaning. Firstly, the word “ensuite” translates from French as “then” or “later”. The phrase “en suite” translates as “as a set, series”. The French use the term “suite” as we do sometimes, as in a suite of connecting rooms. Over in the British Isles, “en suite”, and sometimes “en-suite” or “ensuite”, is a term used in the hotel industry for a bedroom that has a private bathroom or shower room attached. Some smaller establishments in that part of the world might rent out bedrooms with the occupants having to share bathing facilities.

10. One of the Iron Chefs on “Iron Chef America” : BATALI

Mario Batali is an American celebrity chef who specializes in Italian cuisine. He is often referred to as “Molto Mario”.

The jalapeño is a chili pepper, and a favorite of mine. The pepper’s name translates from Spanish as “from Xalapa”. Xalapa (also “Jalapa”) is the capital of the Mexican state of Veracruz, and the traditional origin of the jalapeño pepper.

15. Cocktails with Kahlúa and cream : SOMBREROS

Édouard Lalo was a classical composer from France. Lalo’s most famous work is probably the complex opera “Le roi d’Ys”, which is based on a Breton legend.

Camille Saint-Saens was one of the great French composers in my opinion. Saint-Saëns composed during the Romantic Era, and it was he who introduced the symphonic poem to France. Even his light and airy “The Carnival of the Animals” is a lovely work.

27. Striped or spotted animal named for its habitat : PAMPAS CAT

The pampas are fertile lowlands covering a large part of Argentina, Uruguay and some of Brazil. “Pampa” is a Quechua word meaning “plain”.

In an Indian restaurant, naan bread is very popular. Roti is the unleavened cousin to naan.

The 1988 action movie “Die Hard” is such a fun film. We always pull it out at Christmas when we want something “Christmassy” but different from “The Bishop’s Wife” or “It’s a Wonderful Life”. The “Nakatomi Plaza” building that features so prominently in the film is actually “Fox Plaza” (headquarters for 20th Century Fox) in Los Angeles, which was built not long before filming started.

Monster Energy is a drink containing lots of caffeine. The label on the drink usually warns the consumer about over-consumption of the contents.

Al Hirt was a trumpeter and bandleader. Hirt’s most famous recordings were the song “Java” and the album “Honey in the Horn”, as well the theme song used “The Green Hornet” TV series in the sixties.

40. Opportunity for people to act badly? : B MOVIE

The term “B movie” was used to describe movies that were made with low budgets and were intended to be the bottom half of a double feature (remember the days of double features?).

There are two species of rodents called pacas, and both are found in Central and South America. In some parts, paca is considered a gourmet dish.