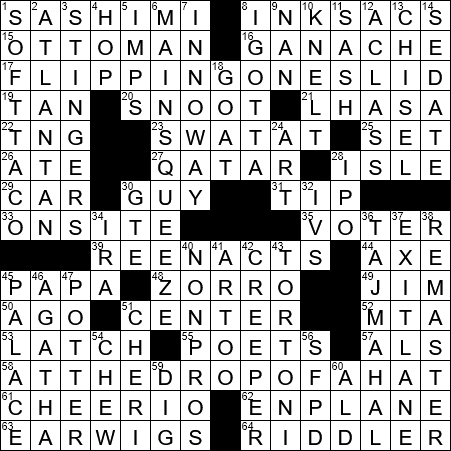 We have a mini-theme today, with some grid art. Three sets of black squares in the grid resemble hats that are FLIPPING, DROPPING downwards:

“Sashimi” is thinly sliced raw fish, although it can also be raw meat. The word “sashimi” translates literally as “pierced body”, which may be a reference to the practice of sticking the tail and fin to sliced fish to identify it.

Octopodes and squid have the ability to release a dark pigment into the water as a means of escape. The dark pigment is called cephalopod ink (the squid and octopus belong to the class cephalopoda). The dark color is created by melanin, the same substance that acts as a pigment in human skin.

15. What can get two feet higher : OTTOMAN

The piece of furniture known as an ottoman can be a couch, usually with a head but no back or sides. Here in the US, the term more usually applies to a padded and upholstered seat or bench that can also be used as a footrest. The original ottoman couch came from the Ottoman Empire, hence the name.

Ganache is a rich sauce made from chocolate and cream. To make a ganache, one pours heated cream over chopped chocolate, mixes until smooth, with perhaps a liqueur added for flavor. “Ganache” is French for “jowl”. I’m not sure how “jowl” links to a rich chocolate source, though.

Jokhang is considered by most Tibetans to be the most sacred temple in the whole of Tibet. Located in Lhasa, it was founded in the 7th century. The name “Jokhang” is translated today as “House of Buddha”.

“Star Trek: Deep Space Nine” is TV series belonging to the “Star Trek” franchise that originally ran from 1993 to 1999. This show was set on a space station, so there wasn’t much trekking going on. The stations name is “Deep Space Nine”. I never cared for this one …

27. It has the world’s highest per capita income : QATAR

Al Green is a gospel and soul music singer. Green was born in Arkansas, where he started out as a gospel singer and moved into R&B. In 1974, he was assaulted by a girlfriend who burned him badly on much of his body by pouring boiling grits over him (and then she committed suicide). The incident changed Green’s life and he turned to the church, becoming a pastor in Memphis in 1976. He continued to record music, but never really enjoyed the same success that he had in the early seventies with hits like “Let’s Stay Together” and “I’m Still In Love With You”.

58. With only slight provocation … as suggested by some black squares in this puzzle : AT THE DROP OF A HAT

It is suggested that the idiomatic phrase “at the drop of a hat” comes from the Old West, where a signal to start a fight was just a that, a drop of a hat.

The insect known as the earwig may have gotten its name from the mistaken belief that it burrowed into the human brain via the ear canal in order to lay its eggs in the brain.

The Riddler is a supervillain from the Batman universe. He first appeared in “Detective Comics” in 1948. The Riddler’s real name is Edward Nigma, who became obsessed with solving puzzles and winning prizes by cheating at school. He uses his puzzle-solving skills to cheat customers at a carnival, and eventually dons the guise of the Riddler to take on Batman.

Back in the late 1800s, a “main squeeze” was the “most important person”. It wasn’t until almost a century later the one’s main squeeze became one’s sweetheart.

11. Something the narrator of “A Visit From St. Nicholas” threw up : SASH

The poem “A Visit from St. Nicholas” was published anonymously in 1823, and is better known today by its first line “‘Twas the night before Christmas”. Most scholars believe that the poem was written by Clement Clarke Moore, a theologian from New York City. Others say that it was written by Henry Livingston, Jr. a poet from Upstate New York.

Friedrich Nietzsche was a German philosopher. Not my cup of tea …

Fitbits are wearable activity trackers that are mainly used to track the number of steps walked. Fitbit Inc. was founded in 2007 in San Francisco.

One might see an intravenous drips (IV) in an emergency room (ER).

36. Attraction on the bank of the Yamuna River : TAJ MAHAL

47. Literary orphan who lived for a while in a cupboard : POTTER

Joanne Rowling changed her name to J. K. Rowling at the request of her publisher, who believed that young boys might have shied away from reading the first “Harry Potter” book if they believed the story was written by a woman (this was 1997!). “Jo” Rowling chose J for Joanne, and K for Kathleen after her grandmother (Jo has no middle name to use).