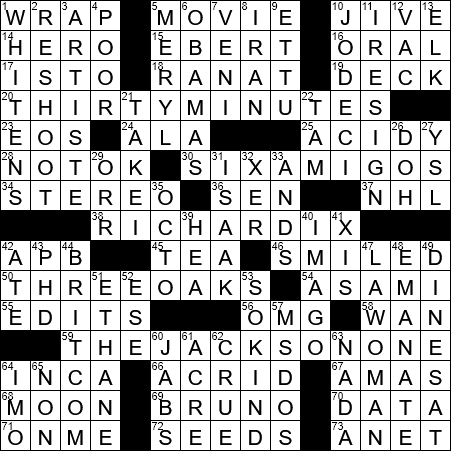 Today’s themed answers are well-known phrases that have been multiplied or divided, as defined in the relevant clue:

When shooting of a film is concluded the movie is said to “wrap”, and everyone heads to the wrap party. There is one story that “wrap” is actually an acronym for “wind, reel and print”, a reference to the transition of the filming process into post-production. But, this explanation is disputed.

Roger Ebert co-hosted a succession of film review television programs for over 23 years, most famously with Gene Siskel until Siskel passed away in 1999. Siskel and Ebert famously gave their thumbs up or thumbs down to the movies they reviewed.

In my youth I remember being taught a great card game by a German acquaintance of mine, a game called Mau Mau. Years later I discovered that Uno is basically the same game, but played with a purpose-printed deck instead of the regular deck of playing cards that’s used for Mau Mau. I hear that Mau Mau is derived from the game called Crazy Eights.

Jon Tester has been a US Senator for the state of Montana since 2007. Prior to taking his post in Washington, Tester was president of the Montana state senate, and also worked as a farmer and music teacher.

“Richard III” is one of the more famous of William Shakespeare’s historical plays. A well-known 1955 version of the play was made for the big screen with Laurence Olivier playing the title role. The most oft-quoted words from “Richard III” are probably the opening lines “Now is the winter of our discontent/Made glorious summer by this sun of York”, and Richard’s plea at the climax of battle “A horse, a horse, my kingdom for a horse!”

Scarlett O’Hara’s home is the Tara plantation, in Margaret Mitchell’s “Gone with the Wind”. Tara was founded not far from the Georgia city of Jonesboro by Scarlett’s father, Irish immigrant Gerald O’Hara. Gerald won the square mile of land on which Tara was built in an all-night poker game. He named his new abode after the Hill of Tara back in his home country, the ancient seat of the High King of Ireland. Rhett’s rival for the affections of Scarlet is Ashley Wilkes who lives at the nearby Twelve Oaks plantation.

OMG is text-speak for “Oh My Gosh!” “Oh My Goodness!” or any other G-words you might think of …

The Jackson 5 singing group was originally made up of brothers Tito, Jackie, Jermaine, Marlon and Michael. The four eldest brothers are still performing, now using the name “The Jacksons”.

Spanish conquistador Francisco Pizarro discovered the Incas in 1526, marking the beginning of the end for an ancient civilization that was to be ravaged by brutal Spanish colonists and by imported smallpox. The last leader of the Inca was Atahualpa. Pizarro staged a mock trial and then condemned Atahualpa to execution by burning. A Spanish friar intervened on behalf of the condemned man, as Atahualpa believed that if he was burned his soul would not move on to the afterlife. Pizarro, was kind enough to have Atahualpa garroted instead.

68. A new one is nearly invisible : MOON

The oft-quoted statement “Veni, vidi, vici” (“I came, I saw, I conquered”) is believed by many to have been written by Julius Caesar. The words date back to 47 BC and refer to the short war between Rome and Pharnaces II of Pontus.

29. Youngest player ever to win the Calder Memorial Trophy : ORR

32. Many a fortysomething, for short : XER

The term Generation X originated in the UK where it was the name of a book by Jane Deverson. Her book detailed the results of a study of British youths in 1964, contrasting their lifestyle to those of previous generations. It was Canadian author Douglas Coupland who was responsible for popularizing the term, with his more successful publication “Generation X: Tales for an Accelerated Culture”. By the latest accepted definition, Gen-Xers were born between 1961 and 1981.

Paul Simon and Art Garfunkel performed together as “Simon & Garfunkel”, as I am sure we all know. The friends started singing together way back in the fifties when they were still in school together. The name of their act at that time was “Tom & Jerry”.

The imago is an intermediate stage in the development of an insect. All four stages are embryo, larva, pupa and imago.

I’d say that in North America, comedian Ricky Gervais is best known as the writer and lead actor in the original version of the TV show “The Office”. Gervais’s role was taken on by Steve Carell in the US rendition of the sitcom.

The Doors formed in 1965 in Los Angeles. The band chose their name from a book by Aldous Huxley called “The Doors of Perception”.

The “smaller” alkanes are gases and are quite combustible. Methane (CH4) is the main component of natural gas with ethane (C2H6) being the second largest component. Propane (C3H8) is also found in natural gas and is heavy enough to be readily turned into a liquid by compression, for ease of transportation and storage. Butane (C4H10) is also easily liquefied under pressure and can be used as the fuel in cigarette lighters or as the propellant in aerosol sprays. The heavier alkanes are liquids and solids at room temperature.

MS-DOS (short for Microsoft Disk Operating System) was the main operating system used by IBM-compatible PCs in the eighties and for much of the nineties.

64. Opening for a personal view : IMO