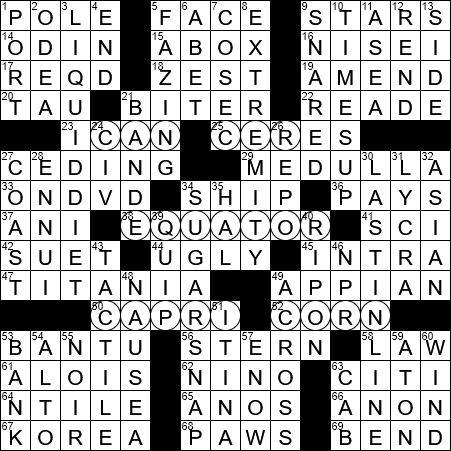 Today’s grid might be said to resemble a map of the Earth, with the hidden words CANCER, CAPRICORN and EQUATOR representing major lines of latitude appropriately placed. Also, answers along the edges of the grid require NORTH, SOUTH, EAST and WEST as prefixes to make sense:

If you want to send a note to Santa in Canada, he has his own special postal code: “North Pole, HOH OHO”. The US Postal Service suggests that we send mail for Santa to zip code 99705, which directs it to the city of North Pole, Alaska.

The Dallas Stars hockey team was founded in 1967, based in Bloomington, Minnesota, and was back then called the Minnesota North Stars. The team moved to Dallas in 1993.

In Norse mythology, Valhalla (“hall of the slain”) is a gigantic hall in the “world” of Asgard. Asgard and Valhalla are ruled by the god Odin, the chief Norse god.

There are some very specific terms used to describe the children born to Japanese immigrants in their new country. The immigrants themselves are known as “Issei”. “Nisei” are second generation Japanese, “Sansei” the third generation (grandchildren of the immigrant), and “Yonsei” are fourth generation.

Charles Reade was an English author who came to public attention with a two-act comedy play called “Masks and Faces”. Reade turned the play into a prose story in 1852 that he called “Peg Woffington”. Reade also wrote a historical novel called “The Cloister and the Hearth” about a married man who becomes a Dominican friar on hearing that his wife has died. Years later he discovers that his wife is in fact still living and a struggle develops between the man’s obligation to family and his obligation to the Roman Catholic Church.

Oberon and Titania are the King and Queen of the fairies in Shakespeare’s “A Midsummer Night’s Dream”.

The Appian Way has to be the most famous of the amazing roads of Ancient Rome. It stretched from Rome right into the south of Italy, terminating in the city of Brindisi in the southeast. The first section of the military road was completed in 312 BC, by the Roman censor called Appius Claudius Caecus, who gave the road its name “Via Appia”, or “Appian Way”.

Capri pants first became popular on the island of Capri, apparently. They were invented in Europe in 1948, but only became stylish in the US in the sixties. Mary Tyler Moore often wore Capri pants on “The Dick Van Dyke Show” and to some extent she sparked a fashion trend. After a lull in the seventies and eighties there was a resurgence in sales after Uma Thurman wore them (and danced in them) in “Pulp Fiction”. Can’t stand the look of them myself …

The Corn Belt (sometimes “Grain Belt”) is a region in the Midwest where, since the mid-1800s, corn has been the major crop. Geographically, the Corn Belt covers Iowa, Illinois, Indiana and parts of Michigan, Ohio, Nebraska, Kansas, Minnesota and Missouri. About 40% of the world’s corn production comes from the region, and most of that production is used for the feeding of livestock.

There are hundreds of Bantu languages, mainly spoken in central, east and southern Africa. The most commonly spoken Bantu language is Swahili, with Zulu coming in second.

Our word “anarchy”, used to describe a society without a publicly enforced government, comes from the Greek “an-” (without) and “arkhos” (leader).

Alzheimer’s disease is a form of dementia, the most common form of the condition. The disease is named for German psychiatrist and neuropathologist Alois Alzheimer, who first described it in 1906.

The Yucatán Peninsula is located in southeastern Mexico, where it separates the Gulf of Mexico to the northwest from the Caribbean Sea to the southeast.

“Anon” originally meant “at once” and evolved into today’s meaning of “soon” apparently just because the word was misused over time.

A southpaw is a left-handed person. The term arose as baseball slang in the mid-1880s to describe a left-handed pitcher. Back then, baseball diamonds were often laid out with home plate to the west. So, a pitcher’s left hand would be on his “south” side as he faced the batter.

The city of South Bend, Indiana is located on the St. Joseph River. The actual location is on the most southerly bend of the river, hence the name “South Bend”.

“The Owl and the Pussycat” is a poem by Edward Lear first published in 1871. It tells of an owl and a pussycat who set out to sea in a pea green boat with honey and plenty of money wrapped in a five pound note …

While there are many neighborhoods in New York City’s Manhattan, there are some broader terms that are used to navigate one’s way around the island:

I-5 is the main interstate out here on the West Coast, running from the Canada to Mexico, inland and parallel to the Pacific coastline. I-5 is the only Interstate that runs uninterrupted from the Canadian to the Mexican border.

“Ennui” is the French word for boredom, a word that we now use in English. It’s one of the few French words we’ve imported that we haven’t anglicized and actually pronounce “correctly”.

What we call spandex in the US is known as lycra in the British Isles. “Spandex” was chosen as the name for the elastic fiber as it is an anagram of “expands”.

46. Network with news at the top of each hour : NPR

“I, Tina” is the 1986 autobiography of Tina Turner. The book was so successful it was adapted into a movie called “What’s Love Got to Do With It?” The film version was released in 1993 and starring Angela Bassett as Tina Turner.

The bulk of the Palestinian territories are located in the West Bank. The term “West Bank” is a reference to lands west of the River Jordan.

The Pinot noir wine grape variety takes its name from the French for “pine” and “black”. The grapes grow in tight clusters shaped like pine cones, and are very dark in color. The Pinot noir grape is most closely associated with Burgundy wines in France, although in recent years the popularity (and price) of California Pinot noir wine has soared after it featured so prominently in the wonderful, wonderful 2004 movie “Sideways”. Grab a bottle of Pinot, and go rent the DVD…

“Enow” is an archaic form of the word “enough”.