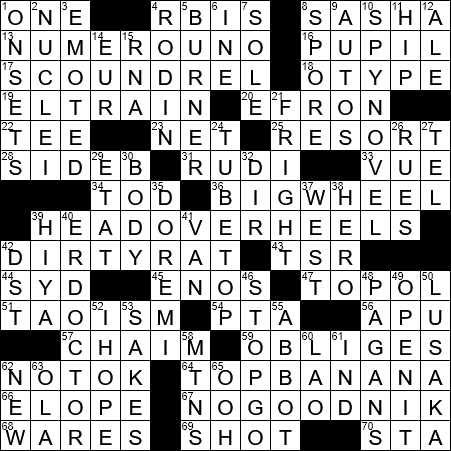 4. They’re usually not credited after errors, for short : RBIS

“Neighbors” is a 2014 comedy film starring Seth Rogen and Rose Byrne as a young couple with a newborn child. Zac Efron and Dave Franco play the leaders of a fraternity that moves into the house next door. I am told that hilarity ensues …

A lepidopterist is a person who studies butterflies and moths, a name coming from Lepidoptera, the order of insects that encompasses such flying insects. “Lepidoptera” comes from the Greek words for “scale” and “wing”.

The famed rock & roll singer and songwriter Bill Haley started out his career as the frontman of Bill Haley and the Saddlemen, playing country and western music. The name was changed to Bill Haley and His Comets in 1952 as the band started performing rock & roll songs. The name “Comets” was imitative of the common mispronunciation of the famous Halley’s comet (sometimes written incorrectly as “Haley’s” comet). The group recorded “Rock Around the Clock” a year later, in 1953.

Rudi Gernreich was a fashion designer from Austria. Gernreich fled Austria due to Nazi influence, and ended up in Los Angeles. He is noted for design of the monokini, the first topless swimsuit.

Syd, or Syd tha Kyd, is the stage name of rapper Sydney Loren Bennett. I know nothing …

8. One of billions in a puffball : SPORE

A puffball is a type of fungus, so named because the spores are propagated in a dust-like cloud as its fruiting body matures and bursts open.

“John Le Carré” is the pen name of David Cornwell, an English author who is famous for his spy novels. Cornwell worked for British Intelligence during the fifties and sixties, even as he was writing his spy thrillers. He left MI6 soon after his most famous 1963 novel “The Spy Who Came in from the Cold”, became such a great success.

The terms “goosebumps” and “goose flesh” come from the fact that skin which is cold can look like the flesh of a plucked goose.

In French, an “état” (state) is an “entité politique française” (French political entity).

38. “Somebody who voluntarily walks into the unknown,” per Tom Hanks : HERO

“ER” is a TV medical drama that was created by successful novelist and screenwriter MIchael Crichton. The show had an original run of 15 seasons and featured quite a cast of actors who came and went over time. The cast included Anthony Edwards, George Clooney, Noah Wyle, Eriq La Salle, Julianna Margulies and Angela Bassett.

A pagan is someone who holds religious beliefs that are different from the main religions of the world. In classical Latin, “paganus” means “villager, rustic”.

The capital city of Zambia is Lusaka, located in the south-central part of the country. Lusaka grew from a village, the headman of which was named Lusaka.

Brazil is the largest country in South America, and the fifth largest country in the world (after Russia, Canada, China and the US). Brazil was a Portuguese colony from 1500 to 1815. The official name of the country under Portuguese rule was Terra da Santa Cruz (Land of the Holy Cross). However, European sailors used the name Terra do Brasil (Land of Brazil), a reference to the brazilwood tree that was much prized in Europe for the deep red dye that it produced.