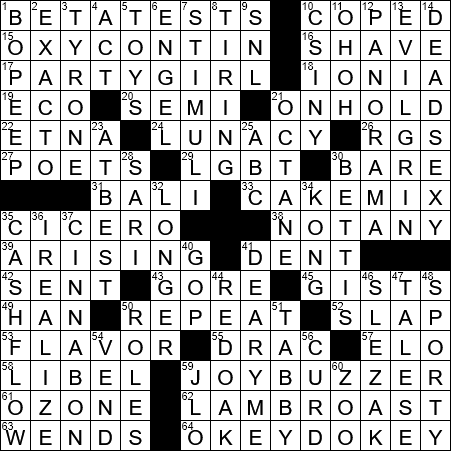 Percodan is a trade name for the combination drug oxycodone/aspirin. Percodan was introduced to the market in 1950, but has largely been replaced by Percocet, a combination of oxycodone with paracetamol.

Lydia and Ionia were ancient territories in a part of the world now covered by modern-day Turkey. Both territories eventually fell under Greek and then Roman rule.

22. Zeus trapped Typhon under it : ETNA

Typhon was known as the “father of all monsters” in Greek mythology, and he was married to the “mother of all monster”, Echidna. Typhon had a huge human torso with a hundred dragon heads. His lower body was made up of gigantic viper coils. Although all the gods feared Typhon, Zeus finally defeated him and trapped him underneath Mount Etna.

35. Roman who said “Any man can make mistakes, but only an idiot persists in his error” : CICERO

To gore is to pierce or stick with a horn or tusk.

The word “libel”, meaning a published or written statement likely to harm a person’s reputation, comes into English from the Latin “libellus”, the word for a small book. Back in the 1500s, libel was just a formal written statement, with the more damaging association arising in the 1600s.

A joy buzzer is also known as a “hand buzzer”. It’s that practical joke device that is hidden in the palm of one person before he or she shakes hands with another. When contact is made, a button on the device causes a wound spring to unwind creating a sudden vibration that might be mistaken for an electric shock. The joy buzzer was invented in 1928 by Danish American inventor Soren Sorensen Adams.

Chlorofluorocarbons (CFCs) are the propellants that were once used in aerosols. CFCs make their way up into the ozone layer and trigger a chain reaction that converts ozone (O3) into regular oxygen (O2). That conversion creates “holes” in the ozone layer. Regular O2 is good stuff, but we need O3 to absorb harmful UV radiation raining down on us. CFC is not good stuff …

Tyrone Power was a Hollywood actor from Cincinnati, Ohio. Power tended to play the romantic lead, as well as the swashbuckler that was so popular in the thirties. His career was interrupted during WWII when he volunteered to serve with the Marine Corps as a pilot. Power served with distinction and resumed his career after the war. He died on set, suffering a massive heart attack while filming a sword duel with his friend George Sanders. Power was only 44 years of age.

Georgia Engel is a very funny comedy actress who is best known for playing Georgette Baxter, wife of Ted Baxter, on “The Mary Tyler Moore Show”. Engel’s father was a vice admiral in the Coast Guard, and her sister was Miss Hawaii for 1967.

28. Garment whose name is often spelled with “ee” at the end : SARI

The Whig Party (in the US) was active from 1833 to 1856, and was the opposition party to the Democrats at that time. One of the tenets of the Whig Party was the supremacy of Congress over the Executive branch. Prominent members of the party included Presidents Zachary Taylor and John Tyler. Abraham Lincoln was also a Whig while he served a two-year term as a US Representative for the state of Illinois. By the time he became President, Lincoln was a member of the Republican Party.

The actress Erika Slezak plays Victoria Lord on the daytime soap opera “One Life to Live”. Slezak has been playing the role since 1971, for 40 years!

Gay Talese is an American author, famous as a journalist in the sixties at “The New York Times”. His 1971 book “Honor Thy Father” is a tale about the Bonanno crime family.

J.Lo is the nickname of singer and actress Jennifer Lopez. “J.Lo” is also the title of her second studio album, one released in 2001.