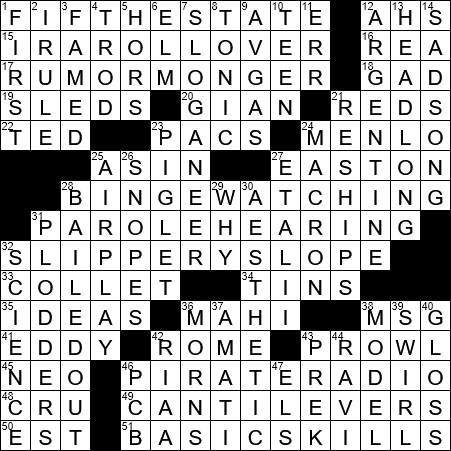 A rollover IRA is a subtype of a traditional Individual Retirement Account (IRA). The funds for a rollover IRA come from another qualified plan such as a 401(k) or a 403(b) account.

The first Winter Olympic Games was held in 1924, in Chamonix, France. The Winter and Summer Games were held in the same year until 1992, after which they were staggered so that we have an Olympic Games every two years.

Gian Lorenzo Bernini was an Italian sculptor and architect, one generally regarded as the successor to Michelangelo. Bernini’s most famous work perhaps is the design for the Piazza San Pietro (Saint Peter’s Square) that is located in front of Saint Peter’s Basilica in Rome.

Menlo Park, New Jersey is noted as the home to Thomas Edison’s laboratory where he made so many of his inventions. We also have a pretty well-known Menlo Park out here in California, home to many of the venture capital companies that tend to make a lot of money out of Silicon Valley businesses.

27. Pennsylvania city where the Delaware and Lehigh Rivers meet : EASTON

The Lehigh Valley metropolitan area in Pennsylvania is primarily composed of the three cities Allentown, Bethlehem and Easton.

33. Socket for setting a gem : COLLET

In the world of jewelry, a collet is a circular flange into which a gem is set.

Supposedly, there were seven separate settlements on the top of seven hills east of the River Tiber, prior to the founding of the city of Rome. Tradition dictates that Romulus founded Rome on one of these hills, namely Palatine Hill, and the city came to encompass all seven existing settlements. The most famous hill in modern-day Rome is probably Vatican Hill, but it lies outside of walled ancient city.

By definition, a neoconservative (neocon) is a former left-aligned politician who has moved to the right and supports the use of American power and military might to bring democracy, liberty, equality and human rights to other countries.

49. Projecting beams on a bridge : CANTILEVERS

A beam designated as a cantilever is one that is supported on only one end.

An hors d’oeuvre is the first course in a meal. “Hors d’oeuvre” translates from French as “apart from the work”, really meaning “not the main course”.

The first of the Amati family to make violins was Andrea Amati, who lived in the 14th century. He was succeeded by his sons, Antonio and Girolamo. In turn, they were succeeded by Girolamo’s son, Nicolo. Nicolo had a few students who achieved fame making musical instruments as well. One was his own son, Girolamo, and another was the famed Antonio Stradivari.