Constructed by: Alex Vratsanos
Edited by: Will Shortz 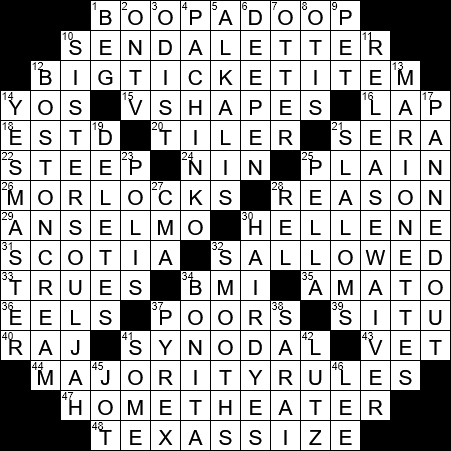 “Blondie” was created as a comic strip by Chic Young. It was first published in 1930, and is still being created today (although the strip is now controlled by Chic’s son, Dean). The strip spawned a series of radio programs (1939-1950) and a series of “Blondie” films (1938-1950). Blondie Boopadoop married her boyfriend Dagwood Bumstead in 1933. Dagwood slaves away at a construction company run by Julius Dithers, whose wife is named Cora. Another famous character in the strip is Elmo Tuttle, a pesky kid who is always bugging Dagwood.

You might remember Rocky Balboa saying, “Yo, Adrian!” in the original “Rocky” movie. Adrian was Rocky’s wife played by the lovely Talia Shire, sister of director Francis Ford Coppola.

In Italian, “pomeriggio” (afternoon) is followed by “sera” (evening).

24. Novelist who wrote “I have no fear of depths and a great fear of shallow living” : NIN

Pasquale Amato was an operatic baritone from Naples. Amato was at the height of his popularity while singing with the Metropolitan Opera in New York City, which he did from 1908 until 1921.

4. Its player may have a yen for gambling : PACHINKO

Pachinko is an arcade game as well as a gambling machine that is very, very popular in Japan in particular. It resembles a vertical pinball device into which a inserted steel balls.

5. Things that cover all the bases? : ALKALIS

The Boston cream pie was declared the official dessert of Massachusetts in 1996. And, it’s actually a cake, and not a pie at all.

13. Howdy Doody and others : MARIONETTES

A marionette is a type of puppet, one that is controlled from above by a series of strings or wires. The term “marionette” is French for “little, little Mary” and is probably a reference to one of the first such puppets, which depicted the Virgin Mary.
“Howdy Doody” is a children’s TV show that originally aired from 1947 to 1960. The show featured live actors as well as a whole host of puppet characters. There was also the Peanut Gallery, an invited audience of about 40 kids who sat on bleachers on stage while the show was airing.

17. Was successful in the end : PANNED OUT

The Greek word “polis” translates as “city”, although the term is often used in English to refer to the ancient Greek city-states.
Sparta was a city-state in ancient Greece that was famous for her military might. Spartan children had a tough upbringing, and newborn babies were bathed in wine to see if the child was strong enough to survive. Every child was presented to a council of elders that decided if the baby was suitable for rearing. Those children deemed too puny were executed by tossing them into a chasm. We’ve been using the term “spartan” to describe something self-disciplined or austere since the 1600s.

Pella is a manufacturer of windows and door headquartered in Pella, Iowa, whence the company name.

Country Music Association (CMA)
The Tennessee city of Nashville was founded in 1779 near a stockade in the Cumberland River valley called Fort Nashborough. Both the settlement and the fort were named for General Francis Nash, a war hero who died in combat during the American Revolution.

Bogotá is the capital city of Colombia. Noted for having many libraries and universities, Bogotá is sometimes referred to as “The Athens of South America”.

37. Material for a baking vessel : PYREX

Pyrex is a brand of glassware that was developed by Corning. As well as being used in bakeware and laboratory glassware, Pyrex is often the material of choice for optics in large telescopes used in astronomy. Corning’s PYREX (note the capital letters) is made from borosilicate glass, the main ingredients of which are silica and boron trioxide. Such Corning products are only available now outside of the US. Corning divested its consumer products division in 1998, resulting in the formation of World Kitchen. World Kitchen purchased the rights to the “Pyrex” name in the US, and market it as “pyrex” (all lowercase letters). So “PYREX” glassware is made from borosilicate glass, and “pyrex” products are made from cheaper tempered soda-lime glass.

A “jot” is something very small, from the Latin “jota”, which in turn is from the Greek “iota”, the smallest letter in the Greek alphabet.