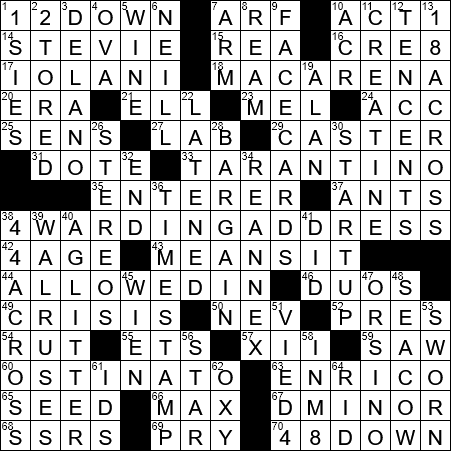 We have a rebus puzzle today, with numbers in some squares in the grid. Each themed answer is a reference to an “answer found elsewhere”. We write the clue for the themed answer in the spot given by that themed answer:

The great musician Stevie Wonder signed up with Motown Records when he was just 11-years-old. He has been remarkably loyal to the label and is still recording with Motown some 50 years later. The level of Stevie Wonder’s success is illustrated by his 22 Grammy Awards, the most Grammys awarded to a male solo artist. Wonder was born 6 weeks prematurely, and incomplete development of blood vessels in his eyes caused the retinas to detach leaving him blind soon after birth. His mother, Lula Mae Hardaway, co-wrote many of Stevie’s songs when he was a teenager, including “I Was Made to Love Her”, Signed, Sealed, Delivered I’m Yours” and “I Don’t Know Why I Love You”.

ERA Real Estate was founded in 1971 as Electronic Realty Associates, hence the abbreviation.

The University of Virginia sports teams are known officially as “the Cavaliers”. The unofficial nickname is “the Wahoos”.

27. Indoor place in which coats are worn : LAB

I’m not a big fan of director Quentin Tarantino. His movies are too violent for me, and the size of his ego just turns me right off. Having said that, I think “Pulp Fiction” is a remarkable film. If you can look past the violence, it’s really well written.

There have been twelve popes named Pius, the latest being Pope Pius XII. He led the Roman Catholic Church until his death in 1958.

In music, an ostinato is a piece of melody or a rhythmic pattern that frequently recurs in a piece. A favorite work in the classical repertoire that makes particular use of the ostinato form is Ravel’s “Bolero”.

The former Soviet Union (USSR) was created in 1922, not long after the Russian Revolution of 1917 that overthrew the Tsar. Geographically, the new Soviet Union was roughly equivalent to the old Russian Empire, and comprised fifteen Soviet Socialist Republics (SSRs).

Manatees, also known as sea cows, are very large marine mammals that can grow to 12 feet in length. The manatee is believed to have evolved from four-legged land mammals and probably shares a common ancestor with the elephant.

3. Name of a family from which Franklin Roosevelt was descended : DELANO

5. “One of the most civilized things in the world,” per Hemingway : WINE

Ernest Hemingway moved around a lot. He was born in Illinois, and after leaving school headed to the Italian front during WWI. There he served as an ambulance driver, an experience he used as inspiration for “A Farewell to Arms”. He returned to the US after being seriously wounded, but a few years later moved to Paris where he worked as a foreign correspondent. He covered the Spanish War as a journalist, from Spain, using this experience for “For Whom the Bell Tolls”. During the thirties and forties he had two permanent residences, one in Key West, Florida, and one in Cuba. In the late fifties he moved to Ketchum, Idaho, where he committed suicide in 1961.

Sam Neill is a very talented actor from New Zealand. I really enjoyed Neill in a 1983 television miniseries called “Reilly, Ace of Spies”, about a British spy operation during WWI. He is perhaps better-known for his roles in the movies “Omen III”, “Dead Calm”, “Jurassic Park” and “The Hunt for Red October”.

“The Piano” is a 1993 film set and filmed in New Zealand starring Harvey Keitel, Holly Hunter and Anna Paquin. The movie tells the story of a mute piano player and her daughter, and her efforts to regain her piano after it is sold. Holly Hunter managed to get three screen credits in “The Piano”. She was credited for her acting role, for playing her own piano pieces in the film, and for being the sign-language coach for young Anna Paquin.

“Wien” is the German for “Vienna”. Just like Berlin, Vienna was occupied by the four allied powers after WWII. In 1948, West Berlin was famously blockaded by the Soviet Union, leading to the remarkable Berlin Airlift that kept the city open. If the same thing had happened in Vienna, things would have been more complicated, as there was no airport in the western zone.

Orsino, Duke of Illyria is a character in William Shakespeare’s “Twelfth Night”. The opening lines of the play, spoken by the love-smitten Orsino, are: