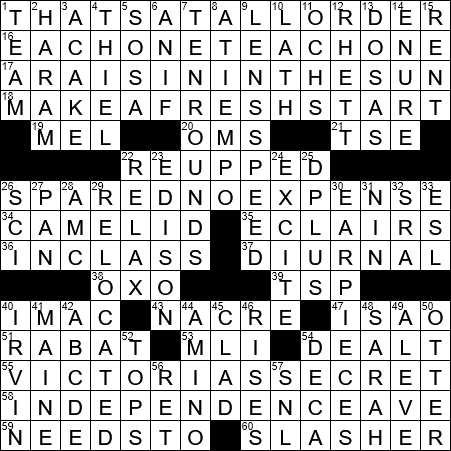 16. Rhyming educational proverb : EACH ONE TEACH ONE

“Each one teach one” is a proverb that dates back to the dark days of slavery in the US. Slaves were routinely denied any form of education. Any slave that did manage to learn to read or write, then it became his or her duty to teach another slave. Hence the phrase, “each one teach one”.

17. Classic 1959 drama with characters from Chicago’s South Side : A RAISIN IN THE SUN

“A Raisin in the Sun” is a 1961 film starring Sidney Poitier that is based on a 1959 play of the same name by Lorraine Hansberry. Both film and play follow the lives of an African-American family from Chicago as they struggle with the decision about what to do with an insurance payout following the death of the family’s patriarch.

The OXO line of kitchen utensils is designed to be ergonomically superior to the average kitchen too. The intended user of OXO products is someone who doesn’t have the normal range of motion or strength in the hands e.g. someone suffering from arthritis.

The Battle of Hastings took place in the South East of England in 1066. The battle took place between the native Anglo-Saxons led by King Harold Godwinson, and the Norman-French led by Duke William II of Normandy. William emerged victorious, earning him the moniker William the Conqueror. The victory also launched the Norman conquest of England.

Freddy Krueger is the creepy serial killer in the “A Nightmare on Elm Street” movies. Krueger has a burned and disfigured face, wears a brown fedora and a leather glove with metal razors that he uses to kill his victims during their nightmares. He is played by the actor Robert Englund in all of the films.

2. Not halal, in Arab cuisine : HARAM

“Halal” is a term for an action or object that is permissible under Islamic Law. In particular “halal” is used to describe food that can be consumed. Anything that is not allowed is described as “haram”.

“Mother Goose” is an imaginary author of nursery rhymes and fairy tales. Even though collections of “Mother Goose” tales have been published over the years, there is no specific writer who has been identified as her creator. “Mother Goose” is a very common pantomime that is staged in the British Isles in the Christmas season.

PayPal is an e-commerce business that has been around since the year 2000, born out of a merger of two older companies: Confinity and X.com. PayPal performs payment processing for online vendors. The company was so successful that it was the first of the beleaguered dot.com companies to successfully complete an IPO after the attacks of 9/11. Then in 2002, PayPal was bought by eBay for a whopping $1.5 billion.

5. One of Sports Illustrated’s two Sportsmen of the Year in 1998 : SOSA

Both Sammy Sosa and Mark McGwire were named Sportsperson of the Year in 1998 by “Sports Illustrated” magazine.
Sammy Sosa was firmly in the public eye in 1998 when he and Mark McGwire were vying to be the first to surpass the home run record held by Roger Maris. McGwire fell out of public favor due to stories of steroid abuse (stories which he later admitted were true) while Sosa fell out of favor when he was found to be using a corked bat in a 2003 game.

7. Length of the final fight in “Rocky Balboa” : TEN ROUNDS

If ever there was a movie that defines a career breakthrough for an actor, it would have to be “Rocky” for Sylvester Stallone. Stallone was a struggling actor in 1975 when a Muhammad Ali fight inspired Stallone to write a screenplay for a boxing movie, which he did in just three days. His efforts to sell the script went well but for the fact that the interested studios wanted a big name for the lead role, and Stallone was determined to be the star himself. Stallone persevered and “Rocky” was eventually made with him playing title role of Rocky Balboa. The movie won three Oscars, and “Sly” Stallone had arrived …

11. Phil who described himself as a “singing journalist” : OCHS

“Enure” is a variant spelling of “inure”, which means “to harden oneself against the effects of, to accustom oneself to”.

Fort Lee, New Jersey is located at the western side of the George Washington Bridge that spans the Hudson River. Fort Lee is known as the birthplace of the motion picture industry. The world’s first movie studio was built there by Thomas Edison, in a facility known as the Black Maria.

31. Writer who said “Living never wore one out so much as the effort not to live” : NIN

Michael Irvin played football for the Dallas Cowboys. I don’t follow American Football (forgive me!) but did see Irvin on “Dancing with the Stars” on television, and he acquitted himself quite well.

There seems to be some uncertainty how the US state of Maine got its name. However, the state legislature has adopted the theory that it comes from the former French province of Maine. The legislature included language to that effect when adopting a resolution in 2001 to establish Franco-American Day.
The Province of New Brunswick takes its name from the city of Braunschweig in Lower Saxony in northern Germany. Braunschweig, known as Brunswick in English, was the ancestral home of the British King George III.

Amino acids are essential to life in many ways, not least of which is their use as the building blocks of proteins.

The Hebrew name “Sarah” translates as “princess”, and also “lady”.