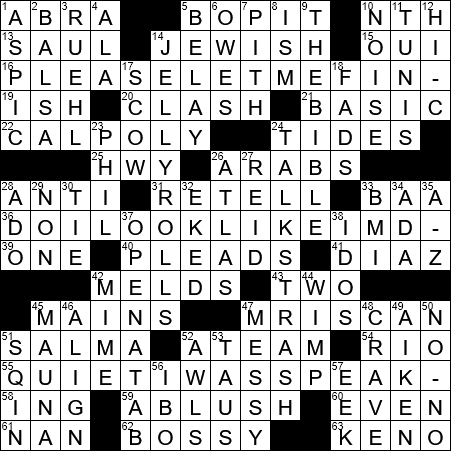 Themed answers are LINES spoken after an INTERRUPTION. And, those answers in the gird have also been interrupted, hyphenated and continued on the next line:

1. Start of a magic incantation : ABRA-

The incantation “abracadabra” has a long history. It was used as far back as the 2nd century AD in Ancient Rome when the word was prescribed by a physician to be worn on an amulet to help his emperor recover from disease. “Abracadabra” is Aramaic, and roughly translates as “I will create as I speak”.

5. Hasbro toy that involves pulling and twisting : BOP IT

Bop It is a line of toys with a speaker that issues commands to activate input devices on the toy, devices such as handles, cranks, wheels and switches. The commands come in a series of increasing length, and at increasing speed. So, I guess Bop It is a test of memory and dexterity.

“Better Call Saul” is a spinoff drama series from the hit show “Breaking Bad”. The main character is small-time lawyer Saul Goodman, played by Bob Odenkirk, who featured in the original series. “Better Call Saul” is set six years before Goodman makes an appearance in the “Breaking Bad” storyline. The lawyer’s real name is James Morgan McGill, and his pseudonym is a play on the words “S’all good, man!”

Cal Poly is more familiar name for California Polytechnic State University. There are actually two Cal Poly institutions, one in San Luis Obispo (the most famous) and one in Pomona.
The city of San Luis Obispo is one of the oldest communities in California. The name “San Luis Obispo” translates as “Saint Louis, the Bishop of Toulouse”. In 1990, San Luis Obispo was the first municipality in the world to ban smoking in all indoor public areas.

The card game called canasta originated in Uruguay apparently, with “canasta” being the Spanish word for “basket”. In the rummy-like game, a meld of seven cards or more is called a canasta.

“Rio” is a 2011 animated movie about a male blue macaw who is brought to mate with a female blue macaw in Rio de Janeiro, hence the movie’s title. Fans can go see “Rio 2” that was released in 2014.

A minuet is a dance that originated in France. At some point, the middle section of the minuet was routinely scored for just a trio of instruments. The resulting composition was known as a minuet and trio, and in the Classical Era was commonly chosen as the third movement of a symphony.

Nan Goldin is an American photographer who is based in New York, Berlin and Paris.

Aspic is a dish in which the main ingredients are served in a gelatin made from meat stock. “Aspic” is a French word meaning “jelly”.

Balsa is a very fast growing tree that is native to parts of South America. Even though balsa wood is very soft, it is actually classified as a hardwood, the softest of all the hardwoods (go figure!). Balsa is light and strong, so is commonly used in making model airplanes. Amazingly, in WWII a full-size British plane, the de Havilland Mosquito, was built largely from balsa and plywood. No wonder they called it “The Wooden Wonder” and “The Timber Terror”.

Tunis is the capital of Tunisia, and gives the country her name. Tunis is on the Mediterranean coast, and is located just a few miles from the site of ancient Carthage.
The Carthaginian Republic was centered on the city of Carthage, the ruins of which are located on the coast of modern-day Tunisia. The Latin name for the people of Carthage was “Afri”. When the Romans took over Carthage, they created a province they called “Africa”. That name extended over time to include the whole continent.

Hi-C orange drink was created in 1946, and introduced to the market in 1948, initially in the south of the country. The name Hi-C was chosen to emphasize the high vitamin C content in the drink, as it contained added ascorbic acid (vitamin C).

The famous Flemish geographer Gerardus Mercator published his first collection of maps in 1578. Mercator’s collection contained a frontispiece with an image of Atlas the Titan from Greek mythology holding up the world on his shoulders. That image gave us our term “atlas”.

Marcel Marceau was the most famous mime of all time, and a native of Strasbourg in France. He is perhaps most associated with the character Bip the Clown who he played onstage. Marceau made a cameo appearance in Mel Brooks’s “Silent Movie”, portraying himself. In the scene, Mel Brooks is asking Marceau to appear in his movie (a question asked silently of course, in subtitles), and Marceau turns to the camera and speaks the only word in the whole film, “Non!” (French for “No!”). The mime speaks! Brilliant …

Ada Lovelace’s real name was Augusta Ada King, Countess of Lovelace. She was the only legitimate child of Lord Byron, the poet. Lovelace was fascinated by mathematics and wrote about the work done by Charles Babbage in building his groundbreaking mechanical computer. In some of her notes, she proposed an algorithm for Babbage’s machine to compute Bernoulli numbers. This algorithm is recognized by many as the world’s first computer program and so Lovelace is sometimes called the first “computer programmer”. There is a computer language called “Ada” that was named in her honor. The Ada language was developed from 1977 to 1983 for the US Department of Defense.

The word “shebang” is probably a derivative of “shebeen”, an Irish word for a “speakeasy”, an establishment where liquor was drunk and sold illegally. In English “shebang” was originally a “hut” or a “shed”. Just how this evolved into the expression “the whole shebang”, meaning “everything”, is unclear.

When we run a “tab” at a bar say, we are running a “tabulation”, a listing of what we owe. Such a use of “tab” is American slang that originated in the 1880s.