Constructed by: Ryan McCarty & Alan Southworth
Edited by: Will Shortz 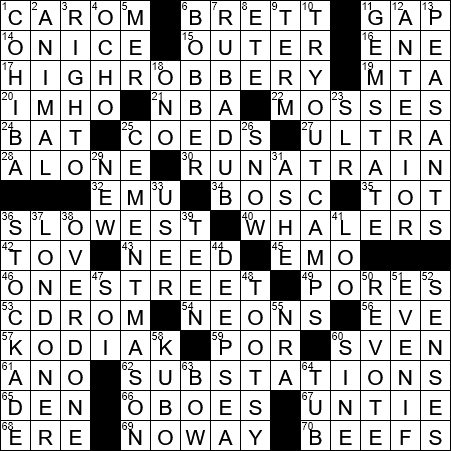 Themed answers are common phrases with the word WAY removed:

The original meaning of the word “interregnum” is the gap between the reign of a sovereign and his or her successor. The word has also come to mean a gap in continuity in general. Interregnum is from the Latin “inter” (between) and “regnum” (reign).

25. Some roles in the Jack Benny film “College Holiday” : COEDS

“College Holiday” is a 1936 movie with a great cast that includes Jack Benny, George Burns and and Gracie Allen. I’ve never seen the film, and I assume it’s a comedy. The cited storyline sounds a little sinister, though, through contemporary eyes:

A group of men are invited to spend the summer with a lady hotelier interested in eugenics.

32. Bird that has one long talon on each foot for fighting : EMU

Bosc is a cultivar of the European pear grown in the northwest of the United States. The Bosc is that pear with a skin the color of a potato, with a long neck. I always seem to use the potato as my point of reference. How Irish am I …?

The Carolina Hurricanes are the professional hockey team based in Raleigh, North Carolina. The team was founded as the New England Whalers, when they were located in Boston, and then Hartford, Connecticut. The Whalers moved to Raleigh in 1997, and became the Hurricane.

Della Street is Perry Mason’s very capable secretary in the Erle Stanley Gardner novels. Street was played on the TV show by the lovely Barbara Hale.
Picabo Street is an alpine ski racer from Triumph, Idaho who won medals at the 1994 and 1998 Winter Olympics.

56. Response to “Madam, I’m Adam” that is itself a palindrome : EVE

“Por favor” is Spanish for “please”.

Sven is a Scandinavian name. “Sven” is derived from the Old Norse word for “young man” or “young warrior”.

The brand name “Cohiba” is actually used by two cigar manufacturers. The first is produced by Habanos S.A. which is a state-owned tobacco company in Cuba. The second is produced by a US company in the Dominican Republic. The name “cohíba “ means “tobacco”.
Cuban leader Fidel Castro smoked the Cohiba brand of cigar, which comes from his native land. The cigars made for Castro and his top officials were produced under conditions of tight security. Apparently, back in the early sixties, the CIA actually worked on the development of exploding cigars as a means of assassination.

2. Category in a guessing game : ANIMAL

Animal, vegetable or mineral … or abstract? Those are the choices in the famous guessing game.

In Spanish, the number “ocho” (eight) is above the “operador” (operator) key of “un teléfono” (a telephone).

In French, “La Méditerranée” (the Mediterranean) is a “mer” (sea).
The Mediterranean Sea is almost completely enclosed by land, and is connected to the Atlantic Ocean by the narrow Strait of Gibraltar. The sea takes its name from the Latin “mediterraneus”, which means “in the middle of land”.

18. Fish at a Hawaiian barbecue : ONO

The wahoo is a cousin of the mackerel, and is known as the ono in Hawaii.

It is believed that the first snow globes were introduced in France in the early 1800s. They were a development of glass paperweights that were already common, and were initially used to do the same job. Do you know who owns the biggest collection of snow globes in the world, over 8,000 of them? That would be the actor Corbin Bernsen of “LA Law” and “Psych” fame.