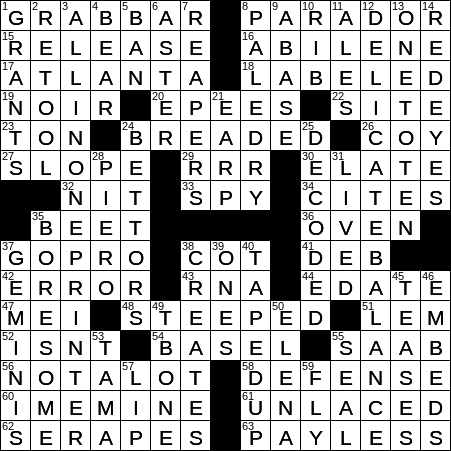 Today’s Theme: H in the Middle

The completed puzzle conceals the name of a famous composer, along with something that might help you listen to him. Who and what are they?

A neo-noir film is a contemporary film that incorporates elements of the film noir style of the forties and fifties.

An appurtenance is an accessory, perhaps a piece of equipment for a specific task. It might also be an appendage, a suffix to a word, for example.

“Deb” is short for “debutante”, which translates from French as “female beginner”.

We always seem to remember the phrase “The Eagle has landed”, historic words spoken by Neil Armstrong when he put down Apollo 11’s Lunar Excursion Module (LEM) on the surface of the moon. Looking back I have to say that the words preceding “The Eagle has landed” seem to have even more impact. During the descent to the moon’s surface Armstrong used the call sign “Eagle”, indicating that he was communicating from the LEM. After he killed the engines on touching down, Armstrong’s first words home to Earth were “Houston, Tranquility Base here. The Eagle has landed.” That switch of call sign from “Eagle” to “Tranquility Base” always sends shivers down my spine …

55. Car once advertised with the slogan “The relentless pursuit of common sense” : SAAB

“Bupkis” (also “bubkes”) is a word that means “absolutely nothing, nothing of value”, and is of Yiddish origin.

62. Wraps around the shoulders : SERAPES

Payless ShoeSource is discount shoe store that was founded in 1956 in Topeka, Kansas.

6. Flower whose name derives from the shape of its cluster : ASTER

Piero della Francesca was an Early Renaissance painter and mathematician from modern-day Tuscany in Italy.