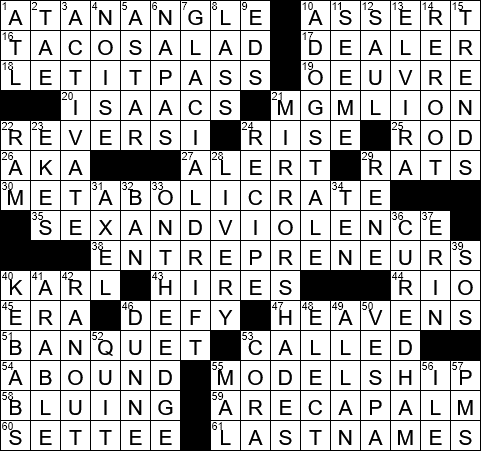 I’m not sure about this one. I think that it refers to a touchy (irritable) person being advised to “let it pass, let it go”.

The sum of an artist’s work in his or her lifetime is known as his or her “oeuvre”.

21. Corporate trademark that was inspired by an Ivy League mascot : MGM LION

38. Ones starting up start-ups, say : ENTREPRENEURS

An “entrepreneur” is someone takes on most aspects of a business venture, from the original idea to the execution. The term is imported from French, with “entreprendre” meaning “to undertake”. The original usage in English dates back to the early 1800s, when it applied to a manager and promoter of a theatrical production.

51. Occasion for a toast : BANQUET

A banquet is an elaborate feast. “Banquet” is a term that seems to have reversed in meaning over time. Coming into English via French from Old Italian, “banquet” is derived from “banco” meaning “bench”. The original “banco” meal was simply a snack eaten on a bench, rather than at a table. I guess we eat more these days …

“Settee” is another word for a couch. The term come from the Old English “setl”, which was a long bench with a high back and arms.

Sly and the Family Stone are a rock, funk and soul band from San Francisco that’s still performing today, although their heyday was from 1966 to 1983. They were one of the first rock bands to have a racially-integrated lineup, as well as representatives of both sexes.

“Cailín” is the Irish word for “girl”, and is usually anglicized as “Colleen”.

The tradition is that an editor writes corrections to written copy using a blue pencil. The practise arose with the introduction of the “non-photo blue” pencil, which had a color that did not show up in some photographic reproduction processes.

12. Anointed one in the Book of Samuel : SAUL

24. Something with a stirring message? : RECIPE

The Latin “recipere” means “to take”, and the imperative form “recipe” was written at the top of medical prescriptions as an instruction, i.e. take (the following). This use of “recipe” evolved into the instruction for preparing a dish of food in the mid-1700s.

Livery is the boarding and care of horses.

The combination of three dots – three dashes – three dots, is a Morse signal first introduced by the German government as a standard distress call in 1905. The sequence is remembered as the letters SOS (three dots – pause – three dashes – pause – three dots), although in the emergency signal there is no pause between the dots and dashes, so SOS is in effect only a mnemonic. Similarly, the phrases “Save Our Souls” and “Save Our Ship” are also mnemonics, introduced after the “SOS” signal was adopted.

Arable land is land suitable for farming. The term “arable” came into English from the Latin “arare” meaning “to plow”.

Irene Dunne was a wonderful, and beautiful, Hollywood actress. She played a variety of roles, but I always think of her as the leading lady with Cary Grant in the movies “The Awful Truth”, “My Favorite Wife” and “Penny Serenade”. Irene Dunne was great friends with fellow actress Loretta Young, and the two often attended church together. Dunne is often described as the best actress never to win an Oscar, even though she was nominated five times for the Best Actress Academy Award.

The celebrated American writer Edgar Allan Poe was born “Edgar Poe” in 1809 in Boston. Poe’s father abandoned Edgar and his two siblings after the death of their mother. As a result, Edgar was taken into the home of the Allan family in Richmond Virginia. His foster parents gave the future author the name “Edgar Allan Poe”.

“The Last of the Mohicans” is an 1826 novel by James Fenimore Cooper. It is the second in a series of five novels that comprise the “Leatherstocking Tales”. All five titles are: