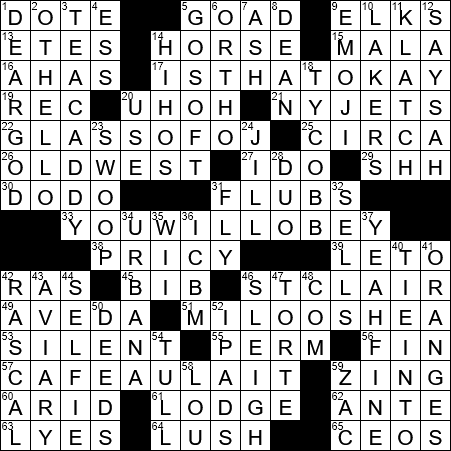 Themed answers rhyme with each other. Well, the last two syllables rhyme:

“Mala fide” is Latin for “in bad faith” and is in essence the opposite to “bona fide” meaning “in good faith”. Bad faith is a concept defined by the law that addresses the motives behind certain actions.

The legendary quarterback Joe Namath played most of his professional football games with the New York Jets. He was dubbed “Broadway Joe” in 1965 by offensive tackle Sherman Plunkett, a reference to Namath’s appearance on the cover of “Sports Illustrated”. Namath had played college football with the University of Alabama but left school without finishing his degree, to play professionally. Many years later he enrolled in Alabama’s External Degree program, and graduated with a BA in December 2007, at 64 years of age. Well done, Joe!

“Suicide Squad” is superhero film released in 2016, although the title characters are a team of DC Comics “antiheroes”. I haven’t seen the film (I don’t really do superhero movies) but the plot reminds my of 1967’s “The Dirty Dozen”. A government agency puts together a team of supervillains to carry out a dangerous mission in exchange for reduced prison sentences.

RAs are resident assistants or resident advisers, the peer leaders found in residence halls, particularly on a college campus.

45. Neckwear for a lobster eater : BIB

Milo O’Shea was a great Irish character actor from Dublin who has appeared in everything from “Romeo and Juliet” to “The West Wing”. O’Shea passed away in 2013, in New York City.

“Ulysses” is a 1967 movie based on the famous James Joyce novel of the same name. Milo O’Shea played the lead role of Leopold Bloom. The dialogue in the film is lifted almost word for word from the novel, which is probably why “Ulysses” is noted as the first mainstream film to use the “f***” word.

“Wotan” is an alternative (High German) spelling of the name Woden, the Anglo-Saxon version of the Norse god Odin. Wotan is the head god in the pagan tradition, but as paganism was gradually replaced by Christianity in the 7th and 8th centuries, Wotan moved from his place in religion and into the realm of folklore. Indeed, he is a precursor of our modern day Father Christmas. Wotan (Woden) also gave his name to Wednesday, Woden’s Day …

“Perm” is the name given to a permanent wave, a chemical or thermal treatment of hair to produce waves or curls. I don’t worry about such things, as it’s a number-one all over for me …

“Café au lait” (coffee with milk) is usually strong drip coffee to which one adds steamed milk. At least that’s the way we tend to make in this country.

The origin of the term “Holy Toledo!” is much debated. My favorite story is that it comes from the days of Vaudeville. Back then the week before Easter, known as Holy Week, was the worst week at the box office. Old Vaudeville entertainers used to quip that any week in Toledo was Holy Week, that ticket sales were always bad there. They referred to the city as “Holy Toledo”.

2. Board game named after a Shakespeare play : OTHELLO

A “klatch” (also “klatsch”) is a casual gathering, particularly for conversation. “Klatch” comes from the German “klatschen” meaning “to gossip”.

The baseball player Ty Cobb was born in Narrows, Georgia and died 74 years later in Atlanta, Georgia. He was nicknamed “The Georgia Peach”. Cobb was one of the richest baseball players of all times. When he retired, Cobb was a major stockholder of the Coca-Cola Corporation. By the time he passed away in 1961, Cobb had an even bigger investment in General Electric. He left an estate after his death worth about $86m (in 2008 dollars). The most common nickname associated with Cobb during his career was “the Georgia Peach”.

43. Where birds of a feather flock together : AVIARY

An aviary is a large cage that houses birds. “Avis” is Latin for bird.

A selfie is a self-portrait, usually one taken with a digital camera or cell phone. A “group selfie” is sometimes referred to as a “groufie” or “wefie”. A “couple selfie” is known as an “usie” or “ussie”, although those terms are sometimes also used for a group picture.

The commercial game of Monopoly is supposedly a remake of “The Landlord’s Game” created in 1903 by a Quaker woman called Lizzie Phillips. Phillips used her game as a tool to explain the single tax theory of American economist Henry George. The Landlord’s Game was first produced commercially in 1924. The incredibly successful derivative game called Monopoly was introduced in 1933 by Charles Darrow, who became a very rich man when Parker Brothers bought the rights to the game just two years later in 1935.

Jethro Tull is a rock band from the UK, formed in 1967 and active until 2012. The band uses the name of a 18th-century, English agriculturist.

“Skip to My Lou” is a children’s dance that can also be used at a barn dance as an icebreaker. Couples dance to the tune, with an extra male in the middle of the group. The odd man “steals” a lady with whom to dance, leaving her partner to find another. The word “lou” is the Scottish for “love”.