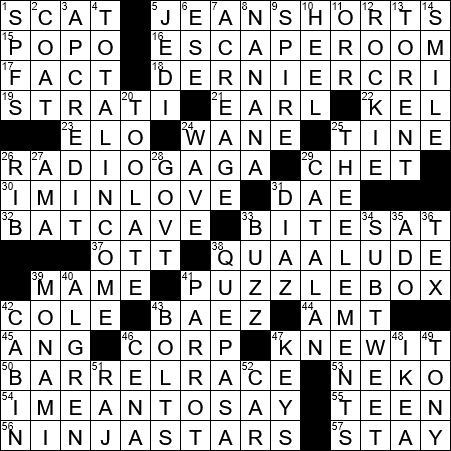 The French phrase “dernier cri” translates literally as “the latest cry or scream”, but is used to denote the latest fashion, something that is “all the rage”.

Stratus clouds (plural “strati”) are very common, and as they are wider than they are tall and flat along the bottom, we might just see them as haze in a featureless sky above us. Stratus clouds are basically the same as fog, but above the ground. Indeed, many stratus clouds are formed when morning fog lifts into the air as the ground heats up.

“Kenan & Kel” is a sitcom that aired on Nickelodeon from 1996 to 2000. It starred Kenan Thompson (now of “Saturday Night Live”), and Kel Mitchell.

“Radio Ga Ga” is a 1984 song by Queen that is a commentary on the demise of radio in favor of television. Singer Stefani Germanotta chose her stage name “Lady Gaga” from “Radio Ga Ga”.

The famous jazz trumpeter Chet Baker was noted for his heroin addiction, a problem that nearly put an end to his performing career. He managed a comeback in the late seventies, mainly appearing and recording in Europe. But he never kicked the drug habit and was found dead one day after falling from his hotel room window in Amsterdam.

“Smitten” is a past participle of “smite” meaning “to inflict a heavy blow”. We tend to use “smitten” to mean “affected by love, love-struck”.

Kim Dae-jung was the President of South Korea from 1998 to 2003. He had a policy of engagement with North Korea, and even even had an official meeting with Kim Jong-il in 2000 in Pyongyang. Although his approach, called the Sunshine Policy, did not appear to yield much success, his efforts earned him the Nobel Peace Prize in 2000.

At 5′ 9″, baseball legend Mel Ott weighed just 170 lb (I don’t think he took steroids!) and yet he was the first National League player to hit over 500 home runs. Sadly, Ott died in a car accident in New Orleans in 1958 when he was only 49 years old.

43. Female singer inducted into the Rock and Roll Hall of Fame in 2017 : BAEZ

Definitions vary, but it seems that Generation Z is reserved for the children of Generation X.

The term “Generation X” originated in the UK where it was the name of a book by Jane Deverson. Her book detailed the results of a study of British youths in 1964, contrasting their lifestyle to those of previous generations. It was Canadian author Douglas Coupland who was responsible for popularizing the term, with his more successful publication “Generation X: Tales for an Accelerated Culture”. By the latest accepted definition, Gen-Xers were born between 1961 and 1981.

3. Reward for an accelerated course, in brief : AP CREDIT

Our word “cad”, meaning “a person lacking in finer feelings”, is a shortening of the word “cadet”. “Cad” was first used for a servant, and then students at British universities used “cad” as a term for a boy from the local town. “Cad” took on its current meaning in the 1830s.

Francisco Franco was the dictator of Spain from 1936 to 1975, a reign of 39 years that made him the longest ruling dictator in the history of Europe.

In Spanish, “que pasa?” translates literally as “what happened?” But, it is used to mean “how have things been going with you?”.

Nelson Algren was an author from Detroit who is best known today for his 1949 novel “The Man with the Golden Arm”. The famous novel won the National Book Award and was made into a celebrated 1955 film of the same name starring Frank Sinatra. Algren also wrote a novel called “A Walk on the Wild Side”, the title of which was used in a great 1972 Lou Reed song.

43. Parts of a Frankenstein costume : BOLTS

48. Store with a three-syllable name in four letters : IKEA

Something described as “tony” is elegant or exclusive. “Tony” is derived from the word “tone”.