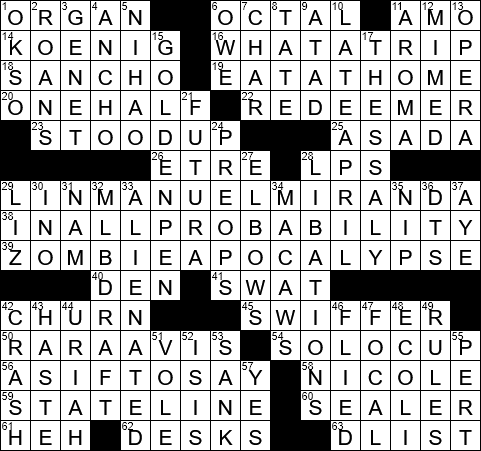 Bill’s time: Did not finish!

Bill’s errors: Missing 4-5 answers in the top-left after 60 minutes

The decimal number 64 is represented by 100 in the octal base 8.

That arrow is pointing at the number 20.

“Vous seriez” is French for “you would be”.

29. Winner of the 2016 Pulitzer Prize for Drama : LIN-MANUEL MIRANDA

Lin-Manuel Miranda is the creator and star of the hit Broadway musicals “Hamilton” and “In the Heights”.

“The Walking Dead” is a horror television show that is made by AMC that is based on a comic book series of the same name. There are lots of flesh-eating zombies featured, so I won’t be caught “dead” watching it …

41. Letters on some bulletproof vests : SWAT

SWAT is an acronym standing for Special Weapons and Tactics. The first SWAT team was pulled together in the Los Angeles Police Department in 1968.

Swiffer is a brand of cleaning products introduced by Procter & Gamble in 1999. The mainstays of the Swiffer cleaning system are the Swiffer WetJet mop and the Swiffer Sweeper.

A “rara avis” is anything that is very rare. The Latin term translates as “rare bird”.

The game of beer pong is also known as “Beirut”. Beer pong apparently originated as a drinking game in the fraternities of Dartmouth College in the fifties, when it was played with paddles and a ping pong net on a table. The origin of the “Beirut” name is less clear, but it probably was coined in while the Lebanese Civil War was raging in late seventies and the eighties.

58. Wife in F. Scott Fitzgerald’s “Tender Is the Night” : NICOLE

“Tender Is the Night” is a novel by F. Scott Fitzgerald that was adapted into a 1962 film starring Jennifer Jones, Jason Robards and Joan Fontaine.

2. Mounts with a little white on top? : ROANS

3. French novelist/dramatist associated with the Theater of the Absurd : GENET

“Theater of the Absurd” was a literary movement popular mainly in Europe from the forties through the eighties. Adherents to the style were inspired by Albert Camus’ Philosophy of the Absurd, which stated that the search for meaning and truth was absurd. Playwrights associated with the movement were Samuel Beckett, Harold Pinter and Edward Albee. I am not a big fan, not a fan at all …

An “ancho” is a dried poblano pepper. The poblano is a relatively mild chili.

The region of Greece known as Thessaly used to be called Aeolia, and appears in Homer’s “Odyssey” under that name.

The literal translation to the term “Bauhaus” is “House of Building”. It was a school (i.e. education establishment) that operated from 1919 to 1933. It became famous for its approach to design across many disciplines, everything from art to typography.

Back in the 14th century libation was the pouring of wine in the honor of a god. The term comes from the Latin word “libare”, which basically means the same thing. Nowadays we tend to use “libation” as a somewhat ornate word for a drink.

“30 Rock” is a sitcom on NBC that was created by the show’s star Tina Fey. Fey is an ex-performer and writer from “Saturday Night Live” and uses her experiences on that show as a basis for the “30 Rock” storyline. Fey plays Liz Lemon, the head writer for the fictional sketch comedy series “TGS with Tracy Jordan”.

Ino was a mortal queen of Thebes through her marriage to King Athamas. In Greek mythology, Ino became the goddess Leukothea after her death. As Leukothea she provided divine aid to Odysseus, according to Homer’s “Odyssey”. She provided Odysseus with a magical veil that he used to escape from Poseidon.

Macaws are beautifully colored birds of native to Central and South America, and are actually a type of parrot. Most species of macaw are now endangered, with several having become extinct in recent decades. The main threats are deforestation and illegal trapping and trafficking of exotic birds.

43. “Manners require time, as nothing is more vulgar than ___”: Ralph Waldo Emerson : HASTE

Ralph Waldo Emerson was an essayist and poet who was active in the mid-1800s. Most of the essays that Emerson wrote were composed originally as lectures and then revised for print. He is often referred to as “The Sage of Concord”, as Emerson spent much of his life in Concord, Massachusetts.

Uriah the Hittite was a soldier mentioned in the Bible, a soldier in the army of King David. Uriah was married to Bathsheba with whom King David had an affair. David had Uriah killed and then took Bathsheba as his wife. Bathsheba and David became the parents of Solomon who succeeded David as king.

Vole populations can really increase rapidly. Mama vole is pregnant for just three weeks before giving birth to litters of 5-10 baby voles. Then the young voles become sexually mature in just one month! If you have one pregnant vole in your yard, within a year you could have over a hundred of the little critters.