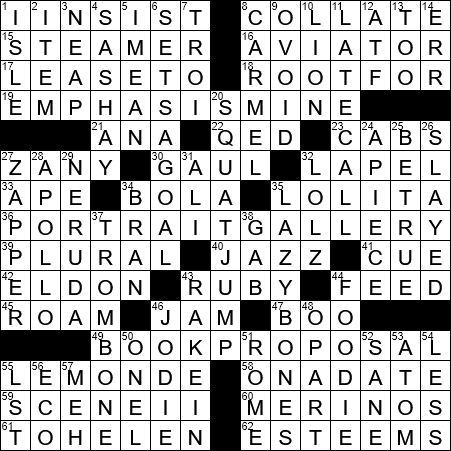 “Flat”, in the sense of an apartment or condominium, is a word more commonly used in the British Isles than on this side of the pond. The term “flat” is Scottish in origin, in which language it used to mean “floor in a house”.

Something described as zany is clownish and bizarre. “Zany” can also be a noun, a term used for a clown or a buffoon. The original noun was “Zanni”, a Venetian dialect variant of Gianni, short for Giovanni (John). Zanni was a character who appeared in comedy plays of the day, and was someone who aped the principal actors.

Soissons is an ancient town in northern France, located about 60 miles northeast of Paris.

36. One of the Smithsonian buildings : PORTRAIT GALLERY

The Smithsonian Institution was established in 1846 as the United States National Museum. The institution was renamed in honor of British scientist James Smithson who indirectly provided the initial funding. The funds were collected from England on the orders of President Andrew Jackson, and arrived in the form of 105 sacks containing 104,960 gold sovereigns.

“Mots croisés” is French for “crossword”.

59. When Caesar says “Yond Cassius has a lean and hungry look” : SCENE II

Here are some lines spoken by the title character in the play “Julius Caesar” by William Shakespeare:

Yond Cassius has a lean and hungry look.
He thinks too much. Such men are dangerous.

Caesar is referring to Cassius, one of the leading figures in the plot to assassinate him.

Edgar Allan Poe wrote two versions of his poem “To Helen”. The “Helen” in the poems might be the Greek goddess of light or perhaps Helen of Troy. If fact Poe wrote the poem in honor of Jane Stanard, who was the mother of one of his childhood friends.

The Carnival Cruise Line was founded in 1972, and now has over 20 vessels in operation. Three of those Carnival ships were chartered by the US government in the wake of Hurricane Katrina so that they could provided temporary housing for families displaced by the storm.

29. Poet who wrote “Tonight I can write the saddest lines” : NERUDA

Ayaan Hirsi Ali is a Dutch-American activist and author who was born in Somalia. One of Ali’s most notable campaigns is opposition to female genital mutilation.

To be garrulous is to be tiresomely talkative. To be reticent is to be inclined to keep one’s thoughts to oneself.

Actress Jodie Whittaker made a little history at the end of 2017. She took over from Peter Capaldi in the role of “Doctor Who”, becoming the Doctor’s thirteenth and first female incarnation.

“One L” is a name used in general for first year law students, especially those attending Harvard.

The initialism “LST” stands for Landing Ship, Tank. LSTs are the large vessels used mainly in WWII that have doors at either ends through which tanks and other vehicles can roll off and onto beaches. The design concept persists to this day in the huge fleet of commercial roll-on/roll-off car ferries, all inspired by the LST.