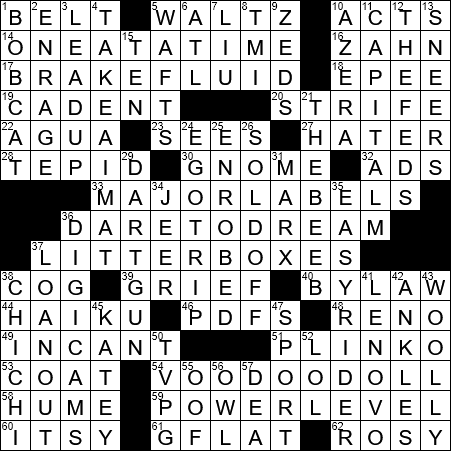 The lovely song “Moon River” was written by Johnny Mercer and Henry Mancini. It was sung by Audrey Hepburn in the wonderful 1961 movie “Breakfast at Tiffany’s”. The song went on to become the theme song for Andy Williams, who performed it at the Academy Awards ceremony in 1962.

16. One of the initial anchors of CNN’s “American Morning” : ZAHN

“American Morning” is CNN’s flagship morning show. It tries to differentiate itself from the competition by avoiding much of the banal “chat” between the news presenters, focusing more on the stories themselves.

In Spanish, one might drink some “agua” (water) as a chaser after taking “un trago de tequila” (a shot of tequila).

In English folklore, the fairy’s anti-hero is the diminutive gnome, an evil ugly character. Over the centuries, the gnome has become more lovable so we now have garden gnomes, and even the Travelocity Gnome.

39. Something good for Charlie Brown? : GRIEF

44. Writing form even more constrained than a tweet : HAIKU

A haiku is a very elegant form of Japanese verse. When writing a haiku in English we tend to impose the rule that the verse must contain 17 syllables. This restriction comes from the rule in Japanese that the verse must contain 17 sound units called “moras”, but moras and syllables aren’t the same thing. What the difference is though, is not so clear to me. Here’s an example of a Haiku:

48. City at the foot of the Sierra Nevada : RENO

The TV journalist Brit Hume’s full name is Alexander Britton Hume. He makes a lot of appearances on the Fox News Channel.

London’s Heathrow handles handles more international passengers than any other airport in the world, and is the third busiest airport around the globe in terms of passenger traffic (after Atlanta and Beijing).

The Hyundai Azera was the name used worldwide for the model known as the Hyundai Grandeur in its homeland of South Korea. The Azera was produced from 1986 to 1992.

Gmail is a free webmail service provided by Google, and my favorite of the free email services. Gmail made a big splash when it was introduced in 2007 because it offered a whopping 1GB of storage whereas other services offered a measly 2-4MB on average.

A “fed” is an officer of a US federal agency, although the term usually applies to an agent of the Federal Bureau of Investigation (FBI).

That would be pool.

31. Who said “Revolutions are the locomotives of history” : MARX

35. 1960s movie with the tagline “A man went looking for America. And couldn’t find it anywhere” : EASY RIDER

George Eastman founded the Eastman Kodak Company, named after the Kodak camera that he had invented four years earlier. He came up with the name of Kodak after careful consideration. Firstly he was a big fan of the letter “K”, calling it “strong, incisive”. He also wanted a word that was short, easy to pronounce and difficult to mispronounce, and a word that was clearly unique with no prior associations. “Kodak” fit the bill.

Someone who is “chichi” is showily trendy and pretentious. “Chichi” is a French noun meaning “airs, fuss”.

Katey Sagal played Peggy Bundy on “Married … with Children”. Later she took over as star of the show “8 Simple Rules” in the middle of its run, when John Ritter passed away unexpectedly in 2003. More recently, Sagal appeared on the FX drama “Sons of Anarchy”. In 2004, she married Kurt Sutter who created the “Sons of Anarchy” series.