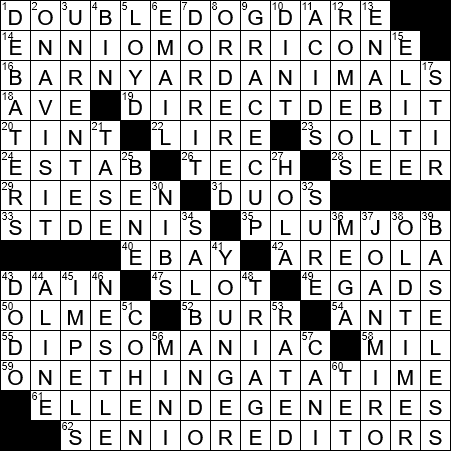 14. “The Good, the Bad and the Ugly” composer : ENNIO MORRICONE

See ‘n Say is a toy that was introduced by Mattel back in 1965. Mattel already had a line of “talking” toys, especially the very successful Chatty Cathy doll. All these toys spoke random phrases after a string was pulled. The See ‘n Say toy was a little different in that the child using the toy could choose which phrase they wanted to hear.

The word “lira” is used in a number of countries for currency. “Lira” comes from the Latin for “pound” and is derived from a British pound sterling, the value of a Troy pound of silver. For example, the lira (plural “lire”) was the official currency of Italy before the country changed over to the euro in 2002.

Naples (“Napoli” in Italian) is the third largest city in Italy. The name “Napoli” comes from the city’s Ancient Greek name, which translates as “New City”. That’s a bit of a paradox as today Naples is one of the oldest continuously-inhabited cities in the world.

26. One sector of the Dow Jones index : TECH

Riesen is a brand of chocolate that is produced and sold mainly in Germany, but is also sold here in the US. Riesen introduced a recipe for a hot chocolate drink in 2007. The recipe calls for melting the chocolate candy over heat in a saucepan, then adding one cup of milk per candy piece. Sprinkle nutmeg to taste.

Not only is Saint Denis (also “Denys”) the patron saint of France, but he is also the patron saint of Paris. Denis was the first Bishop of Paris, in the 3rd century AD, and was martyred by having his head chopped off. The legend surrounding this event is that the executed Denis picked up his head and walked for six miles, delivering a sermon the whole way.

StubHub! is an online ticket exchange business that is owned by eBay. StubHub! acts as the middleman between buyers and seller of event tickets, whether those buyers and sellers are individuals or large organizations.

Dashiell Hammett was an American author known for his detective fiction. Hammett was the creator of such enduring characters as Sam Spade from “The Maltese Falcon” as well as Nick and Nora Charles from “The Thin Man”. Outside of writing, Hammett was also politically active and serves as the president of a group the Civil Rights Congress (CRC) after WWII. The CRC was deemed to be a Communist front group and was listed as a subversive organization by the US government. At one point, he even served time in jail for contempt of court, after refusing to answer some questions in a trial in which the CRC was involved.

Bert Lahr’s most famous role was that of the cowardly lion in “The Wizard of Oz”. Lahr had a long career in burlesque, vaudeville and on Broadway. Remember the catchphrase made famous by the cartoon character Snagglepuss, “Heavens to Murgatroyd!”? Snagglepuss stole that line from a 1944 movie called, “Meet the People” in which it was first uttered by none other than Bert Lahr.

Aaron Burr was the third vice-president of the US, and served under Thomas Jefferson. In the final year of his term in office, Burr fought an illegal duel and killed his political rival Alexander Hamilton. Burr wasn’t brought to justice, but he did pay the price politically. Thomas Jefferson dropped him from his ticket in the election held the following year.

Dipsomania is a craving for alcohol to the point of damaging one’s health. “Dipsa” is the Greek for “thirst”, hence dipsomania is a “manic thirst”.

The thickness unit known as a “mil” here in the US is usually referred to as a “thou” on the other side of the Atlantic. A “mil” is actually one thousandth of an inch. I vote for “thou” …

1. Ones involved in forensics : DEBATERS

“Little Dorrit” is a novel by Charles Dickens. It is a satirical work that takes potshots at the government and society of the day.

A dint is an effort or power, as in “he made it by dint of hard work”. “By dint of” is a new expression to me, but it has been around since the early 1300s. I must have been out that day …

The Latin “forum” (plural “fora”) translates as “marketplace, town square”. “The Roman Forum” is the most famous example of such a space. The Forum is at the heart of the city of Rome is surrounded by the ruins of several ancient government buildings, and has been referred to as the most celebrated meeting place in the world.

Sal Bando is a former Major League Baseball player and baseball executive. After retiring as a player, Bando worked for while as a color analyst for NBC, working alongside Bob Costas.

The Powerball lottery game is available in most states of the US, as is its major rival called Mega Millions.

41. How hair dye may make you look : YOUNGER

Yeah, but only if you have some hair …

An A-line skirt is one that fits snugly at the hips and flares toward the hem.

The Toll House Cookie was first commercially produced chocolate chip cookie, and was the creation of chef Ruth Graves Wakefield in 1938. The name of the cookie comes from where Wakefield and her husband lived, the Toll House Inn in Whitman, Massachusetts.

Triage is the process of prioritizing patients for treatment, especially on a battlefield. The term “triage” is French and means “a sorting”.

Cass Elliot was one of the four singers in the Mamas and the Papas, a sensational group from the sixties. “Mama Cass” was performing sold-out concerts in London in 1974 when she was found dead one morning, having had a heart attack. She was only 32 years old. Eerily, Elliot died in the same flat (on loan from Harry Nilsson) in which the Who’s drummer Keith Moon would die just four years later.

Haiphong is the third largest city in Vietnam, after Ho Chi Minh City and Hanoi. Haiphong is in the northeast of the country and is an important seaport. “Haiphong” translates into English as “coastal defence”.