Constructed by: Lily Silverstein
Edited by: Will Shortz 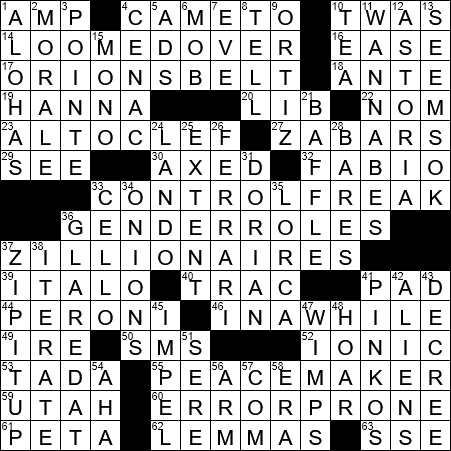 The receiver in a home entertainment system acts like the “nerve center” of the set up. The receiver is primarily for gathering sound inputs from all of your sound-producing devices (CD player, DVD player, VHS player etc.) and then processing and sending that sound signal to your collection of speakers.

“Guillaume” (William) is a common “nom” (name) in France.

“To 86” is American slang mean “to get rid of”. The term originated with Hollywood film crews who often used an 85 filter when shooting outdoors in daylight, to filter out UV radiation that can give a blue cast to film. A camera without a filter was said to have an “86 filter”, so that “to 86” meant to take something away.

As well as being an author, Italo Calvino was a famous Italian journalist. He was a supporter of communism and so wasn’t very popular in the US nor in Britain.

Gillette introduced the Trac II in 1971. The Trac II was the world’s first twin-blade razor.

The Peroni Brewery is based in Rome, although it was founded in Vigevano in Lombardy in 1846. Outside of Italy, Peroni is particularly popular in the UK.

55. Nickname of the B-36 bomber, ironically : PEACEMAKER

The Convair B-36 Peacemaker was a bomber built for the USAF and deployed from 1949 to 1959. With a wingspan of 230 feet, the B-36 is the largest combat aircraft ever produced. It was a piston-engined aircraft, and was replaced from 1955 with the Boeing B-52 Stratofortress.

The Utah Jazz professional basketball team moved to their current home in Salt Lake City in 1979. As one might guess from the name, the team originated in New Orleans, but only played there for five seasons. New Orleans was a tough place to be based because venues were hard to come by, and Mardi Gras forced the team to play on the road for a whole month.

“Pointe” is the name given to ballet dancing on the tips of the toes, and is a French term. A ballerina wears pointe shoes (sometimes “toe shoes”) to perform this delightful-looking, albeit unhealthy feat (pun!).

Wyatt Cenac is a comedian and writer from New York City who was raised in Dallas. Cenac worked for three years as a writer for the TV show “KIng of the Hill” before joining “The Daily Show with Jon Stewart” as writer and correspondent.

The Dominican-American baseball player David Ortiz has the nickname “Big Papi”. After each home run that Ortiz scores, he looks upwards and points to the sky, a tribute to his mother who died in a car crash in 2002 when she was only 46 years old.

12. Queens neighborhood in which “All in the Family” was set : ASTORIA

“All in the Family” is an American sitcom, and a remake of the incredibly successful BBC show called “Till Death Us Do Part”. Both the UK and US versions of the sitcom were groundbreaking in that the storyline brought into focus topics previously considered unsuitable for a television comedy, including racism, homosexuality, women’s liberation, menopause and impotence. “All in the Family” is one of only three TV shows that has topped the Nielsen ratings for five consecutive seasons (the other two are “The Cosby Show” and “American Idol”). Stars of the show are:

26. Big name in Formula One : FERRARI

“The Picture of Dorian Gray” is a novel by Oscar Wilde, in fact Wilde’s only novel. In the story, the title character is a young man appearing in a painting. Jokingly, Dorian sells his soul to the devil so that the painting would age rather than he.

The term “pinko” came to us courtesy of “Time” magazine, in 1925. Back then “pinko” was used to describe those who were politically left of center. Red was the color associated with the left going back to the 1800s (how times have changed!), and “pink” was assigned to people who were not aligned with the left politically, but had left-leaning tendencies.