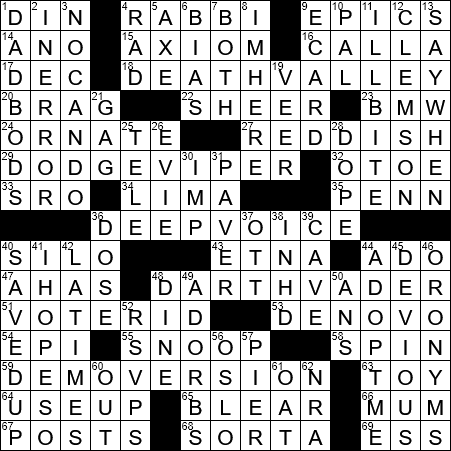 Themed answers are DEVIOUS (DV-ous?) in that they all comprise two-letter words beginning with the letters DV:

In the Jewish tradition, a yeshiva is an educational institution focusing on the study of sacred texts.

“Calla lily” is a common name for a lily of the genus Zantedeschia. There is a lily genus called calla, but the calla lily isn’t in it. Now that, that is confusing …

The polymer known as “nylon” was developed by Dupont in the 1930s. The first application for the new product was as bristles in toothbrushes, in 1938. The second application became more famous. The first stockings made from nylon were produced in 1940, and since then stockings have been known as “nylons”. The polymer was developed as a replacement for silk, which was to become in short supply during WWII.

The Otoe (also Oto) Native American tribe originated in the Great Lakes region as part of the Winnebago or Siouan tribes. The group that would become the Otoe broke away from the Winnebago and migrated southwestward, ending up in the Great Plains. In the plains the Otoe adopted a semi-nomadic lifestyle dependent on the horse, with the American bison becoming central to their diet.

35. Southernmost of the Ivies : PENN

The University of Pennsylvania (Penn or UPenn) was founded in 1740 by by Benjamin Franklin. Penn was the first school in the country to offer both graduate and undergraduate courses. Penn’s sports teams are known as the Quakers, or sometimes the Red & Blue.

43. Mount that has an insurance company named after it : ETNA

48. Film character who says “Give yourself to the dark side” : DARTH VADER

The “epicenter” is that point on the surface of the earth which is directly above the focus of an earthquake.

A spin room is an area where reporters can meet with candidates and their representatives after an election debate. Set up by the campaigns, a spin room is designed to influence the reporting of the debate in favor of a particular candidate. The first spin room was set up by the Reagan campaign in 1984, when President Ronald Reagan was being challenged for a second term by Walter Mondale.

Many folks who visit this website regard it as just that, a website. That is true, but more correctly it is referred to as a blog, as I make regular posts (actually daily posts) which then occupy the “front page” of the site. The blog entries are in reverse chronological order, and one can just look back day-by-day, reading older and older posts. “Blog” is a contraction of the term “web log”.

Clemson University was founded in 1889. The school takes its name from the town in which it is located: Clemson, South Carolina. The athletic teams of Clemson University have been called the Tigers since 1896 when a new football coach, Walter Riggs, arrived from Auburn University. Riggs was an admirer of the Princeton Tigers, so he gave his new school the tiger mascot.

We might call a little imp a rapscallion, an evolution from “rascallion”, which in turn comes from “rascal”.

46. Words and phrases that sound approximately alike, like “ice scream” and “I scream” : ORONYMS

“Oronym” is an informal term used for a a pair of phrases that sound identical, or almost identical. There is a marvelous British comedy sketch from the show “The Two Ronnies” that is built around oronyms. Know as the “Four Candles” sketch, it’s a favorite clip of mine …

“Adorbs!” is a colloquial term meaning “So cute, adorable!”

52. Replies to an invitation : RSVPS