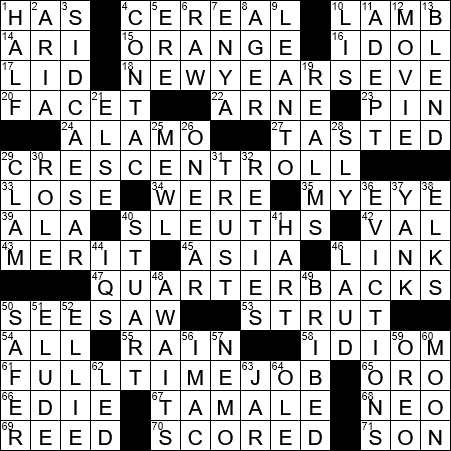 Today’s Theme: Phases of the Moon

Themed answers either are, or start with, a phase of the MOON:

The New Year’s celebration in Scotland is known as Hogmanay, although the term “Hogmanay” actually applies to New Year’s Eve. Such is the extent of the party for Hogmanay, that New Year’s Day is a public holiday across the country, and so is January 2nd.

“Rule, Britannia!” was a poem by James Thomson, for which Thomas Arne composed the famous music.

“Nurse Jackie” is a comedy-drama series centered on an emergency room nurse at a hospital in New York City. The lead character is played by Edie Falco, who also played Tony Soprano’s wife on the “The Sopranos”. I binge-watched “Nurse Jackie” a while back and found it to be a very well-written show …

Contac is a GlaxoSmithKline product used to treat the symptoms of a cold and influenza. The medicines active ingredient is pseudoephedrine. Pseudoephedrine is a drug with decongestant properties, although it is also a stimulant. Personally, I’d go with hot tea and lemon …

By definition, a lean-to is a building in which the rafters lean against the wall of another building. A lean-to shelter has a similar appearance, although it is free-standing. The shelter has a single-pitched roof and only three walls.

E. B. (Elwyn Brooks) White was an American writer. His most famous creations were the children’s stories “Charlotte’s Web” and “Stuart Little”, but he also co-authored the writing guide “The Elements of Style” (usually referred to as “Strunk & White”).

Although it is correct these days to say that the abbreviation IQ stands for “intelligence quotient”, the term was actually coined by German psychologist William Stern, so it actually is an abbreviation for the German “Intelligenz-Quotient”.

The actress Ellie Kemper’s big break came with the role of Erin Hannon, a receptionist on the sitcom “The Office”. More recently, Kemper has be playing the title role on the Netflix comedy series “Unbreakable Kimmy Schmidt”.

The Oreo cookie was introduced in 1912. The Oreo was intended to be a competitor to the very similar Hydrox cookie which had debuted four years earlier. The Oreo won the resulting battle on the grocery store shelves …