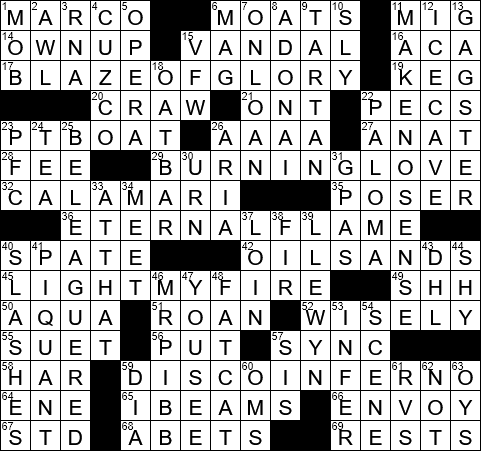 Happy New Year, everyone! Themed clues each refer to a “torch song”, a song with a “torch-ish” title, recorded by a famous artists or group:

Kublai Khan was leader of the Mongol Empire from 1260 to 1294. Kublai Khan was a grandson of Genghis Khan. Kublai Khan had a summer garden at Kanadu, which famously was the subject of the 1797 poem “Kubla Khan” by Samuel Taylor Coleridge.

6. Rings of water around castles : MOATS

A moat is a protective trench that surrounds a castle, say, or a an exhibit in a zoo. A moat may or may not be filled with water.

“Blaze of Glory” is a 1990 song by Jon Bon Jovi. It was Bon Jovi’s debut single, and made it all the way to number one in the charts. It was originally recorded for the soundtrack of the 1990 movie “Young Guns II” and subsequently became the title track of Jon Bon Jovi’s first solo album.

“Craw” is another name for the “crop”, a portion of the alimentary tract of some animals, including birds. The crop is used for the storage of food prior to digestion. It allows the animal to eat large amounts and then digest that food with efficiency over an extended period. The expression “to stick in one’s craw” is used one when one cannot accept something, cannot “swallow” it.

PT boats were motor torpedo boats: small speedy vessels that used torpedoes as their primary weapon against large surface ships. The “PT” stands for “Patrol Torpedo”. The most famous PT boats that served during WWII were probably PT-41 that carried General Douglas MacArthur and his family from Corregidor to Mindanao in his escape from the Philippines, and PT-109 that was commanded by Lieutenant John F. Kennedy, future President of the United States.

“Burning Love” is 1972 song first recorded by Arthur Alexander, but made famous when Elvis Presley released a cover version later that same year. The Presley version made it to the number-two spot in the charts, while Chuck Berry’s “My Ding-a-Ling” was number one. “Burning Love” was Presley’s 40th top-ten hit, and it turned out to be his last.

“Eternal Flame” was released as a single by the Bangles in 1989, after initially recording it as a track on their 1988 album “Everything”. The single made it to the top of the charts, almost three years after the group achieved the same feat with “Walk Like An Egyptian”. That made the Bangles only the third all-female band to have multiple number ones in the US, after the Supremes and the Shirelles.

“Light My Fire” was released by the Doors in 1966, and recorded Jose Feliciano did a Grammy-winning cover version in 1969. In one live performance by the Doors on “The Ed Sullivan Show”, the band agreed ahead of time to change the line “girl, we couldn’t get much higher” because of the drug reference. However, they sang the original words anyway, and were never asked back on the show. Ed Sullivan wouldn’t even shake Jim Morrison’s hand as he left the stage.

“Disco Inferno” is a 1976 song recorded by the Trammps that really only became popular after it was featured on the soundtrack of the 1977 film “Saturday Night Fever”. The lyrics of the song were inspired by a scene in the 1974 movie “The Towering Inferno”, in which a discotheque is consumed in the blaze.

“Sports Illustrated” is read by 23 million people every week, including a whopping 19% of adult males in the US. That’s every week, and not just the swimsuit issue …

The Men’s magazine known today as “GQ” used to be titled “Gentlemen’s Quarterly”. It was known as “Apparel Arts” when launched in 1931.

Tartan is sometimes called “plaid” over here in the US, and is a word not used in the same sense outside of this country. In Scotland a “plaid” is a blanket or a tartan cloth slung over the shoulder.

Gobbledygook is pompous, officious talk. The term is the 1944 invention of US Congressman Maury Maverick from Texas. He said he wanted to come up with a word that was imitative of a turkey.

The Veterans of Foreign Wars organization (VFW) is the largest association of US combat veterans in the US.

Paloma Picasso is a fashion designer based in Paris. Paloma is the youngest daughter of Spanish artist Pablo Picasso and French author and painter Françoise Gilot.

Something described as “beleaguered” is beset with troubles. More literally, the term means “besieged”, from the Dutch or Low German word for “camp around”.

They would all be Kardashians.