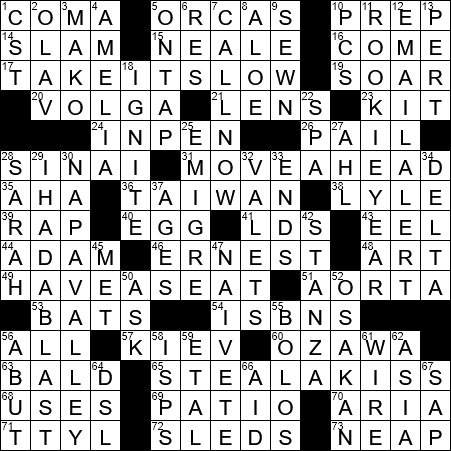 Themed answers are phrases that fit the generic clue “Disobey a …. order”:

The “Jack and Jill” nursery rhyme dates back at least to the 1700s:

Prior to 1945, the island that we know today as Taiwan was called “Formosa”, the Portuguese word for “beautiful”. Portuguese sailors gave the island this name when they spotted it in 1544. The official name for the state of Taiwan is the “Republic of China”.

As well as being famous in his own right as a successful country singer, Lyle Lovett is known for his marriage to the actress Julia Roberts in 1993. The pair had a whirlwind romance lasting just three weeks before they eloped and were wed. The marriage was also relatively whirlwind, lasting less than two years.

The vertebrae are the individual bones that give strength and flexibility to the spinal column. The word “vertebra” is Latin. The term probably derives from the verb “vertere” meaning “to turn”, the idea being that the individual bones in the back allow turning and twisting.

Lake Wobegon is a fictional town in central Minnesota that features in stories related by Garrison Keillor in the long-running radio show “Prairie Home Companion”.

Of the many kings of Norway named Olaf/Olav (and there have been five), Olaf II is perhaps the most celebrated, as he was canonized and made patron saint of the country. Olaf II was king from 1015 to 1028 and was known as “Olaf the Big” (or Olaf the Fat) during his reign. Today he is more commonly referred to as “Olaf the Holy”. After Olaf died he was given the title of Rex Perpetuus Norvegiae, which is Latin for “Norway’s Eternal King”.

The shortfin mako shark can appear on restaurant menus, and as a result the species is dying out in some parts of the world. The mako gets its own back sometimes though, as attacks on humans are not unknown. And the shark in Ernest Hemingway’s “The Old Man and the Sea”, that’s a mako. “Mako” is the Maori word for “shark” or “shark tooth”.

The Japanese company that we know today as Toshiba was formed in 1939 with the merger of Tokyo Electric and Shibaura Engineering Works. The “To-shiba” name comes from a melding of TO-kyo and SHIBA-ura.

Dwyane Wade is a basketball player who started his NBA career with the Miami Heat in 2003. Wade was chosen as the “Sports Illustrated” Sportsman of the Year in 2006.

42. One of four for “The Star-Spangled Banner” : STANZA