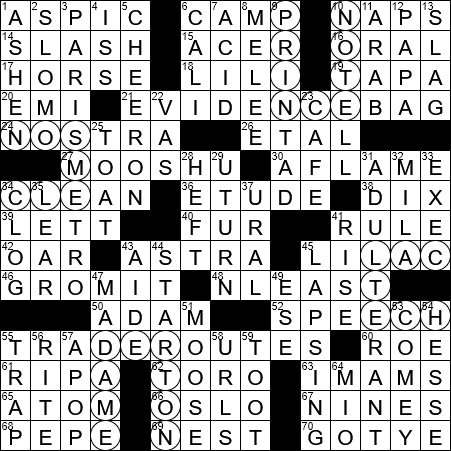 The circled letters in today’s grid spell out the name of universities. To make sense of those groups of circled letters, we need to see that they are in a U-shape, are making U-turns. That’s pretty apt, as each university might us the letter U as an abbreviation for “University”. The four U-niversities are:

Aspic is a dish in which the main ingredients are served in a gelatin made from meat stock. “Aspic” is a French word meaning “jelly”.

Acer is a Taiwanese company that I used to visit a lot when I was in the electronics business. I was very impressed back then with the company’s dedication to quality, although I have heard that things haven’t gone so well in recent years …

Dell, the computer manufacturer, is named after the company’s founder Michael Dell. Michael Dell started his company in his dorm room at college, shipping personal computers that were customized to the specific needs of his customers. He dropped out of school in order to focus on his growing business, a decision that I doubt he regrets. Michael Dell is now one of the richest people in the world.

“Charley horse” is a very American term for painful muscles spasms in the legs. The term possibly arose in the late 19th century, and may be named for baseball pitcher Charlie “Old Hoss” Radbourn who apparently suffered a lot from leg cramps.

The actress Lili Taylor had supporting roles in films like “Mystic Pizza”, “The Haunting” and “Rudy”. She also had a recurring role in the HBO series “Six Feet Under”.

“Mystic Pizza” is a coming-of-age film released in 1988. Included in the cast are Annabeth Gish and Julia Roberts. If you watch closely, you’ll also see Matt Damon speaking his first line in a movie. The title refers to the name of a pizza restaurant located in Mystic, Connecticut.

Apparently “Cosa Nostra” is the real name for the Italian Mafia. “Cosa Nostra” translates as “our thing” or “this thing of ours”. The term first became public in the US when the FBI managed to turn some members of the American Mafia. The Italian authorities established that “Cosa Nostra” was also used in Sicily when they penetrated the Sicilian Mafia in the 1980s. The term “mafia” seems to be just a literary invention that has become popular with the public.

“Fort Dix” is the name commonly used for what is now more correctly called Joint Base McGuire -Dix-Lakehurst, a US Army base located near Trenton, New Jersey. Fort Dix was established in 1917 by the Army, and was consolidated with nearby Air Force and Navy facilities in 2009.

39. Neighbor of an Estonian : LETT

55. The Silk Road and others : TRADE ROUTES

When Kelly Ripa secured the co-host spot on morning television with Regis Philbin, she was still acting in “All My Children” in a role she had been playing for over ten years. After a year of holding down two jobs, she eventually gave up the acting gig. Ripa has acted as spokeswoman for several brands over the years, most recently for Electrolux and Rykä.

Toro is a manufacturer of mainly lawn mowers and snow removal equipment based in Bloomington, Minnesota. The company was founded in 1914 to build tractor engines.

The term “to the nines” means “to perfection”. The first person to use the term in literature was Robbie Burns. Apparently the idea behind the use of “nines” is figurative (pun!), with the number nine considered “ideal” as it is arrived at by multiplying three by three.

3. Way to get from Gare du Nord to Gare de Lyon : PARIS METRO

In terms of population, Cali is the third largest city in Colombia (after Bogotá and Medellin). Santiago de Cali (the full name for the city) lies in western Colombia. Apparently, Cali is a destination for “medical tourists”. The city’s surgeons have a reputation for being expert in cosmetic surgery and so folks head there looking for a “cheap” nose job. Cali has also been historically associated with the illegal drug trade and money laundering.

The main ingredient in Tums antacid, made by GlaxoSmithKline, is calcium carbonate. Tums have been on the market since 1930. If you want to save a few pennies, Target brand antacid is identical to Tums, so I hear …

22. Some military hospitals, for short : VAS

The Department of Veterans Affairs (VA) was formed in 1930 to manage pre-existing government benefits affecting war veterans, some of which had existed since the days of the Continental Congress.

Mila Kunis is a Ukrainian-born, American actress, who plays Jackie Burkhart on “That ’70s Show”. Fans of the cartoon series “Family Guy” might recognize her voicing the Meg Griffin character. In ”Black Swan”, Kunis plays a rival ballet dancer to the character played by Natalie Portman. In her personal life, Kunis dated Macaulay Culkin for 8 years, but married Ashton Kutcher, her co-star from “That 70s Show”, in 2015.

Hermann Hesse was not only a novelist, but also a poet and a painter. His best known work is probably his 1927 novel “Steppenwolf”.

“‘O sole mio” is a famous Italian song from Naples, written in 1898. The song’s lyrics are usually sung in the original Neapolitan, as opposed to Italian. The title translates from Neapolitan into “My Sun” (and not into “O, My Sun” as one might expect). It’s a love song of course, sung by a young man declaring that there is a sun brighter than that in the sky, the sun that is his lover’s face. Awww …