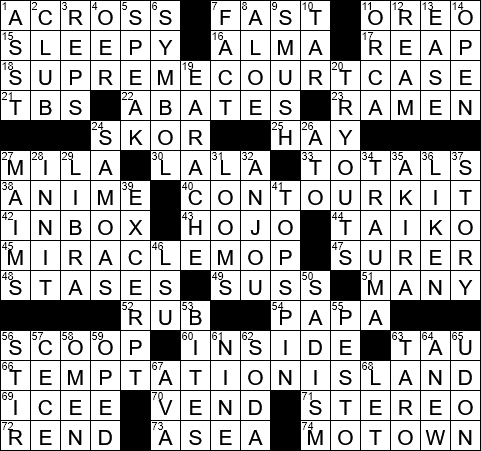 Each of today’s themed answers starts with a member of a famed Motown singing group:

You should see the word “Across” is you look above this clue.

21. Channel with a 24-hour “A Christmas Story” marathon on Christmas : TBS

Skor is a candy bar produced by Hershey’s. “Skor” is Swedish for “shoes”, and the candy bar’s wrapping features a crown that is identical to that found in the Swedish national emblem. What shoes have to do with candy, I don’t know …

“Mila 18” is a novel by American author Leon Uris that is set during WWII in Warsaw, Poland after the occupation by Germany. The book’s title refers to the bunker that served as headquarters of the Jewish resistance group in the Warsaw Ghetto. The bunker was located at “Ulica Mila 18” (“18 Pleasant Street” in English).

“La-la land” is a euphemism for a state of unconsciousness.

40. Product of assorted tones of makeup : CONTOUR KIT (The Contours)

The Contours were a Motown soul singing group who had a big hit with “Do You Love Me” in 1962.

The Howard Johnson (sometimes “HoJo”) chain of hotels and restaurants was the largest restaurant chain in the US in the sixties and seventies. There are only two HoJo restaurants left now. One is in Bangor, Maine and the other is in Lake Placid, New York. I just realized that I’ve been in both those restaurants …

The musical group known as the Miracles got together in 1955. The group was first called the Matadors, and was later known as Smokey Robinson & the Miracles. Their biggest hit was the great song from 1970 called “The Tears of a Clown”.

“Papa Don’t Preach” is a 1986 song recorded by Madonna. The song’s lyrics are based on teenage gossip heard outside the studio, chatter between schoolgirls from LA’s North Hollywood High School. Subjects mentioned in the words include teenage pregnancy and abortion.

The singing group known as the Temptations used to be known as the Elgins, and was formed in 1960 in Detroit. The group is still performing today, although only the second tenor, Otis Williams, was part of the original quintet. The Temptations were very much associated with their “sister group”, the Supremes.

71. Half of quadraphonic : STEREO

Monophonic sound (“mono”) is sound reproduced using just one audio channel, which is usually played out of just one speaker. Stereophonic sound is reproduced using two audio channels, with the sound from each channel played out of two different speakers. The pair of stereo speakers are usually positioned apart from each other so that sound appears to come from between the two. Quadraphonic sound (4.0 surround sound) uses four audio channels with the sound played back through four speakers often positioned at the corners of the room in which one is listening.

Motown Records is a record label that was founded in 1959 in Detroit (aka “Motor City” or “Motown”). The founder of Motown records was Berry Gordy, Jr.

The medical term for an earache is “otalgia”, a Greek word deriving from “otos” meaning “ear” and “algos” meaning pain”.

Depending on which bakery makes the particular variety of Girl Scout cookie, the name can vary. For example, Little Brownie Bakers makes the Samoa cookies, while ABC Bakers uses the same recipe and calls the cookies Caramel deLites. The assumption is that these cookies have the exotic name of “Samoa” because they contain the tropical ingredients of coconut and cocoa. The most popular variety of Girl Scout cookie sold are Thin Mints.

Lila Wallace founded the “Reader’s Digest” along with her husband in 1922, operating out of a basement office in New York City. The initial print runs were limited to about 5,000 copies. Today, “Reader’s Digest” has about 100 million readers in 163 countries worldwide.

The LSU Tigers are the sports teams of Louisiana State University (LSU). They are officially known as the Fightin’ Tigers, and the school mascot is “Mike the Tiger”. The name comes from the days of the Civil War, when two Louisiana brigades earned the nickname the “Louisiana Tigers”. Given the French/Cajun history of Louisiana, the LSU fans use the cheer “Geaux Tigers” instead of “Go Tigers”.

The term “pesto” applies to anything made by pounding. What we tend to know as pesto sauce is more properly called “pesto alla genovese”, pesto from Genoa in northern Italy. I love, love pesto sauce …

Gnocchi are small dumplings in Italian cuisine that can be made from various ingredients including potato, my personal favorite. The name “gnocchi” might be derived from the Italian “nocchio” meaning “knot in wood”.

The corm of some taro plants is used to make poi, the traditional Hawaiian dish (that I think tastes horrible). When a taro plant is grown as an ornamental, it is often called Elephant Ears due to the shape of its large leaves.