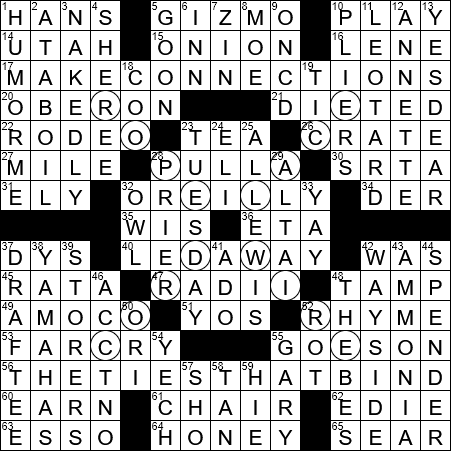 Today’s Theme: The Ties that Bind

Today’s grid is broken into four sections, one at each corner and one in the middle. Circled letters spell out four types of TIE. Those four TIES BIND the four corner sections of the grid to the center. The four ties are:

Oberon and Titania are the King and Queen of the fairies in Shakespeare’s “A Midsummer Night’s Dream”.

22. Event at which spectators may sit on straw bales : RODEO

Corporal Radar O’Reilly is a character in the “M*A*S*H” television series and film. The role was played by Gary Burghoff in both the film and on television.

“The Flying Dutchman” (“Der fliegende Holländer” in German) is an opera by Richard Wagner. The title character is a sailor who is cursed to sail the seas forever on a ghostly ship. A chance for salvation comes round once every seven years, if the Dutchman is able to find a wife who loves him. The Flying Dutchman’s ghost ship ties up alongside a vessel sheltering from an icy storm. The captain of the anchored vessel has a daughter of marrying age. Complications ensue …

“To tamp” means to pack down tightly by tapping. “Tamp” was originally used to specifically describe the action of packing down sand or dirt around an explosive prior to detonation.

The compact disc was developed jointly by Philips and Sony as a medium for storing and playing sound recordings. When the first commercial CD was introduced back in 1982, a CD’s storage capacity was far greater than the amount of data that could be stored on the hard drive of personal computers available at that time.

The marvelous actress Annette Bening is from Topeka, Kansas. Bening has been married to actor Warren Beatty since 1992. The pair married about a year after starring together in the 1991 film “Bugsy”.

23. What the “Mardi” of Mardi Gras means : TUESDAY

Eli Lilly is the largest corporation in the state of Indiana. The founder Eli Lilly was a veteran of the Union Army in the Civil War, and a failed Mississippi plantation owner. Later in life he returned to his first profession and opened a pharmaceutical operation to manufacture drugs and sell them wholesale. Under Lilly’s early guidance, the company was the first to create gelatin capsules to hold medicines and the first to use fruit flavoring in liquid medicines.

Al Lewis was the actor famous for playing Grandpa Munster on television’s “The Munsters”. Lewis was very active politically and even ran for Governor of New York in 1998 for the Green Party.

38. Some keyboards and motorcycles : YAMAHAS

“Ballyhoo”, meaning hype or publicity, was originally circus slang dating back to the early 1900s. No one really knows where the term comes from, but I can tell you there is a village in Co. Cork in Ireland called Ballyhooly!

The glass cleaner called Windex was introduced in 1933. The formulation sold up to the end of WWII had to be packed in metal cans because it was so flammable.

48. Ancient city on the Nile : THEBES

Thebes was a city in Ancient Egypt located on the river Nile, the ruins of which are now found with the bounds of the modern city of Luxor. The ruins of Ancient Thebes include the famous Luxor Temple and and Karnak Temple, as well as the Valley of the Kings and the Valley of the Queens.