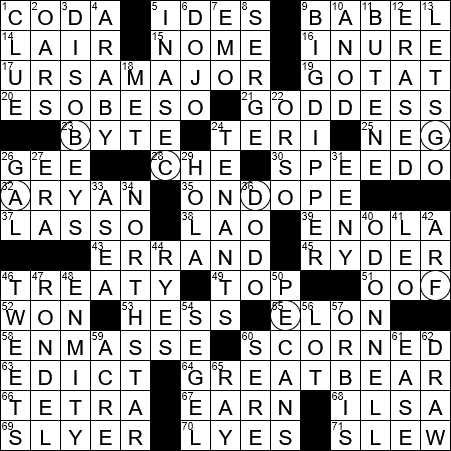 Themed answers relate to the constellation URSA MAJOR. Additionally, connecting the letters circled in the grid, in alphabetical order, reveals the shape of said constellation:

15. City on the Seward Peninsula : NOME

In 1899, the Alaska city of Nome was briefly known as Anvil City by locals to avoid confusion with the nearby city of Cape Nome. However, the US Post Office refused to approve the change, and so the name was immediately changed back to Nome.

17. Constellation next to Draco : URSA MAJOR

“Tootsie” is a hilarious 1982 comedy starring Dustin Hoffman in the title role, a male actor who adopts a female identity in order to land an acting job. Jessica Lange won a Best Supporting Actress Oscar for her performance in the film. “Tootsie” was also provided Geena Davis with her first movie role.

“Che” is a 2008 film about the life of the revolutionary hero Che Guevara. Starring Benicio del Toro in the title role, the movie is in two parts. The first part is called “The Argentine” and deals with the part Guevara played in the Cuban Revolution. Part two is called “Guerrilla” and covers Guevara’s attempt to foment revolution in Bolivia.

38. Language that becomes the name of where it’s spoken if you add an “s” : LAO

Myra Hess was a British pianist who earned the title of Dame due to her efforts to uphold morale in WWII. During the war all concerts were suspended due to blackout restrictions, so Myra Hess organized 1700 concerts that took place at lunchtimes throughout the conflict.

Lemmings are small rodents that live in cold climates, usually in or around the Arctic. There is a misconception that lemmings are prone to commit mass suicide. What is true is that like many animal species, lemmings are prone to mass migration, especially when the population in one area gets too great. Lemmings can swim, and will jump into a body of water in order to cross it. However, some lemmings may drown in the attempt. So, the lemmings jump en masse into a body of water to cross it, not to commit suicide. Then there was the famous Disney “White Wilderness” incident. Disney shot footage of lemmings “committing mass suicide” for the 1958 film “White Wilderness”. In fact, the lemmings in the morbid scene were flown to the location of the shoot, and were launched off a cliff using a turntable. Despicable …

Visine is a brand of eye drops made by Johnson & Johnson, advertised to “get the red out”. The red in the eye is reduced because Visine contains tetrahydrozoline hydrochloride, a vasoconstrictor. The blood vessels creating the redness constrict when Visine is applied, and you “get the red out” as the blood is “squeezed” away from the surface of the eye.

Butene (different from “butane”) is also known as butylene. One of the major uses of butylene is in the production of synthetic rubber.

The island of Hispaniola in the Caribbean, shared between Haiti and the Dominican Republic, is known in Spanish as “La Española”.

31. Start of a decision-making process : EENY

A ”lubber” is a clumsy person and a “landlubber” is a contemptuous term used by sailors for a man of the land. Sailors might call an inexperienced seaman a landlubber or perhaps just a “lubber”.

34. Thing located in the night sky by extending a line from circle F past circle G : NORTH STAR

We don’t get to see Rosie O’Donnell on the screen very much these days. She had a very successful chat show that ran from 1996 to 2002. My favorite performance of hers on the big screen is in a supporting role to Meg Ryan in the 1993 movie “Sleepless in Seattle”.

The garden flower called a “pansy” takes its name from the French word “pensée” meaning “thought”. This name was chosen as the flower was often used as a symbol of remembrance.