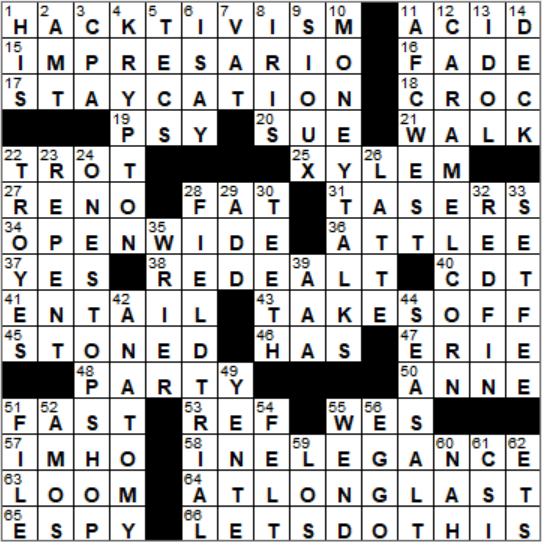 The term “liberal arts” dates back to classical antiquity. The liberal arts were those subjects deemed essential to master for a citizen to take active part in civil life. “Citizens” were “free people”, hence the use of the term “liberal arts”. The list of subjects studied in olden times were generally sevenfold: grammar, logic, rhetoric, arithmetic, geometry, music and astronomy/astrology.

Xylem is a vascular tissue in many plants, the function of which is to transport water and some nutrients. It is xylem tissue that makes up what we know as wood.

50. Sci-fi writer McCaffrey, who was the first woman to win a Hugo for fiction : ANNE

Anne McCaffrey is an American science-fiction author famous for her “Dragonriders of Pern” series of novels. McCaffrey emigrated to Ireland in 1970, and lives in a house of her own design in County Wicklow. She calls her home “Dragonhold-Underhill”.

The Hugo Awards are presented annually for excellence in science fiction and fantasy writing. The awards are named for Hugo Gernsback, founder of the sci-fi magazine “Amazing Stories”.

9. One signatory to the Treaty of Fort Laramie : SIOUX

The town of Fort Laramie, Wyoming is named for the trading post and military encampment of the same name that was located nearby. Fort Laramie was a stop on the Oregon, California and Mormon trails.

The Kansas City Chiefs were founded as the Dallas Texans in 1960 as a charter member team of the AFL. The Texans moved to Kansas City in 1963 and took the name “Chiefs”. The team owners (perhaps naively) expected to keep the Texans name in Kansas City but a fan contest opted instead for the Chiefs, named after the Kansas City mayor at the time, “Chief” Bartle.

George Lucas created a lead character named Indiana Smith for what was to be his “Indiana Jones” series of films. Lucas asked Steven Spielberg to direct the first film, and Spielberg wasn’t too fond of the name “Smith”. Lucas then suggested “Jones” as an alternative, and Indiana Jones was born.

22. French city where an English/French treaty was signed in 1420 : TROYES

The city of Troyes is located on the River Seine just under 100 miles southeast of Paris. The popular board game called “Troyes” was released in 2010 and is named for the historic city.

Our word “gossip” comes from the Old English “godsibb” meaning “godparent”. The term was then used for women friends who attended a birth, and then for anyone engaging in idle talk.

Amos is one of the twelve minor prophets in the Hebrew Bible.

The various types of textile known as felt are all made by matting, condensing and pressing fibers together.

“Los Olvidados” is a Mexican film directed by Spanish-Mexican filmmaker Luis Buñuel. The film follows a group of destitute children in the slums of Mexico City, and the violent life to which they are destined.