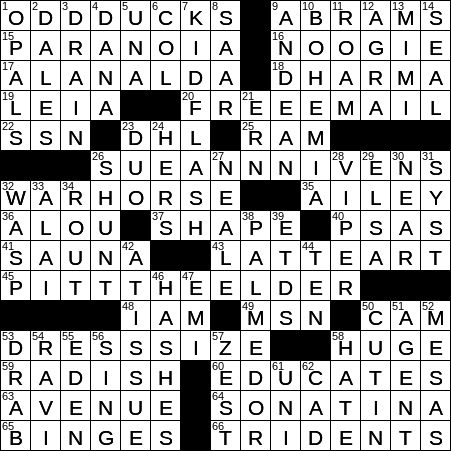 Themed answers include “TRI-D-E-N-T-S”, three occurrences of each of the letters D-E-N-T-S side-by-side as we progress down the grid:

16. Unpleasant accompanier of a headlock : NOOGIE

A “noogie” is that childish move where someone rubs his (and it’s always a guy!) knuckles into a person’s head to create a little soreness.

The comic actress Betty White has been at the top of her game for decades. White started her television career with an appearance with high school classmates on a local Los Angeles show back in 1939. Her most famous TV run was co-hosting the Tournament of Roses Parade, a gig she had for nineteen years in the sixties and seventies. Given her long career, White holds a number of records in the world of entertainment. For example, she is the oldest person to host “Saturday Night Live” (at 88) and she is the oldest woman to win a Grammy (at 90).

43. Craftsmanship from a barista : LATTE ART

Latte art is the name given to the designs that can be drawn on the surface of coffee drinks. Some of those designs can be quite intricate.

45. Moniker of an 18th-century British statesman : PITT, THE ELDER

65. Indulges in too much Netflix, say : BINGES

Kid Flash is a junior counterpart to the DC Comics superhero known as “The Flash”. Kid Flash was one of several young superhero sidekicks who were introduced in the late fifties after the success of Batman’s faithful companion Robin.

The Saar is a river that rises on the border between Alsace and Lorraine in France, flows through western Germany and finally enters the Moselle. Historically the Saar river valley was an important source for coal, iron and steel.

9. From the mountains of Peru : ANDEAN

10. European region that lent its name to a nonconforming lifestyle : BOHEMIA

On a railroad, shunting is the practice of moving carriages and other rolling stock from one line to another.

47. Big initials in the recording industry, once : EMI