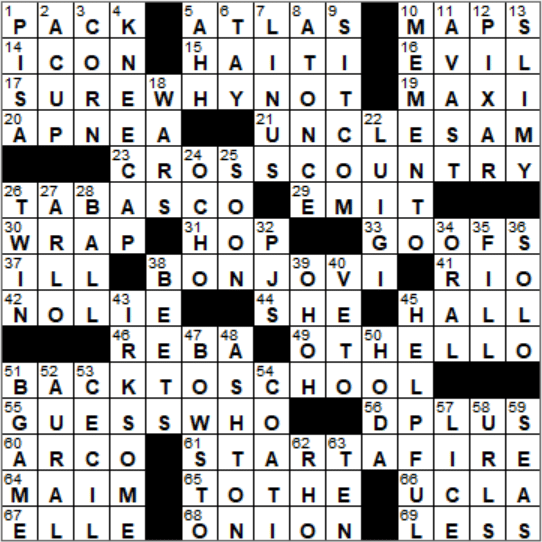 Themed answers START with a word that is often seen before FIRE:

Port-au-Prince is the capital of Haiti. The city was hit by a devastating earthquake in January of 2010. The official government estimate of the death toll stands at 230,000 people, with many bodies never recovered.

Edward McIlhenny created the first Tabasco Sauce in 1868. He recycled old cologne bottles as a container for the sauce so that he could present it to friends, and when he went into business he ordered new cologne bottles for the commercial product. Even today, the Tabasco Sauce bottle bears a striking resemblance to the bottle used to distribute 4711 cologne.

49. Board game with black-and-white pieces : OTHELLO

The company name “ARCO” stands for the Atlantic Richfield Company. One of ARCO’s claims to fame is that it is responsible for the nation’s largest Superfund site. Mining and smelting in the area around Butte, Montana polluted the region’s water and soil, and ARCO have agreed to pay $187 million to help clean up the area.

“LEGALLY blonde” is a 2001 comedy film starring Reese Witherspoon as a girlish sorority president who heads to Harvard to earn a law degree. “LEGALLY blonde” was successful enough to warrant two sequels as well as a spin-off musical that played most successfully in London’s West End (for 974 performances).

“The Onion” is a satirical news network, with a print newspaper and a heavy online presence. “The Onion” newspaper was founded by two college students at the University of Wisconsin-Madison in 1988. The founders sold the operation a year later for about $20,000. The paper grew steadily until 1996 when it began to publish online and really took off. I think it’s worth a tad more than $20,000 today …

The patella is the kneecap. “Patella” is the Latin name for the bone, and is a diminutive form of “patina”, the word for “pan”. The idea is that the kneecap is pan-shaped.

In Charles Schulz’s fabulous comic strip “Peanuts”, Charlie Brown is friends with at least three members of the van Pelt family. Most famously there is Lucy van Pelt, who bosses everyone around, particularly Charlie. Then there is Linus, Lucy’s younger brother, the character who always has his security blanket at hand. Lastly there is an even younger brother, Rerun van Pelt. Rerun is constantly hiding under his bed, trying to avoid going to school.

Arlo Guthrie is the son of Woody Guthrie. Both father and son are renowned for their singing of protest songs about social injustice. Arlo is most famous for his epic “Alice’s Restaurant Massacree”, a song that lasts a full 18m 34s. In the song Guthrie tells how, after being drafted, he was rejected for service in the Vietnam War based on his criminal record. He had only one incident on his public record, a Thanksgiving Day arrest for littering and being a public nuisance when he was 18-years-old.

The folk tale about “Cinderella” was first published by French author Charles Perrault in 1697, although it was later included by the Brothers Grimm in their famous 1812 collection. The storyline of the tale may date back as far as the days of Ancient Greece. A common alternative title to the story is “The Little Glass Slipper”.

Our word “pajamas” (“PJs” for short) comes to us from the Indian subcontinent, where “pai jamahs” were loose fitting pants tied at the waist and worn at night by locals and ultimately by the Europeans living there. And “pajamas” is another of those words that I had to learn to spell differently when I came to America. On the other side of the Atlantic, the spelling is “pyjamas”.

The verb “veto” comes directly from Latin and means “I forbid”. The term was used by tribunes of Ancient Rome to indicate that they opposed measures passed by the Senate.

The name C. S. Forester expands to Cecil Scott Forester. That said, both renditions are versions of the pen name of author Cecil Troughton Smith. Forester is is most famous for his stories about naval warfare, most notably his “Horatio Hornblower” series of novels. Forester also penned “The African Queen”, which famously was adapted into a 1951 movie starring Humphrey Bogart and Katharine Hepburn. A favorite movie of mine is 1960’s “Sink the Bismarck!”, which is based on a Forester novel “Hunting the Bismarck” …